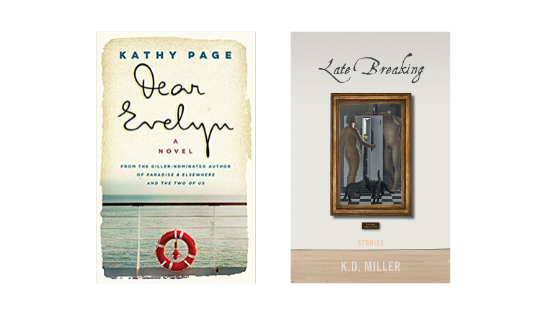 ‘Len Sparks has started to look forward to the advice column…. Reading about the situations people get themselves into charges him up in the morning. ‘Idiot!’ he will all but snort over his cereal. ‘How and why?’ With this beginning, K.D. Miller sets up her collected stories in Late Breaking. We too will be charged by her often moving, disturbing and sometimes funny explorations of the ‘situations people get themselves into.’

Inspired by the work of Alex Colville, each story is preceded by a painting that either directly or symbolically anticipates what follows. Miller says she was drawn to Colville’s ‘precise delineation, his almost-invisible brushwork, and above all the eerie, chill-down-the-spine effect of many of his paintings.’ She could be describing her own writing: while firmly grounded in realism, many of these skillful stories are unnerving. Her characters—often aging or elderly—struggle to negotiate their desires in bodies and lives that have both sustained and betrayed them, and late breakings abound as they confront things left, understood or learned late alongside the many and varied fractures that afflict us all as we age.

As in her previous collection, All Saints, the stories are loosely linked through recurring characters. For example, the absent lover alluded to in ‘Late Breaking’ is the lonely protagonist of ‘Octopus Heart’; in ‘Crooked Little House,’ his estranged daughter forges a tentative relationship with the paroled murderer of the daughter of an author, featured in the final story, whose book about octopuses intrigued the lost lover, and so-on. This six-degrees-of-separation approach isn’t merely a gimmick: the collection’s thematic heart, it seems to me, is expressed in its (literally) central story, ‘Higgs Boson’—a reference to what popularly became known as the ‘God particle.’ As someone explains, ‘Think of the adhesive property of glue…. Now think of something that makes that adhesive possible. That’s what the Higgs boson does…. Without it, apart would have no meaning. Because together would have no meaning.’ Everything is entangled/ment, further echoed by a couple’s marriage vows: ‘We will witness to each other’s lives.’ Throughout, Miller’s characters do witness and bear witness to illness, loss, violence and death, alongside life’s extraordinary and redeeming moments.

Transformations—both subtle and profound—unfold, but little about them is tender or soft. Often disparate and desperate characters collide. People (and sometimes creatures) function as emotional or psychological avatars wherein the broken sublimate their rage or longing: an old man, haunted by his dead wife’s infidelity, encounters a crude, angry youth at her graveside; an elderly artist, robbed and briefly terrorized in her cottage, finds the culprit and demands a surprising restitution; an emotionally stunted man in later middle-age forges an inexplicable but profound bond to an octopus at the aquarium. In the most disturbing story, ‘Lost Lake,’ Miller pushes the realism-envelope when a little girl’s parents encounter what are either ghosts or psychic visions of murder victims and a murderer. But her characters are all in some way haunted.

While All Saints was a finalist for the 2014 Rogers Writers’ Trust Fiction prize, and Late Breaking has recently been nominated for the 2019 Trillium Book Award, I’m surprised that Miller has not been more widely celebrated and recognized. Like Colville’s paintings or the stories of Alice Munro, her writing provokes questions: she invites us to think about her characters, speculate as to their motivations and actions, without offering tidy or pat conclusions. In the final story, a feisty nonagenarian wonders, ‘Maybe growing up, for many people, was a process of gathering their more interesting thoughts and questions, a good part of their imagination, and almost all of their curiosity, then packing it into boxes, putting the boxes inside a closet at the back of their mind, and locking the closet door. Finally, in many cases, forgetting where they put the key.’ Miller expertly unlocks the door but leaves her readers to cross the threshold.

A novel about a long and oft-fraught marriage, Kathy Page’s Dear Evelyn also deftly probes the tentacled heart with its complex vagaries of love and loss. Harry and Evelyn’s relationship rings true, perhaps in part because it is loosely based on Page’s own parents’ seventy-year marriage, one that became, as she has said in interviews, increasingly difficult and ‘argumentative.’ But then her mother gave Page a packet of letters her father had written while overseas during the war—fragments of which Page pulls into the narrative—inspiring a novel that won her the Rogers Writers’ Trust prize for fiction in 2018 and was shortlisted for the 2019 Ethel Wilson Fiction Prize.

Dear Evelyn explores the passing of time and the changing times of the past century, skipping across the decades, each chapter alighting upon and descending carefully into a particular period and scene. Page brilliantly conjures a sense of place—whether it be the African desert where Harry is stationed during World War II, the rural countryside where Evelyn escapes the Blitz with their infant daughter or London’s post-war suburbia. She also presents an almost ethnographic exploration of shifting cultural norms—as when Harry and Evelyn embrace the new consumerism of the 1950s, touting the glamour of formica and linoleum, much to the bemusement of their parents, or when they must navigate the changing sexual mores of the early 1970s.

This is ultimately more Harry’s story than Evelyn’s; while the point of view shifts between the two, and at times to one of their daughters, it belongs most often to him. The novel begins with the story of his birth and of his mother—who spills words into his infant ears—before moving to his formative years as a scholarship boy, where his love of language is further awakened by an eccentric teacher, an ex-soldier who voices what seems to become the novel’s ethos: ‘It’s good to feel things. Though the day must go on.’

Harry is both romantic and methodical, a lover of poetry and numbers, with a tremendous capacity for passion, tenderness and forbearance. His war letters to his young wife are expressive and erotic, and he remains faithful to her despite the vicissitudes of war. Upon his return, he thinks, ‘I hope not to be ground down by the peace. I want to stay alert. To love passionately. To go beyond myself.’ But Harry’s attempts to do so are increasingly opposed by Evelyn, with her dismissive relegation of his books to a single shelf—indeed, she repeatedly confines Harry to spaces she has designed and allocated. Harry succumbs to the conventions of marriage, his role as provider, and particularly, to the demands of a woman who remains incredibly dear to him despite herself. She is difficult—exacting, often unreasonable, incapable of self-examination, and only somewhat redeemed because Harry admires and loves her, accepting that she can be both kind and cruel, overly sensitive but with a ‘life force’ of which he remains in awe.

Harry seems, simply, too good for Evelyn. We understand the origins of her angst, haunted as she is by memories of an alcoholic, tubercular father and self-sacrificing mother.  But while her desperate need for order, control and the preservation of appearances is understandable, her failure to engage in any kind of honest self-exploration makes empathizing with her nearly impossible. At one point, in a chapter evocative of Betty Friedan’s The Feminine Mystique, Evelyn confronts the anxious thudding of her heart and realizes this is triggered ‘when people broke the rules, when they lied, when they ignored or seemed to mock what she had said…’; but while this insight might inspire reflection and growth, for Evelyn it functions as little more than justification for her petulance and growing bitterness. I can see she is frustrated by her lack of authentic agency, by her embrace of a limiting gender role and performance—but the novel does little to unpack this. We come back always to Harry and his astonishing love: ‘He had chosen her and continued to do so. What love was had changed to the point that he no longer understood it, though he knew its scale and depths, and knew that it was most of who he was.’

The novel’s ending is poignant, deeply moving but left me miffed again with Evelyn and sad for Harry. Ever philosophical and generous, he sees Evelyn as she is—‘tiny,’ with thick glasses and age spots—yet at the same time, perceives that ‘the woman who had lain beneath him on the grass, her firm breasts filling his hands, existed in her still.’ Harry never relinquishes his hopeful vision or his determination always to go beyond himself and his narrowed circumstances. The novel closes as he searches desperately for Evelyn’s last letter to him, lost as such things too easily may be.