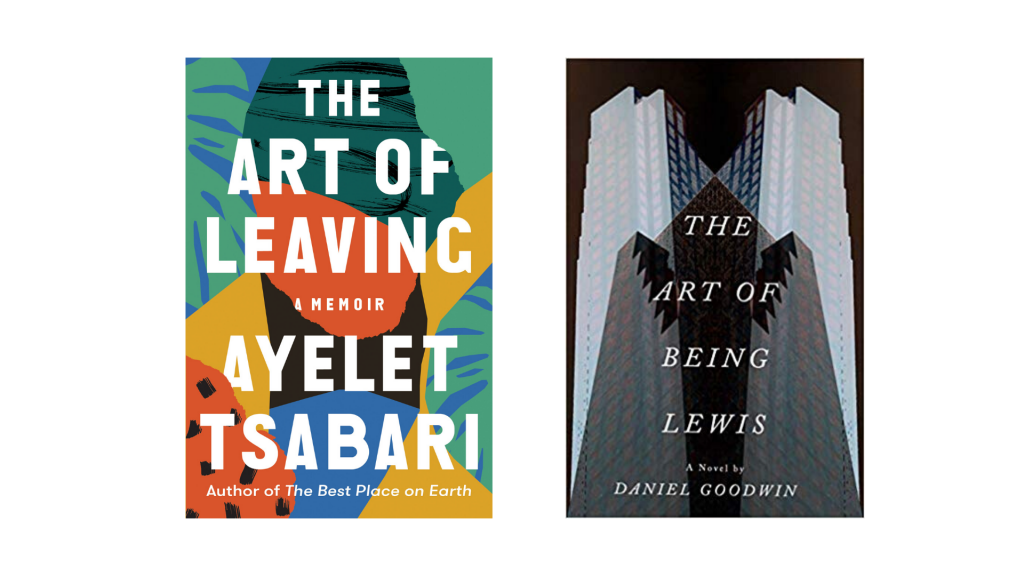 Daniel Goodwin, The Art of Being Lewis, Cormorant, 2019

Daniel Goodwin’s novel The Art of Being Lewis and Ayelet Tsabari’s memoir in essays The Art of Leaving share more than their echoing titles. Both Goodwin’s protagonist, Lewis Morton, and Tsabari lost a parent at a young age, and both struggle as a result to come to terms with their pasts and make sense of their heritage. These affecting books show that defining yourself isn’t something you do once and for all in early adulthood, but is an ongoing art.

Lewis Morton finds the perfect career in architecture because ‘it was [there] that his artistic impulse could be safely channeled and contained.’ He ‘embrace[s] what it meant to be an architect…to see the world as a vast space waiting to be enclosed, to channel light, the eye, and movement to find the balance between beauty and function.’ He has built an orderly life around his career at Drescher & Drescher, a firm that actually has only one Drescher, allowing Lewis to adopt his boss as a father figure. He has a lovely wife, Laura, four children and a modest Dutch neo-colonial house on a hill that gives it the air of ‘a well-designed castle built for defence.’ Lewis’s life is safe and stable.

Until one day his mentor dies in an accident that seems suspiciously like suicide, and Lewis learns that a big-name American architect is suing them for theft of intellectual property. Suspended from work while the lawsuit is pending, Lewis kills time by walking his dog to Tim Hortons for a large coffee, ignores Laura’s advice to use the restroom before heading home, and accidentally exposes himself to a group of teenagers when he stops for a desperate pee in the park. When he tries to apologize, they flee. (Could there be a more Canadian offense?) Much of the novel takes place as Lewis is in suspension, waiting for the twin wrecking-balls of the lawsuit and his accidental flashing to destroy the carefully constructed edifice of his life. He’s deeply anxious, of course, but he’s also forced to reckon with the reason he created a fortress of a life in the first place and to find a way to be a less constrained Lewis.

Lewis’s mother, Miranda, posed for other artists and painted nude self-portraits. He remembers feeling sick when a visiting friend exclaims, ‘Your dad has the most amazing room. The one full of paintings of naked women…. You should charge admission.’ While this is embarrassing, the family’s real trauma comes from Miranda’s hospitalizations for depression and her suicide attempts. The final, fatal attempt happens, coincidentally and symbolically, on the day Lewis quits art class. The teacher announces, ‘Today you are about to embark on a lifelong adventure: to capture the essence of what it means to be human,’ beginning by capturing themselves. He orders them to undress and draw themselves ‘completely exposed.’ Lewis gets as far as his socks and shoes, then retreats to the safe confines of architecture, hiding his ‘colourful and unpredictable…inner self.’ His accidental self-exposure in the park is the very thing he has guarded against all these years. Can he now let the more colourful Lewis out?

Lewis’s struggles to master ‘the art of being Lewis’ are funny and touching, but I wasn’t sure what to make of the role women played in his journey. Laura reminded me of the perfect wife of a hapless sitcom husband, chiding him maternally (why didn’t he use the Tim Hortons restroom as she’d suggested?). I wasn’t sure he ever grew into seeing her as more fully human. At a party, Lewis meets the father of one of the girls he’s accidentally flashed, who talks about his daughter’s trauma and how she had helped the police sketch artist. Our sympathy in this scene is directed to Lewis’s shame and anxiety about being recognized, not to father or daughter. Lewis’s act was unintentional, but in an era when there is much discussion of the violations men have gotten away with by denying wrongdoing, to focus on Lewis as the vulnerable one, however well the motif of self-exposure fits in the novel, is discomfiting.

While the fictional Lewis Morton reacts to his mother’s illness and early death by building a safe fortress of a life, Ayelet Tsabari responds to the loss of her father by making an art of leaving behind places, friends, and lovers before she can suffer another loss. ‘[L]osing Aba at an age when my identity was still entwined with his, when he was my homeland, made me feel exiled, displaced,’ she imagines telling her mother. ‘I am not done searching yet.’ These themes—exile and loss, wandering, the search for identity and home—recur throughout The Art of Leaving.

Tsabari’s estrangement from her homeland isn’t just a result of her father’s death when she was ten. She is a Mizrahi Jew, of Yemeni origin, in an Israel dominated by Ashkenazi Jews. In ‘A Simple Girl,’ she reflects on the stereotypical figure of the freha, a ditzy young woman with big hair and bold makeup, like the girls she sees in her Yemeni neighborhood with ‘their bodies bursting from their tight, revealing outfits and their gaits assured and all-sex.’ Teenaged Ayelet doesn’t want to be a dumb, sexualized freha. But in rejecting that stereotype, she risks cutting herself off at the root and from her roots. The term freha, she notes, ‘originated from a name common amongst women of North African descent (derived from the Arabic word for ‘happiness’)….’ In part, her memoir records her search for a way to be a bold, loud, sexy, happy Mizrahi woman on her own empowering terms rather than someone else’s denigrating ones.

Her travels allow Tsabari to try on different identities. In New York, people ‘speak to me in all kinds of languages,’ ascribing many national identities to her: ‘I like the idea of having a facial structure that is malleable, shifting, as though it makes me a citizen of the world. In my desperate wish to belong, I accept every invitation. But after a while, it makes me feel untethered, adrift, as though I no longer know the most basic thing about myself.’ One day, a store owner happily claims her as a fellow Yemeni, but he is Muslim and she doesn’t really belong with him either. As this rootlessness begins to trouble her more, Tsabari returns to Israel and listens to her grandmother’s stories, stories of abandonment by her own mother, of walking from Yemen to Israel. Loss and wandering connect them, creating a shared identity. Tsabari learns Yemeni songs and cooks her mother’s dishes; she allows herself to need someone, falls in love and has a child; long estranged by her wanderings from ease in a language, she finds her voice in English and begins writing again.

Summarizing The Art of Leaving this way makes Tsabari’s journey sound like a smooth, rather clichéd forward progress, but it’s more complicated and interesting than that. Most of these essays are in present tense, often with a final section in future (‘Later, I will…’). This choice creates a temporal dislocation for the reader: we know that Tsabari can only write about what will happen because she is looking back on it as past, but casting it as the future refuses the imposition of a fixed, retrospective meaning on her experience. Indeed, Tsabari is suspicious of this memoirist’s temptation. In ‘Soldiers,’ she writes that she has revised an earlier version of her story, which she had ‘reshaped…into one I could live with, omitting the parts that made me look like a jerk.’ It’s her refusal to settle into comfortable omissions that makes Tsabari’s book so engaging. Any resolution is tentative and provisional. By the end of The Art of Leaving, Tsabari has found home in her writing, in connection with her Yemeni Jewish roots, and in her husband and daughter. But these homes are no permanent fortress; they’re portable. Since completing The Art of Leaving, Tsabari has moved back to Israel, making the ‘Return’ of the book’s final section literal rather than metaphorical. I hope she will make new stories to tell.