Andrew French was born and raised in North Vancouver, British Columbia. French holds an Honours BA in English from Huron University College at Western University and is pursuing an MA in English at UBC. His poems and book reviews have recently appeared in Train: a poetry journal, The Lamp, The Hamilton Review of Books, PRISM International, and a number of other journals across North America and the UK. French grills his favourite emerging and established writers on Page Fright: A Literary Podcast.

Hannah Macready: Hi Andrew! How exciting it is that we get to do this interview. A little context for the readers—Andrew and I met through Twitter, of all places; that landscape of atrocity. Andrew was just beginning his literary podcast, entitled Page Fright, and he put a call out for contributors. I saw the post and thought, I know nothing about recorded words; I should certainly do this! And so we met at the VPL on Hastings Street, exchanged some laughs and books, made an entire episode out of it all, and in just a couple of weeks we will get to collaborate again during the live recording of Page Fright at Massy Books! To begin, can you tell us a little bit about the beginning of Page Fright, why you wanted to start it, and perhaps how, in a technical sense, you went about doing it. 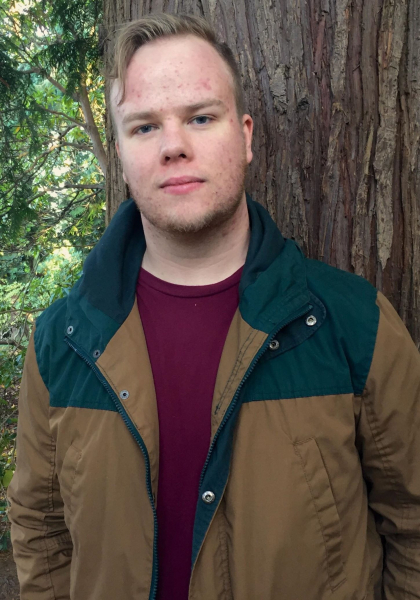 Andrew French: Hey Hannah, thanks for thinking of me for an interview—I love EVENT and could not be more excited to be doing this! Yes, you were brave (and maybe misguided?) enough to meet up with a random person from Twitter and talk about writing, and it produced one of my favourite Page Fright episodes. Thanks for doing that; it meant a lot to have you and others respond to the tweet I sent out looking for guests without any idea of what was going to come of it.

The simple reason for starting Page Fright was a selfish desire to feel less isolated. I moved back to Vancouver from Ontario in 2018 and started asking writers to grab drinks before starting the podcast, finding it super useful to get a bit of mentorship. I figured if I gave an author a chance to plug their work, they’d be a lot more inclined to sit down with somebody whose list of publications requires a magnifying glass to read, so I knew I wanted to do a podcast, reading series, or something that was kind of both. I was shocked at how easy it was to start a podcast…it really doesn’t take much. The hardest part was, and remains, booking guests. There’s free recording booths around town, and you can get yourself a website for a year and podcasting equipment for less than $200, so I didn’t feel super held back in starting Page Fright up. But we’re all busy people, writers or otherwise, so getting two people to line their schedules up always proves to be a tricky endeavour.

HM: I think one thing I have learned from my own interview processes is how diverse and unconventional writing backgrounds are. I don’t mean this simply in a cultural or academic sense either, but mostly how varied careers and approaches to writing as a practice can be. What is one thing that you’ve learned about writers since you started the podcast that you were surprised by?

AF: I think the one thing I’ve come to understand most through the podcast is the sense of community there is in the writing world. Even though I was writing almost every day for a couple of years before starting Page Fright, I felt like I had no writing friends until started talking to other writers, which is something I (falsely) believed I needed something like Page Fright to do. It shocks me, now that I consider myself somewhat involved with a community of writers through things like this interview, how much authors talk to each other, their publishers, et cetera. Everybody is reading everybody, supporting one another, and even though some folks feel competitive in the writing world, I’ve personally felt a ton of support and love in this environment that makes me so happy to do what I do.

HM: On that note, what is your writing practice? Page Fright has a bi-monthly trend going, which likely means you are constantly preparing for the next episode. On top of that, you’ve had some great publications this year, including train: a poetry journal, The Lamp, and Cascadia Rising, which means you must be doing the work! How, and where, are you doing it?

AF: You make me sound a lot better than I am here! The truth is that while I try to spend a lot of time writing, I’m also a student working on an MA, a high school tutor, and a low-skilled video game and hockey player, so writing time is precious. I remember my uncle telling me once that “you can never plan a time to cry because it just happens,” and I feel like that’s the same thing with getting ideas for poems and other writing pieces. When I get an idea, I try to respect it and give it time right then and there to become what it needs to become, but the things I’ve published have often been projects I’ve been working on for a really long time, so it’s a combination of immediacy and longevity. Writing ideas don’t come routinely, which is part of the fun of being a writer, but revision and editing can be blocked into your schedule and I do try to set aside time for that part of the process. I write and edit everywhere, except for at home. Coffee shops, libraries, buses, anything goes. Nothing interesting happens where I live though, so unless people want poems about me cooking unappealing vegetarian food, I do feel a need to get out into the world in order to do any creative work!

HM: What do you think the biggest challenge is to being a creative in this modern age? And then (a two-part question) What makes you want to create? 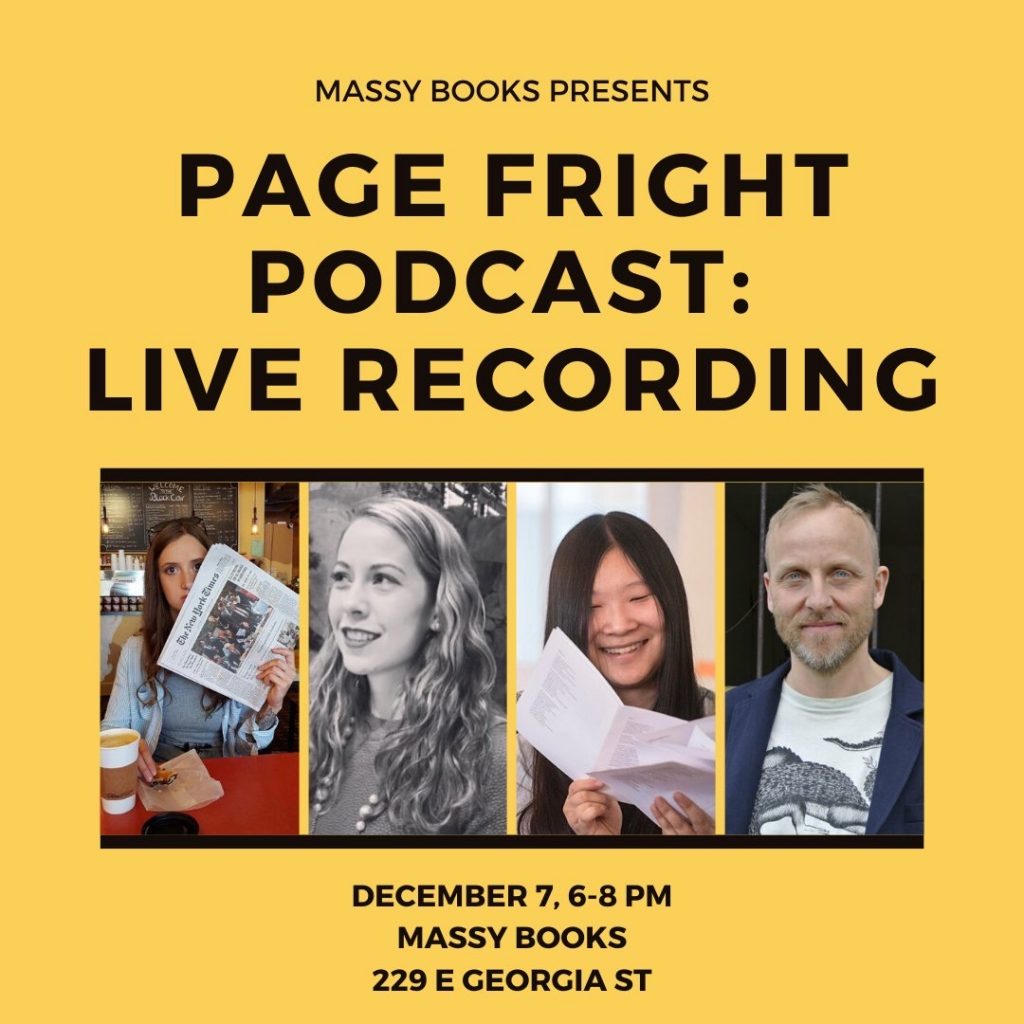 AF: It’s a weird time to be a writer…everything is so digital, and yet so many of us seem to want to make physical books. It’s funny—I’ve had a couple of online publications and host an online podcast, but my goal for the past three or so years has been publishing a chapbook or some other physical collection of poems, because I want to be able to hold something and know I created this tangible item with my words. Why on earth I have that urge after being raised alongside the internet, I have absolutely no idea! I’m personally dreaming of publishing physical books of my poems while being fully aware that a very small and statistically shrinking fraction of society wants them. I’m just inspired by the idea of my words being printed on a page, that’s what keeps me writing.

I also know how influential writers I follow have been in my life over the past few years in which I’ve considered myself a writer, and I think it would be the coolest thing ever to influence someone else positively with the words I string together. If my poems could make someone make it through a tough experience, rethink the way they see something, or even just appreciate a line, that would mean the world to me.

HM: CanLit has taken a lot of hits in the last few years. Abuse allegations, racism, ableism, etcetera. As someone who gets to spend a lot of time talking to Canadian writers, how do you feel about the current climate of CanLit, and how hopeful are you for its future?

AF: This is a great question. I’m writing an MA thesis right now with a focus on 1960s CanLit and feel pretty aware of how messed up our literature is and was as a result. I find it useful to remember that the only thing that has ever linked every Canadian writer to one another is a set of imaginary geographical lines…there’s not much else. Right now, I don’t feel a huge urge to create a literary class based on Canadianism—there are no borders online, and that’s where so much of our writing exists anyways. We’re at a point right now where our country’s literature is slowly being diversified, though, and I’m all for it. There will always be problems with trying to define a national literature (not everyone in a nation is going to be great), but I will say that the Canadian writers I’ve met and spoken with are interested in telling their stories as best as they can. I feel responsible for what I create, I want it to be a positive contribution to whatever CanLit is, and I try to get to know others who do the same.

HM: Finally, CAN WE GET A PLUG?

AF: Yes, of course! Come to Page Fright’s first live episode! Massy Books in Vancouver, December 7th, 6-8pm. Hannah and I both will be reading some stuff. Say EVENT sent you and I’ll give you a hug, or don’t…I’ll probably still ask you for at least a fist-bump! Everything I write and create is also up online at theandrewfrench.com, so check that out to decide if you like my writing or not.

Just hanging out with some of our very best pals,

EVENT seeks a Managing Editor to manage the day-to

Thank you to Vicki McLeod and J.G. Chayko for shar

Our Non-Fiction Contest is back! Submit your best

EVENT is proud to support Canadian authors across

On the cover: “Nordkjosbotn” by Ben von Jagow