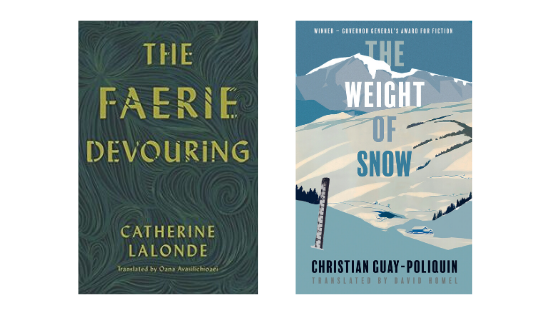 With Catherine Lalonde’s The Faerie Devouring and Christian Guay-Poliquin’s The Weight of Snow, we enter the dark ages in Quebec’s backwoods, those of the 1950s, the years of the ‘grand noirceur’ (Lalonde) and of a futuristic, post-apocalyptic world (Guay-Poliquin). Both are prize-winning works, poetic, harsh, dramatic, composed of short stark chapters, interspersed with myth (Guay-Poliquin), fairy tales and lullabies (Lalonde), hardscrabble Quebec rural life and ingrained Catholicism.

Lalonde’s text is a tour de force—prose poems, word spinners, which are viscerally, devouringly sexual and intensely lyrical. It is a feminist, iconoclastic fairy tale which exalts and poeticizes the female body and female desire, and provocatively envisions and embraces an exuberant (em)bodied innovative feminized language.

The little fuck of a sprite has become queen; a great dirty queen, like the river, mountain, rocks. She is a rebellious frond. From hunting, she’s learned how to change her sweat, a chameleon, into the scent of nettles and peat of St. Mother of Vinegar. It’s magic: the electric-blue petals of chicory flit up to her skull, crow of flowers, thorns or Medusa’s mane.

Opening with a curse or mantra uttered by the grandmother, ‘Fuck, It’s a girl,’ Lalonde announces the birth and unexpected survival of the unwelcome but determined ‘sprite,’ the only girl in a combined family of 5 boys, some adopted, one a ‘mongoloid.’ We watch the mother die in childbirth. The ‘sprite’ is grudgingly raised by a harsh, unsympathetic faerie grandmother, ‘the Old Crone,’ in a crowded primitive village house. We follow the sprite’s classic 1950s coming of age in ritual- and Catholic-obsessed, impoverished provincial Quebec. We tumble with her into tomboy adolescence as she defiantly hunts, fishes, explores forest and lake. We accompany her clandestine escape to the city and precarious street life, and finally, her prodigal return, as sole survivor of the family, to home and grandmother. The sprite’s homecoming culminates in an erotic and explosive paean to the female body which some may find disturbing rather than liberating. At the book’s close and at death, the grandmother now speaking in the voice of an oracle offers the sprite, in contrast to her opening utterance and curse, the gift of a vibrant female agency. Negative images, clichés and phrases about women and the feminine, such as witch and aged and crone, are insolently and mischievously validated and celebrated. Lalonde’s text gestures, intertextually, towards classic Quebec works such as Marie-Claire Blais’s famous revolutionary novel about a newborn in a poverty-stricken rural family, A Season in the Life of Emmanuel (1965), and towards the tradition of magical disruptive women as in Denise Boucher’s The Fairies are Thirsty (1978).

Although we may be swept up in Lalonde’s linguistic virtuosity and fluidity, she seems at times to revel in words and word play to excess. For example, here is a vista of the city as viewed by the sprite:

Astride on the roof of the skyscraper church…she remains fascinated by others… buskins, scyllas and sombreros; the nowhere women of Christmas in sequins, spangles, triple false eyelashes, curlers and spacesuits; the skinheads on stilettos, bearded kids, bleached-hair albinos, the muzhiks in crinolines, the topless with faux leather implants, virtual flying bears, hygienic sebum, ermines pumped with B negative, the pompadours and the mohawks….

But then perhaps excess is the point.

I want to draw attention to the translator’s own virtuosity and dexterity in rendering Lalonde’s densely poetic, experimental and semantically complex language. French nursery rhymes and lullabies are transformed into English ones, and passages such as the one above, with its neologisms, English expressions and echoes from other Quebec writers, are joyously and imaginatively rendered. For example, Avasilichioaei cunningly translates the appellation of the young girl, la p’tite, as the ‘sprite,’ which, unlike the French, is gender neutral but nevertheless conveys her sprightliness and spirit. Her ‘Translator’s Coda,’ the kind of explanatory note sometimes frowned upon in translations, is here a welcome and useful afterword to the tumultuous experience of this book.

In The Weight of Snow, we join another epic and arduous journey that takes us deep into the backwoods of Quebec. This is Guay-Poliquin’s second novel about a man desperately driving across Canada to Quebec and his ailing father during a nationwide blackout and time of anarchy and violence. The first novel, Running on Fumes (reviewed in EVENT 46.1), ended with the protagonist arriving at last in his village, badly injured in a car accident whose significance is gradually revealed. This novel takes up the story as the man, close to death, recuperates in a shelter outside the village (the summer kitchen of a manor house). He is tended, unwillingly, by an old man, Matthias, who has somehow also drifted into this village and who agrees to nurse the protagonist in exchange for a seat in a van that will supposedly transport him back to the city and his hospitalized wife at some unspecified future date. It is winter, provisions are scarce; the village, hidden deep in the forest, is temporarily safe from outsiders but subject to deadly illness and desertions. Rumours, betrayals and disputes threaten communal coherence and survival. Villagers escape clandestinely bit by bit through the long harsh winter, leaving only Matthias, the wounded man, ‘simple’ Jonas and a handful of ill and dying inhabitants. The author and translator adeptly find many effective ways to describe snow, the frozen, inhospitable yet striking landscape, the storms, the cold, the young man’s suppurating wounds and slow healing, and the battle for survival in a claustrophobic, rickety shelter with a diminishing food supply.

It has been snowing for two days. The mountains that curve above the village and the line of the forest have disappeared from sight. The snow hurries to reach the earth and the immensity of the landscape has narrowed down to the four walls of this room.

Night has fallen. The snow keeps falling, but it has taken on shadows. Strange, but a weak glow illuminates the bottom edge of the sky…. A vague halo through the crests of the trees, and snowflakes harried by the wind.

After several chapters containing such vivid chilling descriptions, one cannot help but reflect on the many words for snow in Inuit languages. The short terse chapters increase the narrative tension and the tension between the two men who are reluctantly bound together and must face the elements of fire, water, wind, often with ingenuity. Matthias’s personality gradually emerges with clarity and complexity, but the protagonist remains somewhat impenetrable.  Guay-Poliquin skillfully creates a gripping narrative of this struggle for survival through his precise, unrelenting detailing of physical and psychological ordeals and victories.

As in the earlier novel, The Weight of Snow is framed by the myth of Daedalus and Icarus in the Labyrinth and their miraculous, risk-laden escape. One wonders who of the two men succumbs to the fate of Daedalus and who to that of the unfortunate Icarus. Both men embark on further journeys as the novel closes, but their fate remains unknown. Will there be a third installment and resolution in this post-apocalyptic journey? Or is this simply the end of the world?