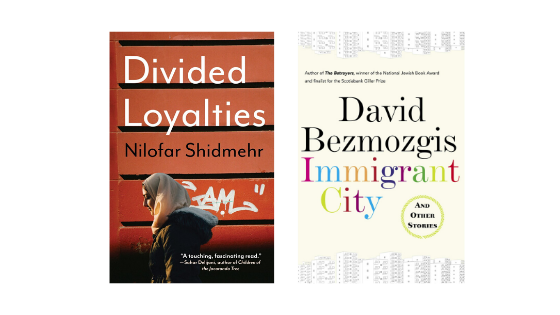 The short story, poised between poem and novel, demands of the writer a reconciliation between breadth and focus. The writer must provide just enough plot and action to create a narrative, while leaving the right kinds of gaps to suggest wider resonance and deeper meaning. Reading these two collections, Nilofar Shidmehr’s Divided Loyalties and David Bezmozgis’ Immigrant City, each written by and about first- and second-generation Canadian immigrants, I’m struck by how powerfully form and content speak to each other. The tensions intrinsic to the story form create suitably compressed and pressurized fictional containers in which to explore conflicted identity, the push-pull of immigrant experience and the sheer impossibility of looking forward while watching your back.

The subject of Shidmehr ‘s debut collection is Iranian women, from 1978, just before the revolution, through the Iran-Iraq war and its aftermath and as immigrants to Canada. Ordered chronologically, these stories plunge the reader into a complex, pulsing world of seething city streets, crowded buses, villages and towns. They follow their female protagonists back and forth between one place and another, observe them as they are torn by competing impulses and the impossible, contradictory demands of self and society, heart versus head: mothers, daughters, sisters and wives tangled in tightening webs of obligation and dependence, desire and loyalty, trying to find holes to slip through.

And they do slip through.  These women are active agents, gathering their bodies about them, moving like dots on a map, concentrated nodes of will and conviction. Surrounded by fault lines of gender, class and race, Shidmehr’s protagonists are constantly in motion, seeking moments of respite or riding currents of resistance.

In the powerful first story, ‘Sakeen,‘ pre-pubescent girls in pre-revolutionary Iran play Cinderella with Sakeen, the menstruating housemaid, who pushes her role to the very boundary of acceptability (and beyond) by demanding that ‘Cinderella’ launder her panties. In ‘Butterflies on the Bus,’ set during the Iran-Iraq war, Parvaaneh smuggles her brother Navid to the river Aras, from where he can escape Iran and military conscription, but ends up having to bribe a suspicious police sergeant by becoming his sigheh, or temporary wife, a decision which may effectively consign her to a life of prostitution.

Shidmehr’s sentences are complex and packed with information, at once crystal clear and highly nuanced, metaphoric and ruthlessly specific, held together by powerfully resonant central images that reverberate retroactively and knit together many levels of reference and meaning. Faced with the ‘helpful’ sergeant, who offers her money, Parvaaneh ‘stare[s] at the bundle for a brief moment, and yet the image before her eyes [is] that of Navid caught in the foamy water.’ Later, on the bus, she sees her own reflection in the window: ‘Her heart has finally answered. It has shown Parvaaneh her own face as a confirmation: like her, Navid is alive.’

These are stories of ordinary lives, starkly rendered and held in tender suspension, often between a ‘home’ which is beloved yet toxic, and an ‘away’ that is lonely and insulting in its oppressiveness. Panoramic yet intimate, they enact a kind of investigative surgery, each one plunging beneath the surface of a situation and penetrating it to the cellular level before re-emerging only a few minutes or hours later to reveal the context surrounding what has come to pass–usually a secret epiphany of some sort. Internal shifts stand in for wider transformations; they are also provisional. Balances of power can change in an instant. In ‘Saving the Dead,’ Maryam (known in Canada as Mary) returns to her hometown of Bam after the catastrophic earthquake and attempts to comfort an older man who has found his daughter’s body in the rubble, only to have him turn on her when a young man’s naked body surfaces, too, right beside it, and his grief is replaced by rage.

In a novel, if we followed one of these women over 300 pages, the narrative arc would demand some form of linear cause and effect, ordering the events of a life into a potentially misleading whole. In story form, these lives remain dynamic and unfinished, one thread pulled through to illuminate the rest. No integration is possible, or even desirable, Shidmehr seems to tell us, only a single moment of transformative witness.

How many times can a writer mine the same experience? The stories in Bezmozgis’ second collection, Immigrant City, revolve around the dislocation of male, Latvian immigrants to North America, perhaps not surprisingly, given that Bezmozgis fits this description too. Yet what emerges is the opposite of repetitive: a rich, varied and playful exploration of the distinctive magnetic poles of a particular identity—Latvian, Jewish, immigrant, intellectual, male, successful—including cautionary tales that testify how one identity can all too easily slip into or be replaced by another.

Two of the stories concern members of the same family; three of the protagonists appear so similar to Bezmozgis that their stories read like autofiction; several others might be alter-egos: men from similar backgrounds whose lives have taken drastically different turns. What the stories all share is a preternaturally powerful and convincing narrative voice. There is a solidity, a factuality to the telling, a deceptive directness, which feels almost indistinguishable from journalism. In short, reading these stories can feel like remembering them, even if you aren’t male or Latvian.

Other kinds of writerly trickery are at work—exquisite plotting, for example, the manufacture of just the right challenges and coincidences to crack each character open, in a way that feels both inevitable and utterly surprising. In the title story, a comfortable urban professional takes his young daughter to the sketchy side of town in search of a cheap replacement car door, and has trouble peeling her away from her newfound family. Although he reassures himself, ‘In an immigrant city…a white man with a car door and a daughter wearing a blue hijab attract less attention than you might expect,’ something restless has been set in motion. ‘Nora, it’s our stop,’ I said. ‘Do you want to go home or keep going?’ ‘Go home and keep going,’ she said.’

In a North American immigrant city, the dream (fantasy?) of starting over is always present. As immigrants, we yearn to be accepted, yet also desire to control what is known, or thought, about us, to choose which stories follow us from the old country. In fiction-writing, this technique is referred to as the ‘rate of revelation,’ and Bezmozgis works this tension to great effect. Control over who knows what can be a very serious matter, as the narrator of ‘Little Rooster’ suggests: ‘One of life’s cruellest lessons is that a person can’t unknow something.’ And these stories also contain depth charges through which deep unease is transferred to the reader. Sooner or later, the confident voice of each story’s narrator breaks open, and a vertiginous realm of unresolved historical trauma is revealed. Inevitably, this opening out is extremely brief and tightly controlled, yet part of the satisfaction of reading this collection is reveling in just how much control Bezmozgis has over his material, even as it skirts utter chaos. In the complex yet knockabout final story, ‘The Russian Riviera,’ Kostya, from Siberia, has escaped poverty through becoming a successful boxer and emigrated to Toronto, where he works in the eponymous night club, yet still he is fighting off the same old Russian gangsters. Coming round in the men’s washroom after Kostya has knocked him out, a lone gangster and Kostya commiserate with each other. They’re on opposite sides, but neither has discovered an escape route from the ‘Russian Riviera.’

Who are we? What do we want? In this collection Bezmozgis artfully suggests that the stories we get caught up in, as protagonists, are not quite as linear as they appear. Underneath, we are all re-enacting unfinished narratives passed down to us by our parents, our ancestors; in a sense, living in both past and present simultaneously. For recent immigrants, these narratives may be particularly pressing; and when you’re stuck in a short story, there’s only so far you can run.