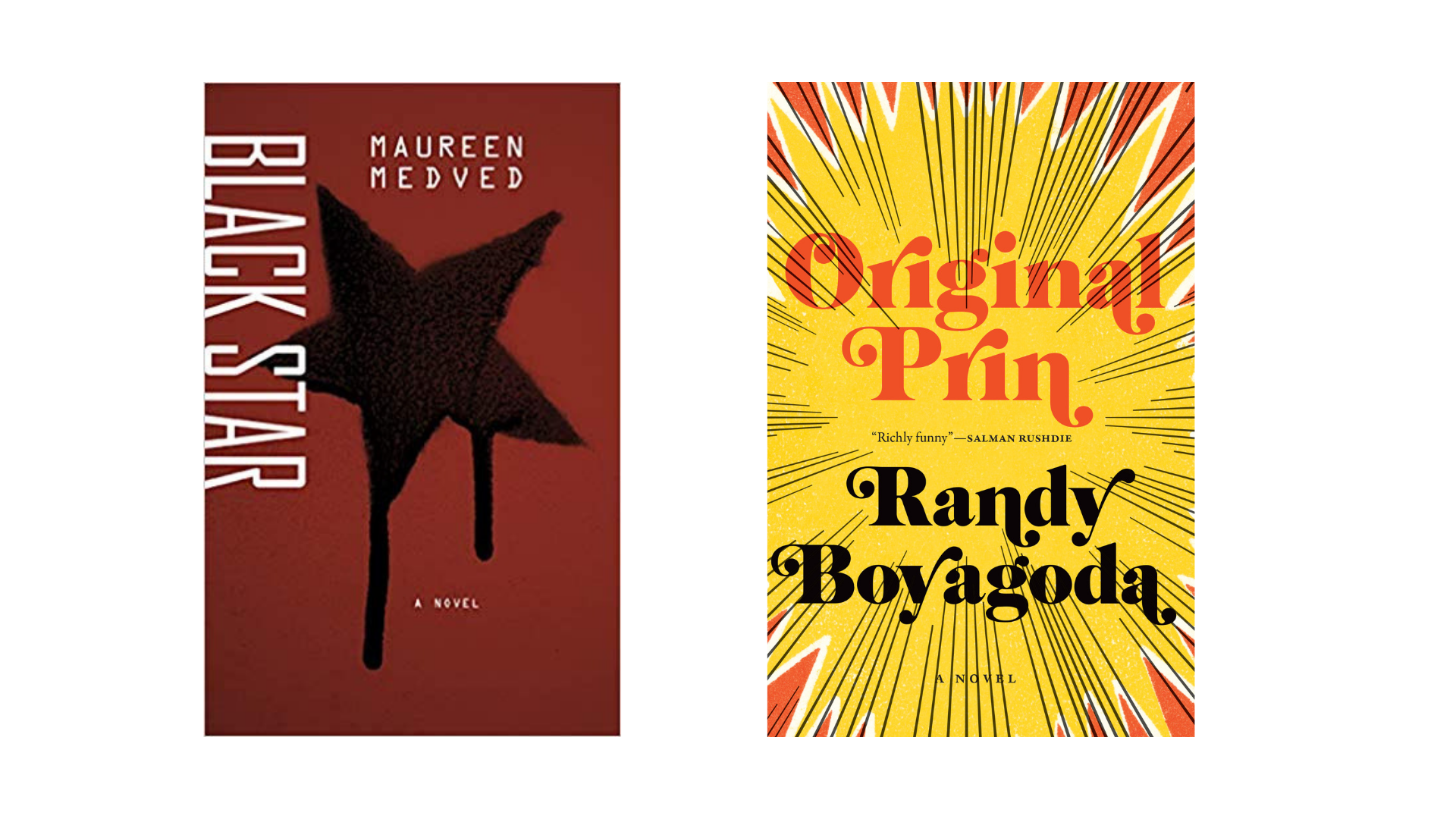 Although American Mary McCarthy’s The Groves of Academe  (1952) is widely credited as the first novel in English set in academia, Canada lays claim to an earlier novel that sends up academic pretentions. Paul Hiebert’s pseudo-biography, Sarah Binks (1947), a sustained critique of Canadian academia (and our politics and culture generally) reputedly born of his experiences at the University of Manitoba, has remained in print since its original publication.

Perhaps it is not coincidence that both pioneer works are satires like many subsequent classic campus novels, such as Robertson Davies’ jab at the University of Toronto, Rebel Angels (1982), David Lodge’s Campus Trilogy (1975 to 1988) and A.S. Byatt’s Possession (1990). When one must publish or perish, tempests in teacups abound, and much ado about nothing is the status quo, what other approach suggests itself as readily?

Maureen Medved’s Black Star and Randy Boyagoda’s Original Prin illustrate the sweep of satire—from trenchant critique to belly laugh.  Both capture multiple shades of the contemporary academic world—as ever, ranging from affectation and absurdity to gravity and the cutthroat, but intensified by the neoliberal and social media age.  They also evince the serious purpose of satire. Satirists are often moralists.

The first words of Medved’s second novel, ‘Everything was perfect until Helene LeBec infected our university,’ set up the diseased atmosphere that permeates the plot; however, the ensuing contest is more complicated than ‘her-versus-her.’ Forty-year-old Delarosa (Del) Hanks, the unbalanced first-person narrator/protagonist, has long battled a sinister system and, significantly, inner demons. Like too many contemporary academics, she is precariously perched—completing that second book (on philosophy of mind) that ensures tenure eludes her. With a massive chip on her shoulder due to a wrong-side-of-the-tracks childhood with a censorious mother and a manipulative past relationship with an academic mentor, Del is at once an incisive, amusing, shaky and unconvincing guide through the contaminated campus environment.

The trendy young LeBec may be just a convenient whipping board for Del, but she is an important vehicle for Medved’s satire. Through Del’s eyes, LeBec embodies a fickle, shallow system. Equipped with daring outfits, a specialty in virtue ethics related to animals, and an impressive command of social media, she works the department by endearing herself to the powerful, creating a contingent of junior followers, causing the dismissal of colleagues, and even turning Tanis, Del’s co-worker and only reputed friend, against her.

Much of Black Star converges on the darker ranges of satire. Del’s unresolved past, complicated present and uncertain future collide as the plot descends into a surrealistic nightmare. Del’s classroom in the basement of an abandoned building connected to the philosophy department by a tunnel not only symbolizes her marginalized status, it is also the endpoint of a journey where she repeatedly encounters a shadowy young homeless boy who could initially be taken as a figment of her imagination. Yet, after Del ‘slums it’ in a bar, their relationship becomes all too real—a magnified echo of her relationship with her supervisor. She perpetuates the cycle of abuse and, in doing so, damages not only the boy but also herself and others. At times, it is hard to know how to take this novel, never more than when Del visits Tanis, apparently on her deathbed in a hospital. Although Tanis is emaciated and barely able to speak, Del focuses on her own woes. Will she lose her job? What has Tanis told Helene about Del’s past? These concerns take precedence over Tanis’s precarious health. In short, Del Hanks, a philosopher of decision theory, plays out the ending of her second book, The Catastrophic Decision, and it is far from happy.

Although I might have wanted Black Star a little less dark, and I was unduly frustrated attempting to impose a real-life counterpart on the vague city where Del teaches, Medved deserves credit for an unflinching portrait of the effects of diseased systems on vulnerable individuals—and the perpetuation of that toxicity.  Satires rarely cut to the human core as deeply as this novel does.

Boyagoda’s first line takes the prize for a gripping hook: ‘Eight months before he became a suicide bomber, Prin went to the zoo with his family.’ This sentence neatly sets up the permeability of the lines between the public and private worlds that informs the plot. Protagonist Prin, the meek, hapless Roman Catholic husband and father of four, is confronting personal change at an alarming rate: after surviving an operation for prostate cancer that may leave him impotent, Prin learns that the faith-based Toronto university where he is an associate professor of English (originally University of the Family Universal, but dumbed-down to UFU) may close for financial reasons. While working—along with his ex-girlfriend Wende—to save UFU, he must also tend to his aging parents and his research on the seahorse in Can Lit. Meanwhile, climate change and precarious global politics cannot be ignored. Boyagoda leaves few contemporary stones unturned.

The UFU survival options deftly capture the corporatization of the 21st century university. Proposal A: Partner with a Chinese company that builds seniors complexes, turn a campus building into an elder care facility and focus on teaching this affluent demographic. Proposal B: Work with an official in the fictitious Dragomans government to start an international partnership whereby UFU faculty teach Dragomans students online, supplemented with monthly face-to-face lectures when the country is stable enough. Despite his wife Molly’s misgivings, Prin wants to scout out Dragomans and deliver a lecture and seminar on (appropriately) Kafka—motivated by survival instinct, Divine Intervention and his libido (the flame for Wende may not be completely extinguished).

First, though, the plot detours to the United States, where the family stays with Molly’s relatives. Boyagoda sends up the superpower for all it is worth, culminating when Prin, his American nephews in tow, experiences a trauma in a massive Milwaukee mall on the fourth of July: a right-wing radio talk show host is holding court with his guest of honour, a veteran of the wars in Iraq and Afghanistan, when two men open fire on the fawning crowd. Although only minor injuries are sustained, Molly sees the encounter as a portent; Prin sees it as propitious. Molly proves right.

Theorists of comedy like Henri Bergson see incongruity as its heart, and Prin’s time in Dragomans is a case in point. Arriving at the high security complex that he would call home for his three-day stay in Dragomans, Prin is ushered by Wende into the lecture hall, populated by government officials, civil servants and students. After his two-hour talk, only the official note taker is still awake. That Prin is a bit player/dupe in a larger drama only dawns on him when Wende reveals that the powers-that-be have reached an agreement that combines Options A and B: Dragomans students will study theory in their home country and complete practical internships working with seniors in Toronto. In the earnest seminar Prin then delivers to the Dragoman students, his attempts to link his seahorse research and Kafka’s Metamorphosis to eldercare are futile: the students are interested only in how much care of old people will be required before they get credentialed, take real jobs and bring their families to Canada.

In Prin’s argument with Wende that ensues, the two confront their past relationship and examine their respective faiths. The discussion rids Prin of any romantic feelings toward her, but not of guilt about an earlier embrace. Informed that he and Wende were photographed in this compromising position, Prin allows himself to be intimidated into signing documents that cement the newly modified UFU- Dragomans agreement. The gap between the loftier of Prin’s motives and the realities of the neo-liberal university makes for first-rate satire as economic expedience wins the day.

Determined to salvage a measure of moral redemption from an otherwise disappointing trip, Prin hatches a plan to do penance for his guilt over the embrace with Wende. He makes a pilgrimage en route to the airport for the trip home. Noble intentions come to little, however, at the Church of the Holy Seat, a gaudy tourist trap, when Prin, unable to bring himself to perform the requisite act of kissing the seat, can only pray for the courage to never again flee God.

That courage is soon tested. In a larger reverberation of the Milwaukee mall incident, at the airport duty free shop, Prin witnesses another shooting. Through a series of mishaps, he is mistaken for an ally, a fighter for the khilafah, by one of the gunmen and readily assumes the role. However, when he realizes that the shootings have hit close to home, Prin finally gets brave, and the end of the first novel in a planned trilogy leaves the reader—and Prin—dangling. We can only hope that books two and three are as incisive in their exploration of the vagaries of Canadian academic life in the global university world as is Original Prin.

Ginny Ratsoy teaches in the Department of English and Modern Languages and is Director of the Centre for the Study of Canada at Thompson Rivers University. In addition to co-editing, with James Hoffman, Playing the Pacific Province: An Anthology of British Columbia Plays, 1967â??2000 (Playwrights Canada Press), she has co-edited, with Henry Hubert, Anne Gagnon, Terry Kading, and Martin Whittles, the Canadian Studies issue of Textual Studies in Canada. She has also published book and journal articles on literature in the small city and drama publishing.