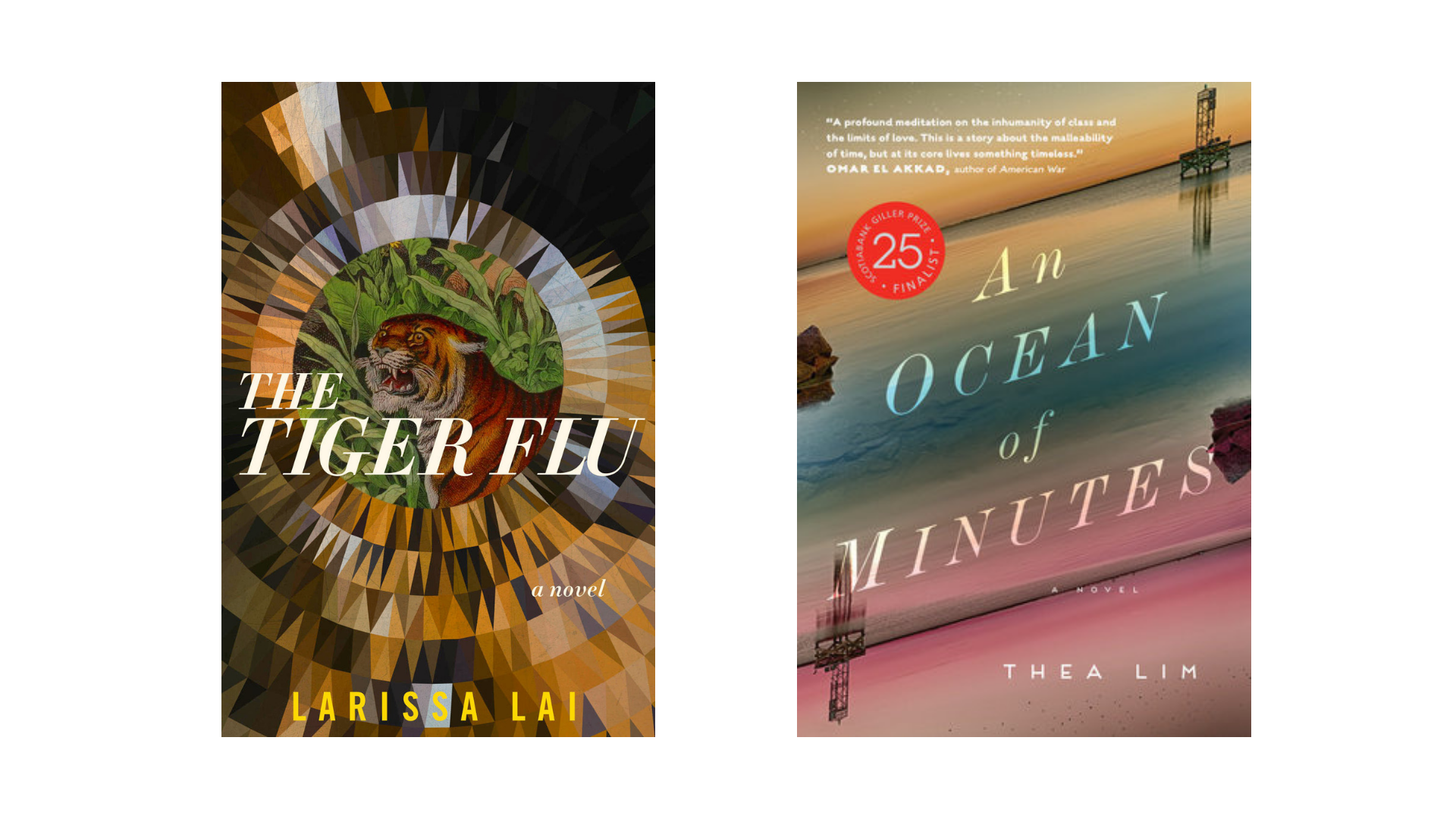 The first few pages of Larissa Lai’s The Tiger Flu contain a list of 34 characters; an epigraph with three quotations, one from poet William Blake, one from feminist theorist Monique Wittig, and one ascribed to the Yellow Emperor from the Daoist text The Yin Fu Ching; and the date, expressed through three calendars:

These pages reflect the spirit of the novel as a whole. Lai has created a rich world of contested space, competing narratives and shifting allegiances. The book is allusive, gesturing to ancient religious texts, Indigenous storytelling traditions and culture, and current pop culture. It’s about ecological collapse and adaptation: oil is no more, acid rain burns holes in clothing and tears through skin, tropical plants now thrive in what was once Canada. It’s also about wealth inequality and corporate statehood, taking the idea of CEOs as modern-day heroes/arch-villains to its logical end. In this world, the technological and natural are permeable categories. Characters plug memory scales into their heads, create ‘womb bombs,’ bioengineered traps made from ‘black squirrel bladder cells,’ and the satellites Chang and Eng orbit in the sky, eclipsing the sun and moon as Earth’s visual reference points.

As for the story itself, where to begin? The Caspian Tiger Flu, which predominantly affects men, has decimated the population. Isabelle Chow, the CEO of HöST Light Industries, rules wealthy, walled-in Saltwater City with its glass towers. Just outside lie the Saltwater Flats in the first quarantine ring, a living ruin where people fight for survival. In what was Vancouver’s old Woodward’s Building, 15-year-old Kora Ko lives with her ailing family. A few blocks away is the Cordova Dancing School for Girls, home to a band of tough, street-smart foragers, their eyes rimmed with kohl and hair crawling with lice. There’s the sovereign Coast Salish Timeplace, the second and third quarantine rings, and in the fourth quarantine ring Grist Village, founded by an escaped factory worker clone. Among the Grist sisters, who reproduce themselves, is Kirilow Groundsel, Kora’s narrative counterpart. The two eventually meet, an odd couple tasked with understanding their complicated pasts and surviving the nefarious schemes of the powerful.

This world is exciting. Lai’s writing is imaginative, full of verve and verbal play, and she uses the third-person omniscient and first-person perspectives to great effect. However, it’s also an overwhelming experience; with so many geopolitical twists and turns it can be hard to keep up. And it was difficult to picture some of the more fantastical features of this world, despite plenty of vivid description. In fact, the last third of the book takes such wild leaps that it felt like a different work than the earlier sections: an already deeply unfamiliar sci-fi world descends into a kind of amped-up delirium. So, yes, the plot does get fuzzy, but I didn’t particularly mind. Part of the pleasure of The Tiger Flu is thinking through its ambiguities and connotations. The world Lai has created feels immense—I could imagine it reaching far beyond the scope of the novel, far past the four quarantine rings. The novel nearly vibrates with ideas, and its centering of Asian, Indigenous and queer voices (among others) is refreshing and necessary.

If the experience of reading Lai can feel flu-like—intense, dizzying—Thea Lim’s An Ocean of Minutes employs the flu less as an overarching aesthetic sensibility than as an effective plot device. ‘People wishing to time travel go to Houston Intercontinental Airport,’ it begins. Polly Nader, therefore, heads to Houston. In the wake of a devastating pandemic, she has signed up for time travel (and, written in the contract’s small print, its associated conditions) in exchange for a vaccine to save the life of her fiancé, Frank. She has placed her trust in the TimeRaiser company, received a work visa, and made a promise with Frank to meet up in the future, in September 1993. If something goes wrong, they assure one another, they’ll visit the Flagship Hotel in Galveston, Texas, every Saturday in September until they’re reunited. Almost immediately, something goes wrong: Polly is redirected to September 1998, seventeen years after her 1981 departure.

In 1998 Polly’s misfortunes continue. Indentured to TimeRaiser, she has become one of many low-paid labourers rebuilding a devastated land, piece by piece. She struggles to catch up with recent history and, once she does, struggles to believe its truth: the flu killed so many and spread so quickly that it effectively halved the country: the North is now the United States, while the South, where she finds herself, is America. As for Polly, she’s stateless, forced to work off her debt to TimeRaiser and find her bearings in a corporate dystopia. Lim’s alternative vision of 1998 is convincing: in response to the pandemic, America has become fixated on wellness, remaking itself into a vacationland for wealthy foreigners, who receive young-blood transfusions and lounge by swimming pools. Here, wellness is synonymous with a distrust of technology: low-skilled time traveler workers populate the tourist town of Galveston, driving rickshaws, creating electrical power through stationary bicycles and making decorative tiles for fancy vacation homes by hand. Here is also a place that understands how best to capitalize on nostalgia, with workers actively attempting to recreate the most famous and luxurious hotels and landmarks of the old pre-flu world. ‘We’re getting the past back, but better. It will be the way we like to remember it, instead of the way it was. People will pay anything for that,’ Polly’s boss tells her.

And yet this new iteration of the past isn’t much improved. Racial and classist hierarchies persist, as America embraces what it still has after experiencing so much loss: a ‘time machine, a stream of cheap and willing workers spewing forth.’ As Polly desperately searches for Frank and her beloved aunt, Donna, she finds herself continuously hindered by the strictures of bureaucracy, the immigration system and the near-hegemonic world of the TimeRaiser corporation, where every comfort comes at a cost. In these ways the novel feels incredibly current, reflecting features of today’s social, economic and political landscape: the embrace of the artisanal, which so often erases the labour of marginalized subjects; resource scarcity; the fraught relationship to borders, immigrants, the ‘other’; the obsession with self-care; corporate dominance; the increasing monetization of…well, everything. Could these have been the anxieties and preoccupations of 1998? Possibly. It feels hard to imagine a world in which we’re no longer bombarded by the narrative that tech will save us (from climate change, from ourselves), but who knows? A death-dealing pandemic might have shifted things considerably.

Beyond deftly capturing the humiliations of existing in such a world—as the reader, I felt every moment of Polly’s trials in America on an uncomfortably physical level—Lim is even more effective at conveying Polly’s abiding love for Frank. The novel switches back and forth between the present and the past, when Polly and Frank are together and 1998 is still a distant, unknowable place in time. We watch as their relationship develops, as their ties to one another deepen. Reading these chapters, I unwittingly envisioned each scene backlit, each tender moment seemingly illuminated. Some might see these scenes as overly sentimental, but I saw them as a commentary on memory and the necessity of narrative in our lives. What do we choose to remember and how do we remember it?

After finishing An Ocean of Minutes, I looked at my surroundings with surprise, as if I’d been on a long journey and had finally come home. Lim’s novel, for me, offered a bracing clarity, the ability to see what’s important, what’s at stake. In The Tiger Flu, Kora and Kirilow are also haunted by loss, and this part of the novel grounds the often complicated quest narrative and provides its purpose. Perhaps, these novels suggest, we don’t need the unbelievable to rip us from our moorings: even without a flu, life itself is deeply uncertain, and the big events—the fight for love, the flight from death, the unbearable reckoning with loss—happen anyway.

Marisa Grizenko holds an MA from UBC and is a writing consultant, editor, and enthusiastic reader living in Vancouver.