On the Radar: Where I Fall, Where She Rises by Dean Serravalle 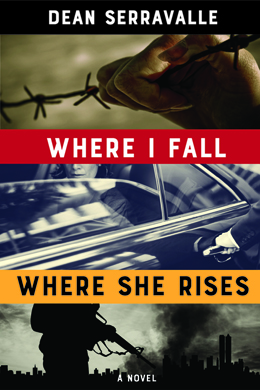 Dean Serravalle is the author of four novels, Reliving Charley (Oberon Press), Chameleon Days (Now or Never Press), Lock 7 (8th House Publishing), and his latest, Where I Fall, Where She Rises (Inanna Publications). An English professor, Program Chair of English and Freelance Journalist, Dean received his M.A. from the University of Windsor, where he apprenticed under renowned poet Di Brandt and the late great literary author, Alistair Macleod.  He has published over 30 stories internationally, garnering nominations for the prestigious National Magazine Award and the Journey Prize in Canada.  He currently resides in Niagara Falls, Ontario with his family.

Where I Fall, Where She Rises is a novel that follows two women on opposite ends of a terrorist kidnapping. While one woman suffers and falls at the hands of her captors, the other exploits the fame of such a publicized event to secure a future for her unborn child. Lea Ironstone is a Canadian freelance journalist who recalls her time spent in the very dangerous red zone of Baghdad, after the 2003 U.S. invasion. A self-destructive addict, she refuses to relegate herself to the safer green zone, where most mainstream news journalists like Paul Shell are protected. Desperately seeking a more controversial story to re-establish his fame as a television journalist for GNN, Paul Shell contacts Lea and agrees to meet her in the red zone for a recent finding. They are kidnapped by an insurgent terrorist sect and tortured repeatedly. Carol Shell, Paul Shell’s wife, lives in New York. Eight months pregnant, Carol is approached by Timothy Abel, her husband’s agent. Timothy wishes to represent her “victimhood,” which he sees as a very marketable and exploitable asset. Her appetite for fame and celebrity eclipses her familial priorities and she is coerced into a lifestyle that hinges on personal promotion. Lea and Paul find themselves incarcerated in a basement dungeon expecting their next “artistic” torture, while Carol makes her next public appearance to further her star. Lea and Paul’s relationship evolves into a mutual understanding of their united fate, while Carol, on the other side of the world, rises in public stature. The novel evolves into an emotional satire, which depicts two strong women who attack the consequences of war on two different fronts.

“A difficult journey exploring both the struggle of survival and what it means to be alive.”

Where I Fall, Where She Rises deals with a very delicate topic. What was the most challenging aspect of writing this book?

The most challenging aspect of writing this book was to get the satire working with the sympathetic characters in the novel. I wanted my characters to breathe realistic in the novel within the culture and context of this satire. I believe, in the end, it created an emotional satire of sorts, and I was very pleased with this fusion.

What inspired you to write the stories of Lea and Carol?

I was an avid reader of mystical narratives, so I wanted my characters to transcend their own difficult sufferings in whatever imaginable way possible. In my research, I came across so many war blogs and narratives, mostly from journalists.  The level of risk and devotion required to capture such dangerous stories was admirable and fascinated me. At the same time, I was similarly entranced by characters like Carol, who find manipulative ways to exploit the truth of such tragedies. So, I suppose the characters became the manifestations of my fascination with the hypocrisies of war.

Did you decide to include “The Marriage of Heaven and Hell” before starting to write, or was it something that you realized could be included in the book mid-way through the writing process?

Yes. “The Marriage of Heaven and Hell” was the poetic driving force of this novel from the very beginning. It allowed me to synchronize the hypocrisies of war I so desperately wanted to explore in the narrative. The language itself in the poem became the heart and soul of my characters, actually; all of them. Also, it was always one of my favourite poems of study in university.

Out of all the characters in the book, which one do you think will surprise your readers the most?

Ironically, I think Carol’s agent, Timothy Abel, will surprise many readers because he is so ruthlessly efficient as her satanic-like representative. He orchestrates profitable mischief for Carol and practically stages her celebrity for eventual, and more profitable, destruction. At the same time, his confidence is magnetic.

How was the process of writing a novel that is told by two different women?

Because they are nearly polar opposites, I found it a pleasure to jump in and out of their characters. I enjoyed speaking to them as well as representing their voices. I believe you have to spend as much time listening to your characters as you do creating what they want to say. They are fascinating women, so for me, it was hard not to admire them while I fleshed them out on the page with words. They commanded my attention with what they stood for, while their flaws were so tragic-heroic to me. So, the process, I suppose, began with the upmost respect for who they are and what they stand for.

Dean Seravalle’s new novel is out now. Visit his website for more info.