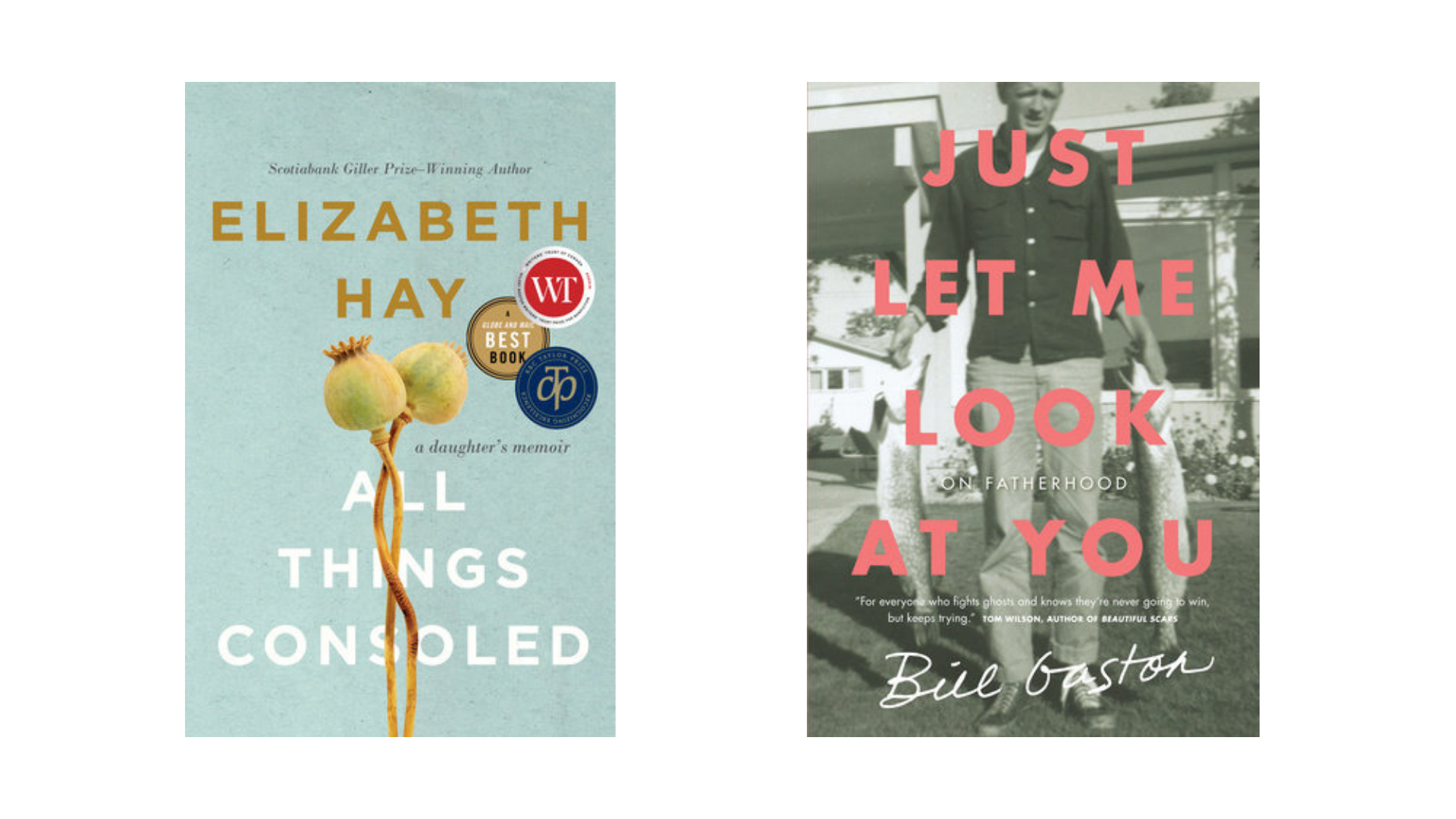 Bill Gaston, Just Let Me Look at You: On Fatherhood, Hamish Hamilton, 2018

Who among us hasn’t been struck, somewhere along our path to adulthood, by the sudden revelation that a parent is a complex individual with a life separate from us—including a childhood we didn’t share and, possibly, wounds and aspirations we know nothing about? How fully do we ever know these people?

In All Things Consoled: A Daughter’s Memoir, Elizabeth Hay examines her relationships with both parents as she recounts their final years when she became essential to their daily care. Rummaging through old family stories and wrestling with new insights, she exposes and confronts her limited understanding of her difficult father, Gordon, in particular, and her evolving grasp on the strength and character of her parents’ long marriage.

The dominant arc in All Things Consoled stretches across the last three and a half years, 2008-2012, of the life of Jean Hay, the author’s mother, bisected by her father’s death in 2010. Our attention is not drawn to the six years between Jean’s death and the memoir’s publication; rather, Hay writes from within this ‘present,’ a time of burden, love, boredom and strife. Disrupting the downward linear trajectory of the framing story are Hay’s recollections of the distant and more recent past, interspersed in ways that feel both impressionistic and somehow urgent. Memories erupt into the foreground with pressing energy—as if someone were rootling through a closet full of them, yanking out every fourth or fifth item to consider it, briefly, by daylight. Some recollections are tender and intimate, such as the description of Elizabeth washing the elderly Jean’s hair weekly at the kitchen sink; others bitter, steeped in a child’s outrage at injustice, as when she recounts her disciplinarian father speaking to her in a tone of ‘withering disgust’ just before he ‘walloped’ her for having snuck candy, against his prohibition, when she was a young girl.

The story is full of struggle. Cruel, sometimes violent, Gord withholds praise, seemingly incapable of the easy affection his daughter craves—an affection never in doubt between Hay and her mother. A painter with a quick, wry wit, Jean is creative, like Elizabeth. She is less mercurial than Gord, apparently at peace with her secondary role in the home: ‘Someone sets the tone in a house,’ she shrugs. Hay, initially critical of both parents, is haunted by her need for something from each of them. From Gord: recognition, perhaps tenderness, toward both wife and daughter. From Jean: the answer to the question, ‘When did you first see Dad lose his temper?’ beneath which lurks the implicit accusation, Why didn’t you protect me?

As Hay becomes enmeshed in their lives, her perspective begins to change. She reflects, ‘The more I write, the more benign my parents seem.’ She re-interprets Jean’s seeming deference to Gord as strength, appreciating ‘for the first time the counterweight she consciously tried to provide to my father’s irascible gloom.’ Competitive Elizabeth learns about herself, too. She seems less haunted by her need for vindication. She opens herself more with Gord. Although they still ‘sparred regularly,’ they become ‘closer to each other…partly because I let up and extended myself toward him.’ And she gains new respect for her parents’ marriage—as inscrutable as it is—marveling at ‘how woven into each other, body and soul, the two of them were.’

Yet this is not an air-brushed tale in which harmony descends before death comes. Nowhere is struggle so evident as in the scene of Gord’s dying. In crisp, clear prose, Hay captures the agitation, the hard work of dying. Anyone who has sat with a loved one as life battles its own end, as the body shuts down, will recognize the accuracy—paradoxically, the vitality—here. And Hay finds her father ‘outrageously self-centred’ to the end. By contrast, her mother’s subsequent death is peaceful—if far too late arriving, by Jean’s own reckoning. The struggle for Hay herself, the daughter in this Daughter’s Memoir, does not strike me as settled conveniently by the time the book concludes. From the centre of the action, she has taken stock of her parents and of herself, and she’s rendered portraits not entirely charitable or generous. But they feel full of honest observation. And a certain rawness. Written with the intensity of a storm that is still passing.

Bill Gaston’s memoir Just Let Me Look at You: On Fatherhood focuses primarily on the writer’s father, Bob, a chronic alcoholic, and on their relationship. After Bob’s death, Gaston learned devastating truths about the man’s own childhood; in light of these late revelations, the son re-examined everything he believed he knew about the father. One result is this book. With a voice rich with humility and integrity, the work opens with Gaston acknowledging that to tell his own story inevitably means exposing his father. There is something unfair about splaying wide the character of someone else, someone unable to put his own account on record. To reassure us on this point, Gaston offers a disclaimer: ‘I don’t claim that I could have lived his life better than he did.’ In this way, he announces that this will be a journey not towards judgement but towards understanding.

The narrative present is a tight, three-day framing story. Gaston is piloting Sylvan, his 26’ boat of questionable soundness, on a journey north from Vancouver along BC’s Sunshine Coast. His is a solitary pilgrimage to the village of Egmont, where he and his father often fished together in earlier years. Along the way, he intends to confront nature, his memory, his understanding of his father and his own limitations—as a son and, now, as a father himself. The reader may periodically forget that Gaston is alone. Beyond introspection and memory, his companions include the voice of the radio weather-reader, whom he dubs ‘Audrey,’ a parade of creatures—including an eagle and two herons who open the book with an arresting sky-battle—the quirky Sylvan and the rugged, variable coastal seascape.

The mood is contemplative. Like a fisher accustomed to catch-and-release, Gaston seemingly surrenders to each image or memory that drifts into view—welcoming, touching each one, then watching it recede. In this sense the book unfolds like the practised meditation of a disciplined mind, the play of narratives easeful, unforced. Gaston’s focus floats from broken engine part to childhood memory of his father’s mechanical ineptness to a change in the present weather. Without need for overt comparisons, the interweaving tales highlight both strong similarities and stark contrasts between the two men: Gaston, writer, family man who craves solitude, adult son re-assessing his earlier self’s view of the father he never fully knew; Bob, loving but uncommunicative father, craving family yet abandoning them over and over for the oblivion of the bottle.

Despite the sense that we are awash in unhurried reflection, the story sustains its forward motion. There is a mystery at its heart. Recalling one of the few tales his father shared about his own childhood—which turned out to be mostly untrue—Gaston writes, ‘I wonder why he didn’t tell me what really happened. The bad stuff…. It would have changed everything.’ He exercises remarkable narrative control, holding both the meat of the revelations and the revisionist import of them at bay through most of his work. Periodically, he teases out the line, just a little, reminding us that there is a larger, darker core to the story, as when he notes, in the context of tales of his father during Gaston’s teenage years, ‘I didn’t understand why my father was a liar.’ He soon adds, ‘I didn’t know…what had hurt…and…shaped him, before the alcohol.’ Such quick flashes, like colourful lures, flicker occasionally across the page, then are gone.

Gaston wrestles for three days with shadows. He owns up to many shortcomings, consistent with his opening humility and reluctance to judge. These range in gravity—from calling himself a ‘wind chicken’ at sea to admitting with evident shame that he once drove his young son home from a party while very stoned, a transgression he believes lost him that son’s trust. And he examines his own flirtation with alcohol dependence. These disclosures put Gaston, to some degree, in the tradition of the wounded healer—his evident compassion for his father, even before we know the nature of his father’s suffering, made all the more powerful for being anchored in the storyteller’s candid self-assessment.

Tension builds as Gaston, ambivalent, defers his arrival in Egmont, ‘the cemetery of my father,’ a place with ‘darkness’ in its ‘heart.’ (Resist the temptation to think Heart of Darkness—this work is more complex and humane.) To resolve this tension requires Gaston to turn his gaze, finally, on his father’s whole story (just let me look at you…). In the final chapters he weaves the three strands of narrative—the present (trip to Egmont), relatively recent past (Bob’s death) and distant past (Bob’s childhood)—into an interdependent conclusion that had tears spilling down my face. His insight into his father’s terror while dying is one of the most affecting scenes I’ve read in years, and will haunt me. This book is a beautiful, mature meditation on love, forgiveness and the gift of compassion.