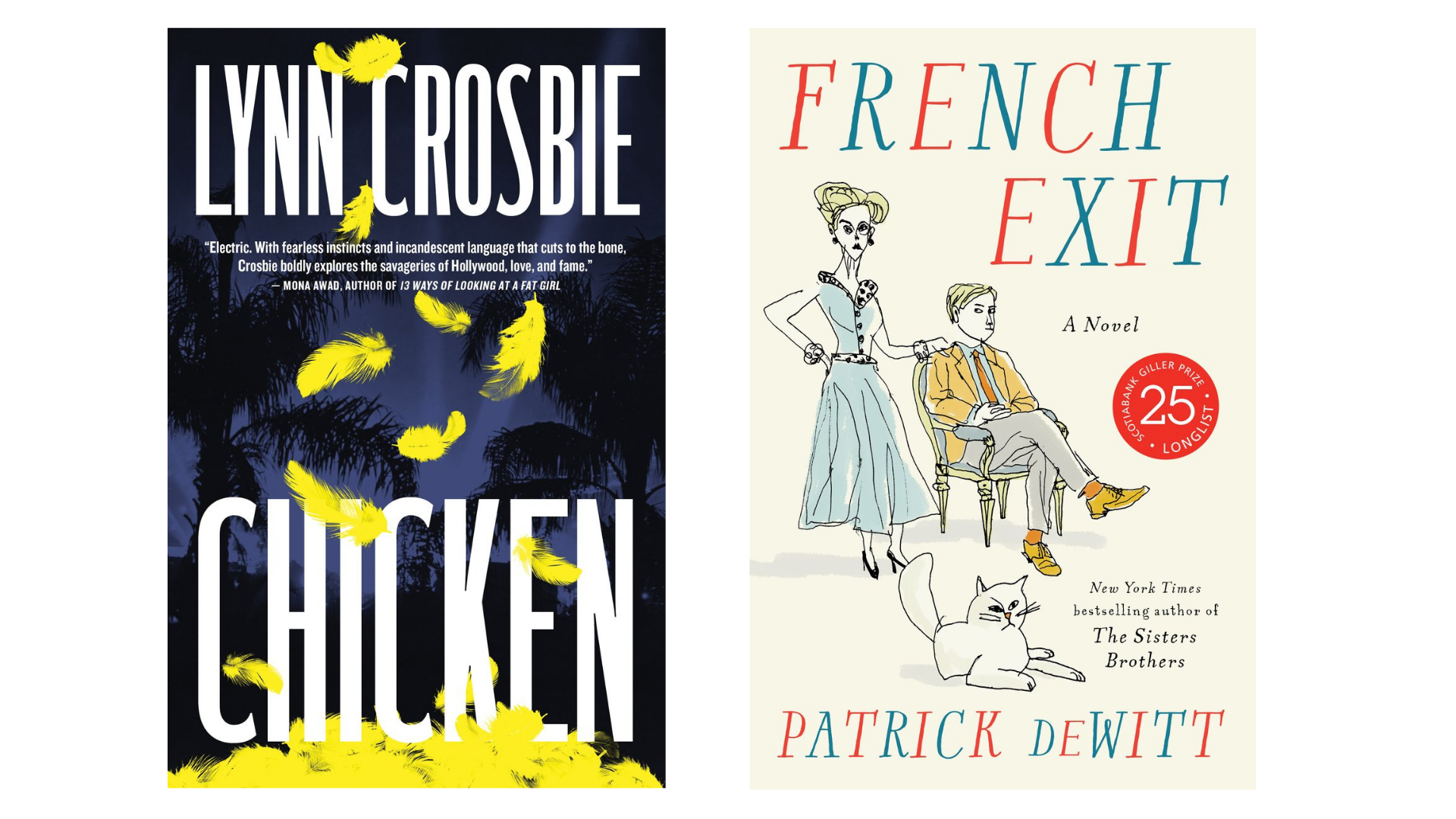 In case Oxford’s definition of ‘mannered’—‘(of behaviour, art, or a literary style) marked by idiosyncratic or exaggerated mannerisms; artificial’—suggests a word free of connotation, the dictionary’s subsequent usage example tells otherwise: ‘inane dialogue and mannered acting.’ Pairing ‘inane’ with ‘mannered’ evokes a preferable opposite: true-to-life dialogue and realistic acting are the superior, authentic modes. Evidently, mannered is second-rate, of questionable taste and value. As for ‘Why?’ or ‘Says who?’ the tome remains mum.

With Chicken, Lynn Crosbie remains dogged regarding an exploration that began with Paul’s Case and Dorothy L’Amour and continued with Life is About Losing Everything and Where Did You Sleep Last Night. That is, the opiate-like highs of love/sex/romance, the abysmal lows, and the myriad ways it all ends in ruin.

A kind of A Star is Reborn, the novel’s fantastic L.A.-set plot centres on love’s short-lived redemptive properties. Driving a car ‘syphilitic with rust,’ living off a ‘pension check and residuals (for an ancient Old Spice ad that occasionally airs in Peru)’ that allow for the ‘occasional shockingly vile prostitute,’ father of a sexual predator son and a ‘morbidly obese sugar addict’ daughter nicknamed Pudge, 67-year old Parnell Wilde introduces himself while dressed in a pillow case tank top, shredded Hulk pants and plastic sandals: ‘I am sixty-seven years old today. I am paunchy and balding; bloated, with crazed eyebrows and a nose that looks part radish, part road map. And I am, incidentally, losing my mind.’

Recounting his ‘monstrous life’—‘what happens when you fall from a great height and crash’—the flat broke actor’s narrative skitters in assorted directions, but mostly backwards and forwards. Rearward: discovery by sadistic director Lamont Kray and a starring role in the 1970s hit Ultraviolence. Earlier still: recollections of hustling in England and an abusive (then slain) mother. After a falling out with Kray, Wilde’s career sputters out with tequila, D-list roles and festering self-loathing.

When beautiful model, writer and filmmaker (with a doctorate at 21!) Annabel Wrath shows up at Wilde’s ‘outright dump in Koreatown,’ the smitten ‘fiend’ senses a green seedling ‘deep within the repulsive dirt and trash that occupy my heart.’ Before long, he’s wealthy, acclaimed, besotted and shooting a sequel to the film that lit his star.

Anyone familiar with Crosbie’s fiction will understand how ‘a love for the ages’ naturally degrades into luridness and tabloid headlines. Aside from drugs (cocaine, often; but huffing insecticide isn’t unheard of: ‘Some time later, I buy the biggest can of Raid I can afford and spray its delectable perfume everywhere, taking deep, delighted breaths’), there’s a veritable mille-feuille of excesses: poisonings, murders, assaults, lost weekends of sex and extravagant consumption (from caviar and champagne to ‘a hundred-storey green-glass building carpeted with plush dollar signs’ and a tiger cub named Sandy: Wilde takes him ‘for a walk on a jeweled leash in tight leatherette shorts and a diamond sun visor’).

Crosbie throws in galleries of grotesquerie (‘a bald fossil who speaks in a growl and weaves tapestries of the celestial birth and heraldic death of Princess Diana’; ‘a mystifying obese tatterdemalion with big blond surfer hair’) as well as her signature arcane vocabulary (leporine, aureate, viridescent, achondroplastic, chirality and even stygian ejaculate) to fill out an outlandish, funhouse rendering of fame, desire, appetite, vengeance and loss.

Though two years younger than Crosbie’s dissolute actor, deWitt’s Frances Price has similar misgivings. In the novel’s opening line she says, ‘All good things must end.’ This ‘moneyed, striking woman’ is announcing her early departure from a tasteful Manhattan party held by ‘a similarly wealthy though less lovely individual.’ ‘Born to bore,’ Frances says to Malcolm, her son, of the hostess moments later (as well as ‘Men’s teeth in a child’s mouth. I had to look away’ of an ambassador’s wife). But ‘all good things must end’ is a foreshadowing double entendre: for a key figure in French Exit, all good things will end.

In that same chapter Frances tells Malcolm that a Mr. Baker has insisted on a meeting the following day. With it, deWitt sets his wacky story in motion. Part of the moneyed elite, Frances has been a persistent, cavalier spendthrift, and the money she inherited after her philandering husband’s death has dried up. Faced with the shameful prospect of destitution in front of affluent peers, Frances ponders options before deciding to decamp to Paris. There, she’ll reside at her oldest friend’s apartment with her son and a cat. The family sets sail, and delightful, sharp-edged high-jinx ensue.

Small Frank, the cat, is named after the reviled husband: when Malcolm says, ‘It’s nice that he tried’ when Frances informs him that Frank once gave her a sailboat as a Christmas present, Frances replies, ‘It’s not not nice. You know what would have been nicer, though? If he’d not bought me a sailboat at all, but instead ceased fucking every lukewarm hole that crossed his field of vision.’ Literary genealogists might discern Oscar Wilde and Noel Coward in deWitt’s voice, but Joe Orton and John Waters are there too.

The cat, it turns out, is Frank. Or at least the disgraced lawyer’s consciousness transferred to the cat upon his death. He’s not a bit part. Later, in Paris, after mangy Small Frank has run away and is, for a time, embraced by an ‘ancient baseness,’ he becomes ‘known among the barbarous fraternity of Parisian strays as an animal deranged in his violence’; later still, once Small Frank learns that ‘an animal cannot commit suicide,’ a petty criminal and part-time psychic named Madeleine makes contact with him and regularly holds seances during which Frances and her cohort ask him questions.

Masterfully paced, French Exit remains inventive and endearingly odd throughout. Whether it’s the assistant headmistress in Malcolm’s boarding school (‘a clammy stoic with a paste of hair across her weirdly miniature forehead’) or Frances’s recollection of her mother  (‘She was a demon. And if such a place as hell exists then that’s where she collects her mail’), de Witt offers captivating sketches and quirky but effortless plotting. His novel is uproarious, too—farcical, silly, absurd, droll, campy, ridiculous, witty and, of course, highly mannered—until its final pages. The decisive break from the skewed Old West (The Sisters Brothers) and the skewed folk tale (Undermajordomo Minor) into skewed contemporary reality is refreshing as well.

With cutting but clever remarks, madcap plot strands and an overall buoyancy that bursts from the Parisian apartment (essentially a drawing room comedy set), the novel practically froths with misanthropic delight. While the desolate end point is hinted at regularly—from the title and Frances’s low moods to whispered conversations with the cat and deWitt’s description of the book as a ‘tragedy of manners’—the ‘very awful, stinging pain’ of the final half-page chapter isn’t unexpected so much as shocking. Like Marge Simpson murdering Homer in a furious rage and then calling the police to surrender, a comedic norm has been purposefully subverted. And because deWitt has created deeply flawed figures whom readers like and enjoy and wish happiness for, the ending is unsettling, even distressing. In rewriting genre conventions and not playing by the rules, deWitt has performed a kind of card trick at once perplexing, mysterious and not a little unnerving.

Brett Josef Grubisic is a lecturer of English literature residing in Vancouver. Grubisic is the author of the novels The Age of Cities, This Location of Unknown Possibilities, and From Up River and for One Night Only. His latest novel, ‘Oldness; or, the Last-Ditch Efforts of Marcus O’ was released by Now Or Never Publishing in 2018.