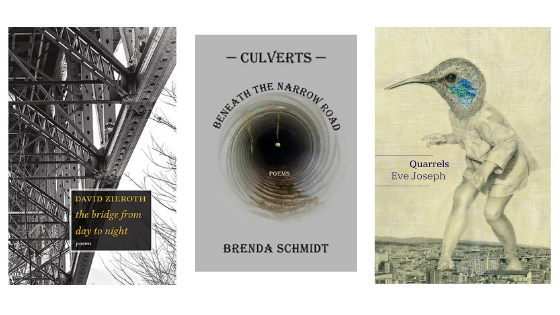 David Zieroth, the bridge from day to night, Harbour Publishing, 2018

A friend and I were talking recently about where our poetry comes from. I suggested it’s heard in the air, caught in passing if our antennae care to pick it up. My friend said that for him it comes up from under the ground, divined like an underwater stream.

This theme recurs in Brenda Schmidt’s new collection, Culverts Beneath the Narrow Road. The title leads us immediately to Basho’s The Narrow Road to the North, the 17th century text often referred to as ‘the story of Japan.’ Also using a first person voice, these linked poems might be a contemporary Prairie reply; we travel into and under Saskatchewan via the culvert metaphor. These poems speak of the everyday, share funny stories and memories of a small town childhood and adolescence, and take us intimately and lyrically into a rural life. On the surface the voice is irreverent, self-deprecatory and plain-spoken even as it simultaneously carries us past a wide-ranging gallery of literary references. I was reminded of Robert Kroetsch’s Seed Catalogue. Both texts contract and expand to span both the truly local—stories of the land, farmers, builders—and a wider history, brilliantly balancing the literary and the personal. Both place Saskatchewan firmly in a wider context while offering access to this unique part of the world.

Schmidt directly mentions many sources—Munro, Woolf, Stevens and Thoreau. She alludes to Stein. The geopoetics of water pour also to Joyce, to Eliot. The literary motif of water-carrying is ancient and powerful, giving voice to healing, mapping, rescue and quest. Further, the image of tunnel and passage is iconic in its representation of fount, birth and origin. For all their philosophical frameworks these poems are extremely playful: ‘Too much coffee/shakes my grip, the camera, makes images/blurry, the spruce grouse a brown streak. Sorry.’ The puns come thick and fast: ‘to leech its own,’ ‘The Hole Idea.’ The quick seesaw between jokey wordplay and profundity is dizzying. One feels rushed along a culvert, bashing against its metal ribs, unsure where or when you’ll be shot out. One of the many things I enjoyed in this collection is the high/low aesthetic hard at work: it is both anti-poetry (‘I use beautiful/too much, more than allowed’) and steeped in a sophisticated lyricism. We sense and inhabit the Prairie landscape and the human that studies and loves it, ageing, lively, curious and amazed.

A purse-sized, well designed book, Quarrels, the third poetry collection by Eve Joseph, dives into prose poems. Most are about ten lines long, reminding me of Jack Gilbert’s The Great Fires. But if Gilbert’s dense, dark poems are like gravestones, Joseph’s are sailboats, a nimble regatta pulled along by capricious winds. The epithet from Yeats speaks of poetry as a ‘quarrel with ourselves’ and there is indeed a sense here of the interior voice, of the poet arguing with herself.

Untitled on the page, the poems are identified in the table of contents by the first line, which is capitalized authoritatively. We have an immediate sense of being in a surreal wonderland, ‘the peculiar and the wonder-like,’ the familiar upended, a telescopic eye zooming in as big becomes small and vice versa. Several of the poems read as dream reports, where the dead appear and an unsettling danger lurks: ‘Broken shells litter the garden,’ ‘I walk bareheaded, forgetting to look up at what might be hurtling toward me.’ The domestic abides along with the apocalyptic: ‘We adjusted to the smell of burnt bones and set the table as usual.’

It’s tempting to read the collection as a connected long poem, as themes and images recur: dislocation of place and search for safety, as if refugees are migrating though these pages. The old country is invoked, fraught with danger; there are lines of hungry people, barbed wire. Borders and seas have to be crossed. Boats recur: the mother rowing, two soldiers rowing, even a sheet on a washing line fills like a sail. The collection is also studded with religious imagery: towers, miracles, floods and creation stories, but less as signifiers of belief than of magic—gods, animals and magicians are layered in with the family, both alive and in dream.

Like Schmidt, Joseph invites along other poets: Rilke, Tranströmer and Simic make cameo appearances to help light the journey. The voice in Quarrels is humble; there are few answers, the narratives quirky and unreliable. Perhaps this has as much to do with the form as the text—the prose poem doesn’t provide the steps of the stanza, the reassuring turn of a volta or the guiding hand of enjambment. It resists narrative. However, in this hybrid form that seems blunt in the absence of line-break, many beautiful lyric moments remind us of Joseph’s earlier, elegant poems, particularly ‘My Mother Took Me’ and ‘Light Stutters Down’: ‘The deeper the man goes, the thinner the beam of light until he’s lost amongst the blue coffins of trees.’ I loved the blurring of perception and Joseph’s struggle with this exploration via the prose form—a struggle that may be playful but not easy. We’re all amateurs, awkward, funny and sad, trying and failing: ‘Nobody knew the war had ended. Searchlights continued to scan the skies. When the old air raid siren in the park went off, every poem, every story, every sentence he’d ever written rose in one panicked movement. A sight he tried, and failed, for the rest of his life, to describe.’

The book divides into three, the middle twelve poems responding to Diane Arbus photographs. These deeply compassionate poems ask how we love, how we connect and collaborate. Although they work within this format, I very much wanted to see the photos; perhaps there may be an opportunity to reprint this section in another context. The final section is an elegy, painful and beautiful in equal measure. It takes an almost obsessive magnified lens to the acute days preceding a father’s death. Sharon Olds’s poems in The Father speak of revulsion and anger, an animal joy in claiming power over the dying. In contrast these are generous and gentle: ‘In bed, the fledgling opens his mouth for one more bite of lemony cake’ and ‘All were welcome. Nobody was turned away.’ Collective fears are shared, the man returns to the little boy, then onward, eventually taking flight as a bird. The final poem—indeed the final line—brought me to tears, as much for what is says about writing poetry as about grief.

David Zieroth’s latest collection, the bridge from day to night, opens with the beautiful poem, ‘North Van morning.’ The first strong image is of ships gliding under a massive bridge that has its own power, its own regard. We quickly sense a place that will go on without us, where we are visitors, secondary to the intersection of wilderness and industry, where ‘squirrels/scrambling through the vines/stop and listen.’ I particularly admired the first of its three sections, where the poems focus most on place—specifically Zieroth’s home of North Vancouver. A lesser poet writing of harbours and mountains might resort to cliché, but he’s at home in this landscape, part of the place. The imagery is local and accessible—ships, animals, family—but the familiarity of the imagery and content belies the skill and subtlety of Zieroth’s writing. With an assured flow to this work, he makes it look easy. All the poems are open-ended—without a terminal period they cascade one into another, refusing to provide a neat conclusion. This form creates a buoyancy, the stresses balanced and at ease. The voice is consistent, calm, direct, with a humility and quiet honesty that reminded me of Seamus Heaney. Reminiscent of Heaney’s last collection, Human Chain, the form performs a recurring theme of inheritance. In ‘man on the SeaBus reading,’ an older man observes a younger, reading: ‘that night I find my own copy/spine cracked, nearing end of usefulness.’ And in ‘coat hangers’: ‘new replaces old/old becomes odd/migrates to the back, unconsulted.’

The central section concerns ancestry, a turning over of the myth and material of family. Here the father is both feared and admired, the mother a safe harbour: ‘I knew how I would fail/if she were not available for my ease.’ The depiction of rural, parochial life—Zieroth was raised in Manitoba in a farming family—deeply engages with the personal but also speaks of wider human experience, a tension balanced between chaos and control. The boy grows into the man now able to shape trauma and fear through poetry: ‘what little/I can see in the moonlight/its emptiness only/what I put there.’

The collection contains some truly beautiful poems, particularly ‘wind,’ one of the few love poems. Here the music of the line is rich and assured. ‘cure for colic’ also is dense with sound, as we learn ‘how to bathe in world-song.’ Frequently animals and birds are invoked, melding with the human. We are all the same, briefly alive in a world that will go on without us. The deep humility in this work refuses to be drawn into tribalism and doesn’t assume certainty. Rather, these words seem like companions in a life that is considering its ending—the last section squarely faces death as a prospect and a presence—considering what is next in its outrageous and ordinary inevitability: ‘how to grasp/the space a person emptied/what words to manifest aftermath/of daily life.’ The collection ends with ‘self-reliance in old age’:

let me not be alone

as the hours fall and fail

or rather let aloneness befriend

the boy in me whose eye

looks to the horizon

chaff in his hair, grain in his hand

Acknowledging the end, not with despair but with a quiet marveling, the bridge from day to night is a profound and mature work from a poet with little to prove.

Miranda Pearson is the author of four books of poetry. The most recent two, “Harbour” and “The Fire Extinguisher” were both finalists for the Dorothy Livesay BC Book Prize. She lives in Vancouver, BC.