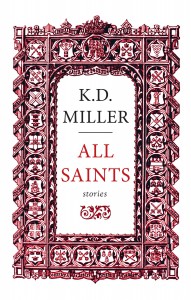 As a seriously lapsed Anglican, I was interested in and, I’ll confess, somewhat sceptical about what the back cover of All Saints describes as ‘a linked collection that presents the secret small tragedies of an Anglican congregation struggling to survive.’ But while replete with allusions to creed and ritual, Toronto writer K.D. Miller’s vision is in no way limited to or confined by this religious backdrop. Some of the stories are only tangentially connected to the church, although Miller offers apt observations for those who will appreciate them: ‘Anglicans don’t really forbid anything,’ notes one parishioner. ‘We just decide we’re above it.’ Church images are frequently tinted with irony, as when congregants ‘slump into position’ to pray. Despite mild cynicism, Miller also suggests that ‘the singing and the chanting and the murmuring…. [the] habits and rituals’ of faith help its practitioners give life shape and sense. This is particularly true for two recurring characters: Simon, the seemingly agnostic reverend, and Kelly, the quirky woman to whom he is drawn regardless of the prohibitions against minister-parishioner relations.

Miller’s stories dance between the sacred and profane and expose the contradictions—sometimes amusing, sometimes tragic—that comprise the human heart. At the collection’s centre is ‘Ecce Cor Meum’—‘Behold My Heart,’ a reference to Sir Paul McCartney’s classical composition. In this story, Kelly navigates her growing feelings for Simon alongside an awareness of her mortality; throughout, poignancy and humour combine, as when Kelly visits a doctor: ‘He opens a file. Studies it for a moment. Sighs. Closes it. Very gently, as if breaking some shocking news to her, he informs her that she is menopausal.’ Later, she recollects when she first began to fall for Simon, the way the ‘morning sun caught the traces of red in his greying hair as he headed through the arch. She found herself enjoying the way his robe accentuated the spread of his shoulders, the narrowing at his hips.’ If we find the sacred anywhere, Miller seems to suggest, it is in the manifestations of our hearts’ desires and our determination to capture something against the inevitable losses of time.

This quest is not easy, and Miller’s characters are often caught at the nexus between loss and longing, silence and voice. We see language both fail and redeem; sometimes silence communicates where speech obfuscates. But Miller’s brilliance lies in her ability to gently, ruthlessly expose the inner life, laying bare the human capacity for self-deception and self-revelation, debasement and transcendence, compulsion and relinquishment. Her characters doggedly negotiate their wobbly way on the terrain that unfolds before those who are neither wholly saints nor sinners, clinging to the tools in hand: confession, ritual and a tenacious belief in grace. Simon’s recitation of the Book of Common Prayer echoes throughout: ‘Most merciful God, have mercy upon me, in your compassion forgive my sins, both known and unknown, things done and left undone.’

Many of these stories do evoke the human need for mercy. One poor soul literally stumbles lost and fear-filled through the dark with shit on his hands, his frail hubris giving way to shame and fear; when witnessing a disturbing assault, an old woman transforms her fear into a strange, ecstatic vision; another old woman, institutionalized for having poisoned her Grade 2 class years before, pens letters of chilling self-affirmation; the only child to have survived this history struggles in middle age to free himself from the fraught legacies of that survival; a middle-aged woman confronts the wild force of a debilitating stroke in the spectre of a horse, its ‘eyes like globes of night’; the church secretary contemplates a momentous windfall by conversing with the lively voice of her dead husband. And through it all we have those things both done and left undone, both said and left unsaid, the desperate need to connect against the inevitable fear of rejection, the careful cultivation of the social mask hiding the fractures beneath, and the charming quirks and foibles that also reside in our most secret hearts.

This is a wonderful collection. Miller’s writing is sharp, free of unnecessary exposition, and her characters’ voices are varied and clear. Like Alice Munro, she does not offer tidy endings or answers; rather, she renders the mixed-up, muddled stuff of life without sentiment or judgment. If redemption exists, Miller locates it in our capacity to realize—in the words of McCartney’s ‘Ecce Cor Meum’—that while ‘Nothing ever remains’ we are nonetheless able to ‘pull through/To the opposite side’ of what ails and fails us. 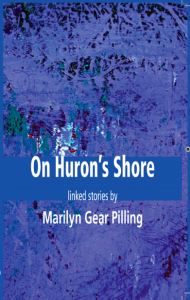 This theme also informs Marilyn Gear Pilling’s On Huron’s Shore, a collection of closely linked stories in the tradition of Lives of Girls and Women. So authentic seem the protagonist Lexie’s experiences that, while knowing little of Pilling’s biography, I wonder if this might be more aptly identified as life writing. Whether thinly veiled memoir or fiction, Pilling’s stories, which span a 1950s childhood to the present time, uncover the compelling in the commonplace, the illuminating in the banal.

The collection is divided into four parts, each corresponding to a stage of life. The first—and, I think, most successful—focuses on Lexie’s childhood and is deceptively simple: Pilling’s experience as a poet renders nuanced, evocative images and subtle complexity. Much of this imagery centres on Huron County, farm country north of Toronto where Lexie and her family spend weekends and summers. Pilling takes us into a world of cobwebbed barns, mice scurrying beneath the floorboards, bats secreted in the attic, unwavering summer heat, creeks and berry bushes, a red-eyed bull with a ‘blue-murder look,’ and, of course, the inevitable flies—flies in the kitchen, flies in the outhouse. This world is both tremendously ordinary and visionary: everything feels potent—as the adult Lexie notes, ‘The gods choose the strangest things to spangle in mystery.’ This is Pilling’s own skill, as she spangles in mystery and meaning the most mundane gestures of life. The ‘surface,’ we are told, ‘is never the real story.’

While setting looms large in these stories, family looms larger. The text traces the trajectory of Lexie’s life in terms of these evolving relationships. Although her own family—husband and children—do occupy some narrative space, the collection focuses on her experiences as daughter and sister. Throughout, her mother is the force around which her children orbit. After hearing a psalm in church, Lexie the child adapts it to reflect her ironic perception that her mother is, in so many ways, like God: ‘Whither shall I flee from thy presence?… If I go to the bathroom, thou art there, outside the door…. If thou foundest this notebook, thou wouldst read it.’ Yet this characterization is not one-dimensional; Pilling allows us to see through the child’s limited vision to understand that her mother has been deformed by the narrow constraints imposed upon her. Lexie likewise exposes the complex heart of her tomato-obsessed, eccentric father, whose reams of rules and passionate philosophies inspire and thwart his children throughout their lives. Such influence extends beyond the parents’ deaths, as when Lexie sees her father in herself, and realizes that she has inherited, on so many levels, his legacies:

One Saturday last summer, I caught sight of myself staggering across the yard in the sun, arms turned inside out by the weight of the wheelbarrow they were pushing…. I took a hard look at that figure lurching along in the heat and finally recognized it. It was you.

In mid life, I find myself haunted by the shadow of your unlived possibilities, which are also mine.

If Lexie’s parents are one dynamic duo in these stories, her siblings are another. Lexie and her brother Graham adore their younger sister, Vivian, from the time she is a precocious three-year-old smoothing tension between the parents to her life as a glamorous, middle-aged, small-town doctor embarking on yet another marriage. Much of the narrative drama rests upon these close, if often fraught, relationships.

While I appreciate the shift from the limited, third-person narration in Part I to first-person in subsequent parts—which I took to indicate an emerging self-clarity—oddly, Lexie seems to become less clearly present in the latter half of the collection, as though in narrating her connections to family and setting she looks too much outward (despite quoting Thomas Merton that ‘Our real journey in life is interior’). Some stories are hobbled by excessive dialogue and others by unnecessary repetition. These are not really separate stories, particularly in the latter half of the collection, but Pilling often ignores this linkage, and so we are told several times that Graham raises horses or that Vivian has remarried another man named Mike. And at one point, Lexie makes beef stroganoff after mentioning in several stories that she does not eat red meat. Some editing was needed to recognize that these are not stand-alone tales as much as mise en scènes in the unfolding of a life. Despite these awkward constructions, however, Pilling’s writing is engaging and provocative. Like Miller’s All Saints, On Huron’s Shore gently probes ‘that liminal place where the world known to the senses intersects with the world beyond the visible,’ and the ordinary is cast in extraordinary light.