Jordan Abel is a Nisga’a writer from Vancouver, where he is in the process of pursuing a Ph.D. at Simon Fraser University. Abel’s work has appeared in numerous chapbooks and periodicals, including EVENT, The Capilano Review, and Canadian Literature. Abel’s first book, The Place of Scraps (Talonbooks), was a finalist for the Gerald Lampert Memorial Award and the winner of the Dorothy Livesay Poetry Prize. Un/inhabited, Abel’s second book, is forthcoming from Project Space Press/Talonbooks in Spring 2015.

Two of Abel’s poems were featured in EVENT 43/1.

EVENT: Your first book of poetry, The Place of Scraps, was published last year by Talonbooks. In order to create the poems in the book, you extracted paragraphs from Totem Poles — a mid-twentieth century anthropological text about First Nations cultures in the Pacific Northwest by Marius Barbeau — and created a series of erasure poems from each of these passages. How did you come up with this idea? What made you choose the work of Marius Barbeau, in particular, as your source text?  Can you tell us a bit about the experience of erasing Barbeau’s words and uncovering/creating the poems hidden within them?

JA: I started writing The Place of Scraps sometime in 2008. My original intention, of course, was to explore Marius Barbeau’s Totem Poles in order to better understand the Nisga’a Nation. As an intergenerational survivor of the residential school system, my connection to Indigenous knowledge and epistemologies was very limited. At the time, I felt like my only connection to Indigenous knowledge was through the library. So, naturally, I ended up finding Barbeau’s foundational writings almost immediately.

However, the manuscript version of The Place of Scraps that most resembles the published book was formed in a moment of pure frustration. I had spent many hours with Totem Poles, but I was unable to translate any of my research into poetry, fiction, or non-fiction that adequately addressed the complexities of the subject matter. Feeling as though I had no other options, I began erasing pieces of Barbeau’s writing and hoping that there would be something there. That process of erasure, of course, carried throughout the rest of The Place of Scraps and ultimately informed how the text unfolded. 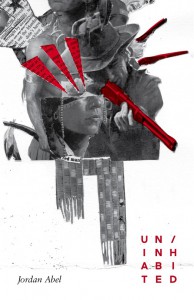 E: Your next book, Un/inhabited, forthcoming with Talonbooks in Spring 2015, uses 91 western novels as its source/research base. So, is this new book made up of found / erasure poems, like The Place of Scraps? Or is it something completely different?

JA: Un/inhabited is a study in context. The book itself is draws from 91 Western novels that total over 10,000 pages of source text. Each piece in the book was composed by searching the source text for a specific word that related to the social and political aspects of land use, ownership and property. For example, when I searched for the word “uninhabited” in the source text, I found that there were 15 instances of that word appearing across the 10,000 page source text. I then copied and pasted those 15 sentences that contained the word “uninhabited” and collected them into a discrete unit. The result of this kind of curation is that the context surrounding the word is suddenly visible. How is this word deployed? What surrounds it? What is left over once that word is removed? Ultimately, the book accumulates towards a representation of the public domain as a discoverable and inhabitable body of land.

E: You’ve just started a PhD in English literature SFU. What are you planning to focus on in your studies? Will you be working on a new poetry manuscript at the same time?

JA: When I entered the program I was hoping to study North American conceptual poetry, but my thinking has changed a bit over the last month. Right now I’m leaning towards a further investigation of the poetics of decolonization. I’m interested in finding a way to talk about Indigenous poets who engage with decolonization (including but not limited to Marie Annharte Baker, Garry Thomas Morse, Marvin Francis and Dg Nanouk Okpik) and non-Indigenous poets who also engage with decolonizing practices (including but not limited to Shane Rhodes, Rachel Zolf, Cecily Nicholson and Mercedes Eng).

To answer your question about the poetry manuscript, I am, perhaps unfortunately, always working on creative projects. So perhaps something will come out of that?

E: Your work has been described as visual poetry and as plunderverse. You just guest edited a special sound poetry issue of Poetry is Dead  and you use audio gear in your poetry performances. You also had a videopoem included in Vancouver’s 2013 Visible Verse Festival . It seems that you enjoy bridging the worlds of literature, visual art and sound/performance. Can you tell us more about this? What, to you, are the limits of the page — or of performance — and are you intentionally pushing at / exploring these limits?

E: Do you write in genres other than poetry? What else — in writing, or otherwise — is occupying your creative attention? How about the two poems in the last issue of EVENT, which are visual poems shaped like insects — are they part of a new project?

JA: Right now I’m spending a lot of time writing academic non-fiction. I used to write a lot of fiction, but fiction and I are on an indefinite hiatus. I spent much of the last eight months working on (in various stages) Un/inhabited. So I’m on a bit of a creative break right now.

The two pieces that appear in EVENT are from a project called Scientia. “Rosalia tiliae” and “Chrysomela morio” are both diptychs appropriated from the language of an old entomology textbook. Every now and then I troll through Project Gutenberg, looking for caches of rich language and textures. What struck me immediately about the aesthetics of entomology was the unusual and beautiful paring of scientific language with striking imagery.

I am always interested in what can be produced from found text, and this project, in a lot of ways, was an affirmation of the possibilities of appropriative modes.

E: What books – or writers – are influencing or inspiring you at the moment? And how about visual art, music, etc.? What else is inspiring/influencing your writing, thinking or research at this point in time?

JA: This list is constantly changing, but right now these are the books that I find myself returning to:
X by Shane Rhodes
Janey’s Arcadia by Rachel Zolf
Corpse Whale by Dg Nanouk Okpik
Decomp by Stephen Collis and Jordan Scott

In regards to art, I find myself being constantly inspired by Edward Burtynsky’s photography. As far as music goes, from an intellectual and creative perspective, I am the most inspired by Oneohtrix Point Never, Nicolas Jaar, Jon Hopkins, Darkside and Dirty Beaches. Arguments could also be made for Forest Swords, Flying Lotus, Animal Collective, Dan Deacon, and CHVRCHES.

Elena E. Johnson’s poetry has been nominated for the CBC Literary Awards and the Alfred G. Bailey Prize. Her work has appeared in literary journals across Canada, including The Fiddlehead, ARC and PRISM international, as well as four anthologies. Her first book of poetry will be published by Gaspereau Press in Spring, 2015.

A special limited edition of Abel’s second book, Un/inhabited, is available now through Project Space Press, and full release for the book will happen in Spring 2015 through Talonbooks.