This review originally appeared in EVENT 42/3.

The coming-of-age story, often with autobiographical elements, is a popular form for first novels. And why not? It follows the common advice to write what you know, and it worked for James Joyce. But like any well-trodden path, the bildungsroman’s march to self-knowledge can grow overly familiar. Corinna Chong’s Belinda’s Rings and Claire Wilkshire’s Maxine are especially intriguing because of the ways they play with and against the formal and thematic expectations of coming-of-age tales. The back cover description says that Belinda’s Rings ‘links together the coming of age of a young biracial woman with the mid-life crisis of her mother.’ But the juxtaposition of these two narratives made me reconsider my ideas about ‘coming of age’ and ‘mid-life crisis,’ the implicit framing of life as a progression of predictable stages, each with its crises and epiphanies. Neither narrative in Chong’s novel really meets those expectations. Fed up with marriage, motherhood and a job selling cosmetics for Merle Norman, a life that makes her feel like a ‘faceless provider,’ middle-aged Belinda becomes obsessed with crop circles and flies off to meet with a group researching them. Meanwhile, daughter Grace is left at home with her siblings and stepfather, where she alternates between acts of adolescent rebellion (getting drunk with her friends) and trying to fill her absent mother’s place (going to her little brother’s school concert). Each of them seems at times adolescent, at times mature; their coming of age is not a single act but a recursive process. And like a circle, it has no ending. 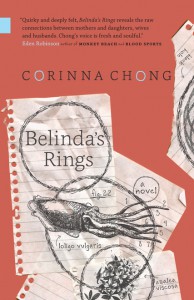 Circles and spheres abound in Chong’s richly figurative language, and drawings of crop circles are interspersed through the text. The novel’s structure, too, is in some ways circular. Belinda escapes her current home and family only to find that ‘Against her will, she’d travelled in one huge circle, all the way back to her childhood.’ Both Belinda’s (third person) and Grace’s (first person) narratives are full of flashbacks, moving back as much as forward. At first, I found this structure frustrating, wondering if the accretion of seemingly unrelated scenes was adding up to something. But gradually I realized that circling back to the past does not mean the characters are stuck: as Grace thinks, ‘It seems like every time you revisit a memory it means something else, especially when you’ve been able to forget it for a while. It’s like the things you experience in the meantime make the memory change.’ Sometimes an event is recounted from one perspective in Grace’s narrative, and then seen again from another angle in Belinda’s (or vice versa). Sometimes a scene is echoed by a different one later in the novel, casting the past in a new light for both character and reader and deepening our understanding of it.

Shifting perspectives are a central theme of the novel. Grace describes trying to see ‘what I actually look like.’ Mirrors, she thinks, never really show this, so she tries making ‘a video of myself, where I pointed the camera at myself and slowly rotated it all the way around my head, 360 degrees.’ But rather than giving her a truer view, the result is so ‘stupid’ she can’t bear to watch it. Perhaps she just does not want to see the truth. Both coming-of-age and mid-life crisis stories often end in an epiphany, an insight into the truth that allows the protagonist to understand herself and begin a new stage of life. But that isn’t really what happens to either Belinda or Grace. Their fascination with crop circles and deep-sea life suggests a search for the truth, but also an interest in mystery for its own sake. At the novel’s end, rather than discovering the ‘true’ perspective Grace once sought, each seems instead to have accepted the constancy of change, including their shifting perspectives on themselves and their pasts. They may not be exactly at peace with the messiness, impermanence and mystery of life, but they know they are stuck with it.

Can you come of age in your early 30s? And doesn’t that seem a bit young for a mid-life crisis? But something of both passages happens to the eponymous protagonist of Claire Wilkshire’s Maxine, who is one kind of adult at the novel’s start and another at its end, a transformation brought about in large part by her relationship with her nine-year-old neighbour, Kyle. Wilkshire’s wry comic tale begins in November 2002, and both the events of September 11, 2001, and the recent death of her friend Cindy loom large in Maxine’s mind: ‘Death is coming, get a move on.’ The question is whether this sense of mortality will freeze her with anxiety or free her to take risks. 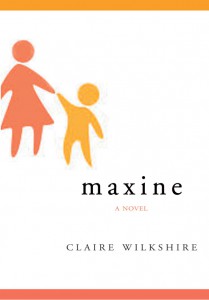 Inspired by a goal-setting seminar, Maxine has quit her job to spend a year writing a novel. While this sounds like a risky move, Maxine has planned it with great care, mapping out her finances and leaving for her successor at work ‘brightly-coloured file folders…in strategically asymmetrical stacks, each of which had a large, lined sticky note on top. The handwriting on the sticky notes was calm and even, and suggested that everything was manageable.’ Wilkshire has a deft hand with revealing details like these. Anxious Maxine lives rather like an elderly shut-in, keeping her life orderly, resisting connection with all but a few old friends, and resenting the responsibility of caring for the goldfish her colleagues gave her as a parting gift.

The saddest — and funniest — thing about Maxine’s big move is that her novel, as the passages quoted throughout the text show, is bad. Maxine may make Frédérique, her own protagonist, a ‘worldly, sexy’ astrophysicist, but she can’t get Frédérique to do anything exciting:

‘Frédérique typed fast and hard on the keyboard…. She frowned and sighed. When she stopped typing she rolled her shoulders and drank a mouthful of tea.’ That’s ‘write what you know’ with a vengeance. And a risky gambit, for Wilkshire invites comparison between Maxine’s novel and her own. Can cautious Maxine’s story avoid being as dull as worldy Frédérique’s? Thankfully, the answer is yes. Maxine doesn’t like present-tense narration: ‘The reason she prefers the past tense is that it’s safe…. With the present, you never know where you are. Things keep happening — it’s disruptive and untidy.’ The choice of present tense makes perfect sense, then, for Wiltshire’s own novel, which draws Maxine into the untidiness of living.

The story starts with a bang, as Maxine grudgingly agrees to babysit Kyle and loses him in the park. This near catastrophe makes her reluctant to have anything more to do with his family, but also bonds them and shows her that disaster is survivable. Slowly she opens her life to Kyle. He pries her off the computer (he needs it for games, after all) and teaches her world capital cities. They watch Lord of the Rings and read Lloyd Alexander’s The High King, stories full of the adventure Maxine has eschewed.

And Kyle enters her in a writing contest, one that turns Frédérique’s story into a thriller. A bad one still, but a story with a shape and purpose: ‘It’s as if the genre of the contest locked her on course so she could follow it to her destination. She knows with every scene what the next one will be.’ Maxine’s story never takes on such a determinate shape, but thanks to that writing contest, Maxine does have a Paris adventure with a man who tells her, ‘Everyone has loss. You move on, you do things,’ and ‘a possible catastrophe is not a catastrophe.’ At novel’s end when a disaster strikes, she’s ready to cope, open to connection, responsibility, risk and joy. If Maxine is thus more truly adult at the novel’s end, it is largely because of what she has learned from and through a child. She is ‘younger’ at the end of her story than at the beginning.

These novels, both made up of brief scenes moving back and forth in time, both dealing with life’s messiness and impermanence, made me think that my notion of a coming-of-age story — tidy forward progress toward epiphany, the end — is far too simple. Chong and Wilkshire suggest that we are always coming of age, figuring life out, and that is something to celebrate rather than fear.