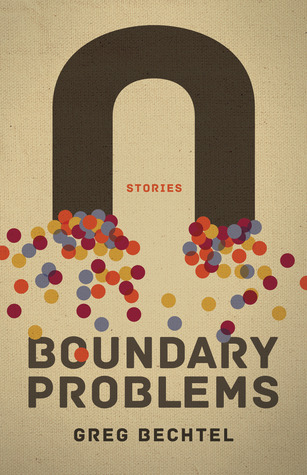 With a title like Boundary Problems, Greg Bechtel’s debut collection isn’t gun-shy about its aesthetics, with its footnotes, subheadings and dramatic shifts in perspective. Back-cover descriptors of this collection include ‘magnetically charged’ and ‘audacious.’ The three-part ‘smut’ stories, like most of Bechtel’s work, ask a lot of its readers. But if we pay due attention, they deliver. The ‘smut’ stories work in reverse chronological order, the first, “The Smut Story (III),” taking the form of a bizarre press release describing an incident involving T. Boop, a mysterious figure who has evidently gone missing following “Hermen’s Erotica and Pornography Night, now more commonly known as the Mother’s Day Affair.” The second iteration of ‘The Smut Story’ is a letter to be delivered to Eva S on her 18th birthday and recounts the Mother’s Day Affair (and subsequent orgy). The letter’s author describes Tia (or Tio—it seems T. Boop somehow occupies both genders) as a kind of walking aphrodisiac, her (his) story making ‘every single person…inexpressibly beautiful.’ The stunned (and ineffably horny) audience of T. Boop’s reading regathers to share more stories, though nobody ‘could pinpoint exactly when we shifted from telling to showing.’ In the final iteration of ‘The Smut Story,’ which comes later than its predecessors despite its label as the first part, we find a brief, formal exploration of T. Boop’s performance, with footnotes filling in the gaps. While the ‘smut’ stories are not substantial enough to function effectively on their own, they form a gutsy triptych, rewarding the patient reader and likely alienating those eager for the sort of quick gratification more conventional stories can deliver.

The less overtly experimental “The Everett-Wheeler Hypothesis” tracks everyman Matthew’s relationships with troubled women with violent pasts. The title refers to a theory that multiple worlds, multiple realities, including what folks in our universe see as the past, present and future, all coexist seamlessly in multiple histories. The story starts when Matthew and El fall head-and-heart-first in love with each other. Theirs is a classic romance of yin and yang, with El’s social conscience and hatred of pharmaceutical companies undercutting Matthew’s off-key interest in mysticism and the occult. Things change when El tells Matthew that sex with him reminds her of abuse at the hands of her father. The third-person narrator nesting in Matthew’s point of view turns this Rubik’s Cube of a confession over and over: ‘This makes no sense. Why would a therapist want El to discuss her daddy issues with Matthew? El doesn’t even believe in that Freud crap.’ From there, the story breaks from El and sends Matthew spiralling through a series of chaotic affairs, each poised delicately on the fulcrum between sex and violence. Bechtel’s willingness to dramatically shift the story midpoint to Matthew’s relationship with Billie, then to Monique, then to other women, before finally putting him in bed with the ‘expansive’ Freya, makes the story a gripping delight.

At times, Bechtel’s fearlessness muddles things. ‘Blackbird Shuffle’ moves between narrative perspectives with less efficacy than others in the collection. The conceit is admittedly tough to pull off: a schizophrenic hitchhiker in mid-carjack meets tarot reading meets Native mythology. At first the reversals in perspective and logic entice; after a while, many readers might be aching for solid terrain. For me, the overwrought narrative voice of the carjacker and the grab bag of narrative elements proved unsatisfying. Still, even when misstepping, Bechtel somehow seems to find his footing. The collection is addictive, forcing its readers to see worlds beneath the world.

The follow-up to her brilliant Alphabet, Kathy Page’s collection Paradise & Elsewhere also pushes boundaries, albeit in more subtle ways. In an interview, Page divides her stories into two general categories: ‘the regular realistic, contemporary kind of story, and other stories that have a mythical, magical, uncanny, futuristic or fable-like quality.’ She suggests that Paradise comprises the latter and, indeed, the stories gracefully tread the gap between the mythic and the real. Page knows just how much detail to give to cultivate ties to the corporeal world. In ‘The Kissing Disease,’ for example, the sensuous pressing of lips is the means by which a deadly virus infects its victims, while the family of ‘Lak-ha,’ plopped in the middle of a desert at the foot of an ancient tree, packs a philosophical punch several weight classes above its scant three pages.

One of the collection’s most impressive tales, ‘Low Tide,’ is a nifty take on what we might call the ‘mermaid genre.’ When a sea creature shucks its marine skin and assumes the land-form of a woman, she takes up with a lighthouse keeper who seems to recognize her. She notes that he calls her Marina, ‘yet he never thought to introduce himself’; she learns his name only after he teaches her to read. Part of the story’s strength is its adherence to laws the reader doesn’t quite understand. Even in its ostensible infancy, the relationship appears to contain within itself an apparition of a previous life. The narrator’s readiness to accept the shadow-life of Marina, ‘whose body had never been found,’ suggests a symbiosis, an implicit agreement that their love, such as it is, inhabits a realm of their own making—bizarre, but with terms both appear to understand.

In ‘G’Ming,’ among the less fantastical stories in Paradise, Page forces her readers once more to apprehend the delicate fabric separating the self from its other. The narrator, Aeiu, a native to G’Ming, must take an offering to his uncle, the local holy man. When he subtly convinces a tourist to give him 50 aeiki, a sum that would allow him to transcend his current life, if only for a while, he must choose between forward momentum and the status quo. In the end, we feel Aeiu’s futility when he muses on the relationship between native and tourist: ‘why do they think they can pretend a walk here is the same as a walk in their own village?… They are seeing my home: they have already had what they wanted. I will never be able to see the place they come from…’

‘G’Ming’ dovetails nicely with ‘The Ancient Siddanese,’ where Page’s narrator—a guide showing tourists the ancient city of Sidda, notable because it was constructed by the blind—makes an observation that holds the key to reading, and loving, the stories of Paradise & Elsewhere: ‘Nowadays no one asks questions of a guide. It either works or it does not.’ Taken as a singular organism with many breathtaking movable parts, Page’s stories work best when we closet our questions and simply follow their lead.