The full prompt: Describe in detail a book, story, magazine, movie or TV show you loved when you were younger. Then use this as a jumping off point to say something about the person you are now.

This is an exercise I give my Personal Narrative students on the first day of class. They have only 20 minutes to write. Despite the constraints of the assignment, students have written shockingly insightful pieces about The Hobbit, The Neverending Story, Captain America, and so on. Using a book or movie as inspiration does three things:

2) It gives the writer an immediate opportunity for using physical detail.

3) It invites the writer to draw analogies between the inspiration material and their personal experience. 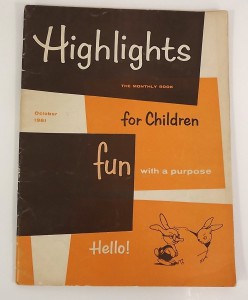 In the Winter 2010 issue of The New Quarterly, Caroline Adderson published an essay called “Highlights for Children,” which reflects on her memories and associations with the titular publication, a children’s magazine. Adderson’s essay contains all the elements listed above. She writes (nostalgically): “How guiltless those seventies mothers were! I would have left my six year-old unattended at the library as easily as I would have handed him over to slave-traders, but times were different then and I didn’t mind. Far from it. I wanted to go. I wanted to look at Highlights for Children.”

The essay includes concrete descriptions of the magazine’s various sections, incorporating sense imagery and excerpting pleasing bits from the magazine:

The covers varied from month to month only in their two feature colours (in 1970 such combinations as turquoise and mint, lime and shamrock, butterscotch and crimson) and the small graphic in the corner. The best part of Highlights for Children was ‘Hidden Pictures’ wherein small pictures were cleverly disguised in the lines of a larger one. ‘In this big picture find the bird, tepee, heads of two fiddlers, fish, pocket comb, two cups, letter S, bell, toothbrush…’

Adderson tells an anecdote about the time she committed the “transgression” of circling these pictures in a library book, and was caught by a mean librarian. She draws surprising associations between this tiny rebellion and her thoughts on writing, saying, “now, forty years later, I believe that for writing to be any good it should be at least a little bit subversive.” The essay concludes, “If you’re not pushing against the boundaries, if you’re not making at least one librarian mad, what’s the point?”