A challenge in creative writing is to use a variety of descriptive techniques to depict ordinary scenes and objects in ways that make them feel new and fresh. Through figurative language and detail, writers turn the familiar into the unfamiliar.

Stuart Dybek does this in his 1st person short story, “Pet Milk,” where the narrator describes drinking evaporated milk as a child:

“Today I’ve been drinking instant coffee and Pet milk, and watching it snow. It’s not that I enjoy the taste especially, but I like the 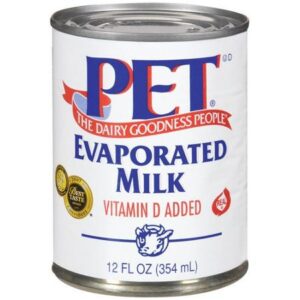 way Pet milk swirls in the coffee. Actually, my favorite thing about Pet milk is what the can opener does to the top of the can. The can is unmistakable–compact, seamless looking, its very shape suggesting that it could condense milk without any trouble. The can opener bites in neatly, and the thick liquid spills from the triangular gouge with a different look and viscosity than milk. Pet milk isn’t real milk. The color’s off, to start with. There’s almost something of the past about it, like old ivory. My grandmother always drank it in her coffee…I sat by her table watching the Pet milk swirl and cloud in the steaming coffee, and noticing, outside her window, the sky doing the same thing above the railroad yard across the street.”

From here, he leaps into a memory of his college girlfriend, and this becomes the piece’s main focus:

“And I remember, much later, seeing the same swirling sky in tiny liqueur glasses containing a drink called a King Alphonse: the creme de cacao rising like smoke in repeated explosions; blooming in kaleidoscopic clouds through the layer of heavy cream. This was in the Pilsen, a little Czech restaurant where my girlfriend, Kate, and I would go sometimes in the evening. It was the first year out of college for both of us, and we had astonished ourselves by finding real jobs-no more waitressing or pumping gas, the way we’d done in school.”

Step 1: Think of an object you are very familiar with, such as an artifact from your past. Choose a possession that holds special meaning for you. Write a passage where you turn it into something new, simply through your description.