Dede Crane and Saleema Nawaz both portray families struggling with the flaws and consequent challenges that make them human. This is not new territory for novelists, but one guaranteed to find sympathetic readers, since a happy family is more often ideal than real. The ‘Anna Karenina principle’ suggests that any fault in a family will ensure its unhappiness. In their novels, Crane and Nawaz counter that by both accepting responsibility and letting it go, we can create something approaching the ideal.

The characters in Crane’s Every Happy Family face an alphabet soup of serious problems: abandonment, alcoholism, 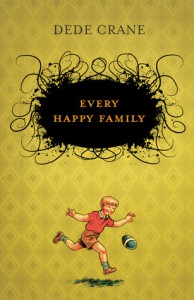 cancer, dementia, depression, incest and spousal abuse. The first half of this novel is more like a cross-stitched sampler of stand-alone designs than the ‘weave’ referred to in its prologue. The third-person narration shifts chapter by chapter to the perspectives of the six main characters, all related by blood or adoption. Crane showcases each character’s problem like a specimen of her handiwork. We empathize as each flaw is revealed, marvelling at the sickness beneath the surface of this apparently thriving family. The narration is more complicated than it needs to be, however. Within each chapter is a generically titled subsection, often from the point of view of one or more family members who exemplify that relationship. For example, ‘Quinn’ includes the subsection ‘Siblings,’ in which we see events through the eyes of Quinn, his brother Beau and his father’s sister Annie. These shifts in perspective can pull us away just as we are beginning to understand and like a particular character.

The perspective we most firmly share is that of the mother, Jill. She is squeezed between her parents (her father in bitter memory) and her three adolescent children, both generations giving her grief. Many women will recognize Jill’s wish to balance everyone else’s needs while maintaining her career. She is constrained by the roles she has inherited and chosen. Being her family’s primary breadwinner reinforces her feelings of responsibility and control. The closer she comes to the perfection she believes is achievable, the more poignant her failures. While Jill seems in charge of her family, each member struggles to conceal from Jill and from each other the extent to which they are neither perfect nor united.

Motherhood is central to Every Happy Family, in which birth mothers and adoptive mothers are equally judged and found wanting. Hurt by her father’s abuse and her mother’s passivity, Jill is nevertheless a dutiful daughter, but she does not see her mother’s dementia until it is full-blown. She is also a serious, dedicated mother: ‘By its very profundity, having children changes you, sobers you. You’re dropped into this chasm of dire love, willing to sacrifice anything for their safety and comfort.’ She treats her adopted daughter, Pema, with such kid gloves that Pema is afraid of her. Trying to do everything right for her daughter, Jill unwittingly neglects her sons. She doesn’t notice Quinn’s alcoholism, a disease she could have anticipated, given that her father was an alcoholic. Even more disturbing, she doesn’t see that Beau has developed an unhealthy obsession with his sister.

This dysfunction ricochets between the generations. Jill’s husband, Les, and his sister, Annie, were adopted. When they finally meet their birth mother, they find a cold woman who had children with a married lover and gave them both up. Thereafter Les supports Jill’s wish to keep Pema from her birth mother until she is older. He feels that ‘[a] damaged mother…will pass on that damage to her children,’ but Crane shows that harm can be transmitted by birth mothers and adoptive mothers alike.

In the last chapter, ‘Chasing the Circle Closed,’ Crane advances three years and steps further back from her characters. The narration of this single day, in which everyone comes home for the ‘Life Celebration’ Jill has organized, shifts from one character to another—upwards of 35 times—like cinematic reaction shots. This abrupt change in structure might frustrate readers who crave more intimacy with individual characters. On the other hand, it is like the frame around a sampler, uniting the separate beings, changed by time and distance and still flawed, but returning to make something beautiful, however askew.

A middle-aged mother of four, Crane conveys Jill’s pain authentically. Jill suffers because she can no longer choose the paths her children take, and Quinn, introducing his new girlfriend to her, is the first to literally bring that truth home. Reluctant to see Quinn with a woman she does not think worthy, Jill reacts to his new partner with conscious, petty disdain. Quinn knows his mother well enough to anticipate the reception his girlfriend will get: ‘Each crisp, defined word, thinks Quinn, is a brick being placed in a wall…. Uneducated, he can hear his mom say to herself as she takes Holly’s jacket which will smell of the cigarette she smoked in the car.’ Quinn’s choice makes Jill question how well she knows him, and she resents Holly for taking over her role. As the novel concludes, this reserved, over-earnest mother, almost without volition, becomes more passionate, more accepting and happier as she relinquishes control. 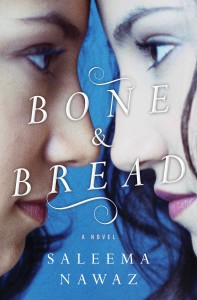 Saleema Nawaz does not have Crane’s long experience of motherhood; nor does her life parallel that of Beena, the narrator of Bone and Bread. In this story of two orphaned sisters, Nawaz moves between present and past, but gives us a single point of view. Beena, an overweight, passive and surly child, is pregnant by 16. She quits school and raises her son, also Quinn, without support. She does not feel Jill’s need to micromanage him; by the time Quinn is born, Beena is already responsible for keeping her anorexic younger sister, Sadhana, alive. After Sadhana’s death, a distance develops between mother and son that is presented as both unfortunate and appropriate. Unlike Jill, Beena is ready to let go of her son with comparative ease:

My son is my idea of my son, who is made up of my past and his and all my memories and dreams for him and who he might become. But he is also himself and his body. The space he takes up in a room, the way he sleeps and eats. The things he wants to keep from me. The way parents and children slide from a physical relationship into something else, from contiguity to separation—it’s continental drift, and it feels just as slow and significant. It feels stable, and then there’s an ocean between you. It doesn’t feel wrong. There will be an opening up to the world for both of us. But there is a desire for fixity, too. A bit of grieving.

Although these lines beautifully describe the painful but necessary change in a parent-child relationship, they only hint at the selfishness that can override a parent’s instinctive generosity. Beena, 34 like her creator, understands her son’s needs. How she achieves closeness while fostering his independence is the focus of this complicated novel.

This is a murder mystery in which secrets and spying dominate every relationship, but suspense is diluted by many subplots. One is the 1995 Quebec referendum on separation. Another is the story of the Essaids, refugees seeking immigrant status in a province unwilling to embrace them. These subplots reflect the theme of belonging—the essence of family—that Nawaz spoke of at the Vancouver Writers Fest in 2013. Relevant as they are, however, they decrease the intensity of our connection to the characters rather than deepen it.

Rich imagery, too, both enhances and detracts from the central focus. Fire and bones dominate. Fire destroys, but it also bakes the bagels that keep the family alive, physically as well as financially. Bones invariably intimate death, most dramatically for Sadhana. Nawaz brings the images together to foreshadow the sisters’ fates:

There’s a theory…that the universe is getting bigger. It will keep expanding, like a huge loaf of bread rising, like a great fat belly, until there’s nothing left to make it out of, no more heat….

There’s also a theory…that the universe is getting smaller. Millions of years from now it’s going to start shrinking and heating, like fat and flesh melting into bone, because it is the destiny of things to come together.

Such prolific imagery is a delight, but it can be a distraction when those images refuse to ‘come together.’

Beena concludes that loving strangers might be easier than loving ‘the people you ought to be nearest to in the world… Tending to principles instead of to people with all of their flaws.’ Nevertheless, she and Quinn are ready to share ‘the work of getting closer, of loving harder,’ unlike Crane’s characters, who find private solutions to their problems. Though they accomplish it in different ways, each family achieves a qualified happy ending in these equally compelling novels.