This review originally appeared in EVENT 42/3.

Though distinct in style and conception, these remarkable books demonstrate mature vision and formal command: hallmarks of poets in their heyday. I’ll take them on one at a time but, juxtaposed by happenstance, they seem collectively to frame a preoccupation with lyric language as a means of managing (and even celebrating) a shared, remaindered humanity. These poems persist in their search for an uneasy but necessary verbal music, for a line that aspires to set itself against the demise of poetic insight. ‘My eyes are the bandages of my eyes,’ Russell Thornton writes, wanting to remediate both language and vision in the carefully balanced circuit of a momentary pentameter. There are ‘still songs to sing beyond/the human,’ as John Reibetanz translates Paul Celan’s ‘Faddensonnen.’ The poems of Thornton, Compton and Reibetanz offer neither panacea nor placebo, but attempt temporarily to suture the ontological wounds of a fractured human condition.

Birds, Metals, Stones & Rain is Russell Thornton’s fifth book. The typography and page design — by Mary White — suggest sculptural balance and restraint: significant aspects of Thornton’s poetic geometry. Describing ‘Men Fixing a Roof in the Rain,’ Thornton notes how ‘They have measured, cut, put in the right place/what they were supposed to put in place; they/intend their work to stay.’ Against the entropy he associates with inhuman realities (the lapidary wear of rain on tile, for example), Thornton sets the human ‘work’ of making, that even ‘while it is being destroyed,’ wants to hold fast to measure, and to assert temporary stays against confusion. Attention to rhythmic and textural detail gives Thornton’s taut lines a sense of firm resolve, even as they seem to remark on their own undoing; notice how the word ‘cut’ in the passage I have just cited actually cuts through the line, acting as both laceration and mortar, split and joint, or how the repeated pronoun in the next line hangs like an outrider after that semicolon, lurching into an enjambment and tilting the line off centre, while simultaneously closing out its syllabic metric, finishing the count ‘in the right place.’ Thornton’s poetic genius involves close listening to the drift of cadence and phrase. His craft does not aim for virtuosic control, but looks to enact, as rigorously as he can, the limitations of human mastery, and the pathos of our drive to overreach ourselves, to remake an unruly world in our own image. His poems are preoccupied with a desire to regulate the apparatuses of meaning, and a correlative recognition that words both fray and exceed their artificial bounds. He recalls his two-year-old daughter’s ‘favourite among her first words:/seagull’ but notes how, running ecstatically toward some gulls ‘clamouring and flocking’ around her, she also ‘runs out into all/the words that will ever come to find her,’ and instead of Adam-like asserting any sort of nominal dominion over the creatures of her nascent world, finds instead how that world, as Thornton puts it, has been prised open ‘like a door’ onto an anarchic abyss. In a double sonnet, ‘Blade,’ Thornton recounts a dream in which he wields a knife against his parent in a frustrated attempt at self-mastery that is both violent and prayerful, mortal and vital: ‘ I lean and concentrate/what strength I possess, worshipful.’ The blade, like the finely edged poem, can both wound and heal, be both scalpel and balm; the ‘strength’ that Thornton values is neither egocentric nor declarative, but worshipful in that it entails something like a faith, a confidence in the capacity of the voice to open up, unflinchingly, onto the vortices and abysses that inform this inevitable shortfall of language.

The title of Anne Compton’s collection, Alongside, suggests how she has come to understand the relationship between word and world: a closeness, a proximity. Her poems map the asymptotic promise of intimacy, of meaningful contact between self and other, self and object; they often aspire to an acuity of vision, a ‘sight so keen,’ as she puts it in ‘Seeing Things,’ that can somehow apprehend the very ‘Photons of light,’ the particulate stuff of vision itself. But this yearning for integrity, for the permeation of sense to ‘touch infinity,’ tends only to emphasize reflexively in Compton’s poems the gaps and insufficiencies that inhere in language, as disclosure or approximation: ‘Every simile is short-/sighted,’ she suggests in ‘ Cities, now and then.’ As with Thornton, this shortfall is not necessarily an occasion for despair — although the opening section of Compton’s book, from which I have been quoting, is a set of elegies for an unnamed poet, obliquely addressing his absence and her loss. Instead, Compton’s poems persist by uncovering lyric intensity in the substances of want, the thick imperative she describes as a ‘need’ to try to get things into words: ‘An attention//I can’t let go, needing to name the beautiful in the least sprig.’ As with Thornton, this desire to nominalize seems to be motivated by virtuosic mastery, but as her book progresses her poems also tend increasingly to embrace that letting go: ‘Words too, once spoken, drift among wildings.’ Her diction characteristically melds together a quotidian plainness and an assonant lushness, the domestic and the esoteric, to create a kind of verbal ‘tangle’ — a frequent trope in these poems — that both seduces and confounds: ‘the ceremonial of the least chore timed our days’ (‘Rope Handles’). Her lines are at once deeply crafted and rhythmically loose, expansive. But description, in Compton, is not a matter of containment or enclosure, of fitting word to thing, but instead it wants to open up language to the inapprehensible: ‘The natural fact, even without lift-off, transcends the gloss of words.’ In the crossed valences of the word ‘gloss’ here, Compton indicates sheen and annotation, sensibility and sense: the veil of semblances in which her texts enmesh themselves. Her writing points to a persistent, saving grace, a lyric remainder — given ‘the small manoeuvres left us now’ — that can still find its way somehow into these moving, finely made poems. 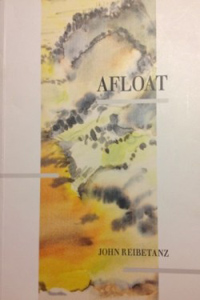 Most of the poems of John Reibetanz’s Afloat deal with water, but as with Thornton and Compton, also seek out elemental resonances: ‘all nature wants to be water,’ Reibetanz notes in the opening poem, but this Herakleitean claim is quickly offset by a careful nuancing — akin to Compton’s reflexive honing — of the apparatuses of attention: ‘we see/ourselves in this buoyancy,’ afloat and partially immersed in the shifting streams of sense. Reibetanz is a poet’s poet, showing us how it is done, and done well. His work converses with, repurposes and translates the involute flows of literary history, but also aspires to immediacy amid these formal mediations. ‘Come down,’ he tells himself, ‘from your mind’s penthouse, that fastness/deaf to traffic.’ Inspiration, if any is still to be had, cannot abide the rarefied: ‘In search of ground to stand on, air to breathe,’ a drowned-out muse needs to walk ‘the torso’s paths’ to find embodied vitality. Reibetanz’s poems, on first pass, do not seem to speak from the gut: formal craft, reining in unruly breath, predominates over material and perceptual flows. But despite their sculptural rigour, these poems also gesture toward exceeding their bounds, to discovery not as colonization but as encounter: ‘New-found, never-caught,’ leaping ‘through the heart’s grip.’ A nostalgia for newness and a yearning for some missing visionary wonder impel Reibetanz’s writing to catch hold of a ‘ new-found voice’ that ‘ takes off’ from the quotidian. He asks for poetic structures that both enable and reveal, trying to transcribe a perceptible music, for instance, from the lovely jumble of birdsong: ‘How but through/this blueprint for an architecture of air/can the eye make out what the ear takes in.’ He is just trying to see those birds he hears, but the idea goes further, wanting a style answerable to those wild, corporeal rhythms, and trying to shape it from the received patterns of an all-too-human poetry, manifest here in those crisp, tensile pentameters. The book goes on to develop longer, fractured lines as if to accommodate this tension:

The multiple, off-kilter caesurae loosen Reibetanz’s characteristically taut lines, and give his voice a flexible timbre that, in some ways, offers renewal, offers a revitalized music. Afloat aims to renew and to revitalize poetic resonance.

Read a recent interview with Russell Thornton on the EVENT blog.