This review first appeared in EVENT 42/3.

Through provisional portraits, these collections by Michael Crummey, Michael Mirolla and Stephanie McKenzie focus on journey and ekphrasis in different ways. Each poet has determined how to capture something ephemeral and pin it down for the reader to experience. To avoid torturing or killing their specimens (dead, static things are never as appealing), what sort of container best serves subject, poet and reader? A snow globe? A world in miniature? A bell jar? A photo? 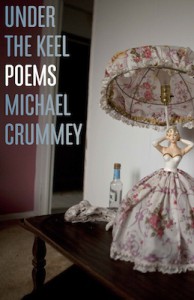 In Under the Keel, Michael Crummey’s first poetry collection in 10 years, an itinerant photographer haunts the pages of the middle section, ‘Dead Man’s Pond,’ though photographic language (‘frame’ and ‘celluloid’ ) also appears elsewhere. The central characters in the portrait poems (‘Patience,’ ‘ Small Clothes,’ and ‘Birding’ ) of early- to mid-20th century Newfoundlanders note that the photographer has encouraged them to be arranged just so, echoing ‘Viewfinder,’ a late poem in which he urges his subjects to ‘Hold still.’ Family descriptions, of the speaker’s new wife and dying father, are particularly evocative. Though there is no touching in his dream of his dead father, great intimacy exists in this collection, leaving me bereft at its conclusion.

Crummey brings to life a plethora of real people, not specimens: the modest woman who refuses to be photographed because the photographer saw her underwear on the line (one of Crummey’s thanks is to his wife’s ‘small things’), the gap-toothed lighthouse keeper, and a baptizing priest, among others. Throughout the volume he shows his novelist’s strength in rich prose poems like ‘Getting the Marriage to Bed.’ (Even his ‘Random Thanks’ reads like a poem.) Deeply rooted in place, the idioms such as ‘mozzle,’ ‘gabbling,’ ‘fucken old gulls,’ ‘sove’ (charming irregular past tense of ‘ to save’ ), and ‘we baits’ (lack of agreement) add colour, individuating characters.

The four parts of ‘ Hope Chest’ read like the age-old marriage ditty: ‘Something Old,’ ‘Something New,’ ‘Something Borrowed,’ and ‘Something Blues,’ the latter complete with bridge and mordant reprise, though the sequence is far from sentimental — his father’s death forces him past ‘a resistance//I’ve always felt to risking love.’ ‘Something Borrowed’ tenders an apple he’s taken from his beloved:

Can just resist the temptation
to lick your fingerprints
off its nearly flawless skin.

The book’s first section beguiles and shocks with the swell of a below-ground current of harsh first lust, the town’s collective everyboy wanting ‘to see the world undress.’ The poem ‘Boys’ speaks of ‘a communal urge we suffered alone,’ pointing to the shared dark desires and pack mentality of the town’s male youth. ‘The Mucky Ditch,’ a literal place with ‘a honeyed channel, an oily serpent,’ could well stand for the sordid mystery of female genitalia. ‘Girls’ ends this way:

The mystery and violence of sexuality overlay a stellar poem in
the second section about animals: ‘Fox on the Funk Islands’ features a rapacious solo female predator ‘wandering the well-stocked aisles.’ The hunters, a ‘ we’ that counterparts the everyboy of the first section, admire her cunning, bewildered at her solitude. The ending comes abruptly:

Shot her our last week out there before the boat arrived,
and we each laid a hand to the ratty coat

as if to apologize for the necessary offence,
a gesture of awkward, amoral reverence.

The touch is a kind of ‘finger skin,’ which teenaged Albert from an earlier poem, an older boy whom the little boys look up to, spurned his girlfriend for not allowing. Sex and death elide beautifully. 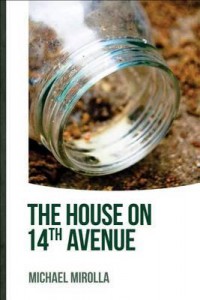 ‘In Transit’ is the title of poems in both Crummey’s and Michael Mirolla’s collections, with three of the same title interspersed throughout the latter’s The House on 14th Avenue. The first, subtitled ‘Primary Colours,’ begins the book. Itself in three parts, it cleverly outlines the death of the speaker’s father with compact, powerful monologues narrated by unique medical paraphernalia, such as ‘the hip screw-plate’ and ‘the leg brace.’ The verbs at the ends of early lines such as ‘the ghost limb sings’ (part 1) and ‘the bedpan laughs’ (part 2) reappear in the third part, ‘Passage,’ at the conclusion of a repeated line, ‘the incandescent word/that will make him sing’ (‘sing’ then replaced by ‘ respond,’ ‘ moan,’ ‘ laugh,’ ‘ chant’ and ‘ echo’ ), concluding ‘that will make him inscribe/that will make me real.’ This foregrounds the movement to be taken by the speaker in bringing his father (and mother) to life through many more journeys, past, present and future.

The prelude of ‘Inventory III: Fibonacci’s Abacus,’ ‘the worlds awake/as prehensile thumbs/clutch a writing tool,’ closely resembles Seamus Heaney’s revelatory equating of his pen to his father’s shovel, his epiphanic ‘I’ll dig with this.’ (‘Digging’ is one of three epigraphs.) In ‘Portrait,’ the speaker nails his mother to a wall, where ‘Slightly tilted,/[she] hangs/smiling.’ In another poem he has ‘her pinioned/ against the page, a new-born creature who is/and is not my mother,’ the amphibian nature of his parents running throughout the text.

The back cover reads, ‘ The avalanche of adjectives will take by surprise even the most literary-tutored reader used to narrative of verbs and action.’ Consider me beyond surprised — closer to brain numbed. If the intention (as with the annoying frequent use of ellipses) is for the reader to slow down to reconsider, it is not without its negative consequences. However, the number of adjectives, or perhaps my distaste for them, seems to diminish as the book continues. ‘Profumeria,’ for example, is dense: his father ‘pokes at sweet grapes that trail a nasty stain/like ancient bruises’ (emphasis added), yet the poem is redeemed in the next words: ‘Like the purple marks/left by prison camp guards.’

Like Crummey, Mirolla is excellent with lists and clever elisions, such as ‘grim (f )utility.’ In the poems about his dead father, I was reminded of Sharon Olds’s The Father and her earlier works, particularly ‘I Go Back to May 1937,’ in which she visualizes her parents meeting for the first time, wishes on some level that they had never met, but realizes that she would then have not been born. Her poem ends with a [wo]manifesto: ‘do what you are going to do, and I will tell about it.’ Mirolla’s comparable poem, ‘The Honeymoon (1946),’ is less self-focused, questioning the reality of what he wants to expose: ‘An image within a composite/within a poster…’ If Heraclitus cannot step in the same river twice, Mirolla is in the same boat, to use a metaphor less skillful than his.

Poems about the father as POW are rich, with allusions to Tiresias/Oedipus, Escher, Proust, Plato, Homer (one of the three epigraphs is from The Iliad ), Heraclitus, and others. ‘Googling 40 Kilos’ (the weight his father says he has shrunk to) is a found poem that reads like code. ‘The Vanishing Man…at 95’ shows how malleable story is, that at such Judeo-Christian significant occasions as ‘ (Easter, I  think)’ and ‘ (Christmas Eve, perhaps),’ memory is tentative, slippery, his father’s weight while in a concentration camp changing with each telling. The speaker ‘ feel[s] the urge to remind him/it had been “40 kilos, skin plus bones”/the time before,’ but then asks, ‘But who am I to break the spell? To halt/the shrinkage?’ 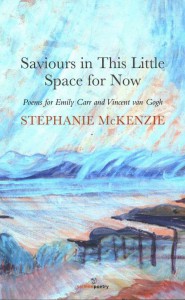 Stephanie McKenzie’s journeys in Saviours in this Little Space for Now are more interior and academic as she looks at art and researches the lives of her two subjects, Vincent Van Gogh and Emily Carr. The academic thrust is seen in the beginning of several poems: a journal entry or curator’s notes, before the poem which jumps from it. A wealth of explanation at the end of the collection shows painstakingly careful research on the artists: two pages of notes on the text (specific footnotes attached to the poems would have been more useful), an afterword of six single-spaced pages, followed by two pages of notes on it, then a works cited.

The collection is almost equally divided among poems to, about and by the two subjects. Point of view changes, cleverly, with direct address from the author to both Carr and Van Gogh, from the author to the paintings and their subjects, and in monologues from each subject. ‘Camping to Find Carr’ outlines dates and places where Carr ‘probably travelled,’ showing the desire for accuracy. In part a quest like Stephanie Bolster’s White Stone, ‘ Dear Carr’ has the possibility of Emily being relocated to McKenzie’s present, but the author chooses not to bring her into the Internet/pharmaceutical age, feeling protective of her charge, ‘ dear Em’; she also wishes for Van Gogh ‘the comfort of a loving home, slippers/slipped on your feet.’ Deeply affecting.

Why these two painters? Poet Kate Braid unites Carr and Georgia O’Keeffe in To this Cedar Fountain. In her prose, McKenzie mentions specific journalists who note the Van Gogh influence on Carr and quotes Carr’s journals on this point, but one wonders why the concern with the literal truth? Carr and Van Gogh cunningly bleed into each other in the recto and verso of her first section — isn’t that reason enough? She writes about a ‘recent finding’ that ‘Carr had been to France in 1901’ and might then have seen a Paris exhibition of Van Gogh’s work. McKenzie refers to the interest scholars will find in this tidbit, but what about what poets think? In ekphrastic reinvention is cautious academic approval necessary?

For example, a poem about Carr’s painting Vanquished, ‘ View of what was probably once an Indian village (?),’ shifts its focus from the poem to the history behind the painting. Elsewhere, McKenzie seems tentative about her role in examining the paintings and the painters. In ‘ Trip to The Potato Eaters, or Nuenen,’ as an aside, she says, ‘ (for some strange reason, I am in the painting, too),’ as if that needs to be articulated. The poem becomes a striking indictment against female poverty, concluding, ‘ Women, your rights grow thin. All eyes in danger.’ Feminism sneaks in elsewhere, even more strongly. ‘Diagnosing Carr’ ends with this: ‘How wombs are lepers in my time. Disfigured./ Nerves damaged. Men’s chalk scores lines//around our regions.’

Most of the poems are rich, thoughtful, lyrical. Van Gogh being institutionalized is stunningly alluded to in ‘Wheatfield with a Reaper (after Van Gogh)’:

Nothing peaceful about it. These bunches of wheat
curl with a razor’s edge and all the while
a small path leads to peace. Or so it seems.

The reader sees the painting, the painter, the poet and perhaps herself. This is McKenzie at her best. As is Crummey throughout his flawless collection, which conjures vivid characters. Not simply looking at something along the end of a pointing finger, the reader becomes part of their worlds.

We are one day away from our Indigenous Voices (Vi

Announcing the winners of the EVENT Magazine 2020

Issue 49/3 is making its way to your mailbox. This

"For generations my family has tilled this stony p

We are thrilled to announce our 5th annual Indigen

“You find yourself in the Milky Way / The pace m

“The boys you grew up with crowd around parking

Issue 49/3, our notes on writing issue, is coming

“When the water spills from the drainage holes,

Want to stay up-to-date with EVENT? Sign up for ou

EVENT will be accepting fiction submissions for a

Our 2-for-1 holiday subscription offer is still on