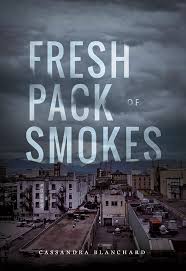 It’s poetry month! Cassandra Blanchard is one excited debut poet. Her new book, Fresh Pack of Smokes will launch on April 24th in Vancouver (and then Courtenay, Victoria and Nanaimo) with a few other poetry friends and novelist Victoria Hetherington.  This vibrant and raw collection dissects a lifestyle the poet once knew living a transient life that included time spent in Vancouver’s Downtown Eastside as a bonafide drug addict.

This is your debut collection. Tell us about your journey from submitting to literary magazines to working on your final edits with Nightwood.

Actually there is some miscommunication about that as I haven’t been published in your average literary magazine. When I was fourteen I published a poem in Skyline magazine, a year ago I had two poems published in a chapbook edited by Amber Dawn, and I am getting four poems published in Hustling Verse edited by Amber Dawn and Justin Ducharme. I submitted a couple poems to Room magazine too but got rejected there. In May 2017 I submitted around four poems to the Nightwood Editions submission website. Seven months later I got a response and to be honest I almost completely forgot that I submitted poems to them. Over the next year I submitted my full manuscript, wrote more poems to add to that manuscript, waited some more, and finally Nightwood offered to publish my book. It was quite fun going through the editorial phase as I feel that I got to know my work better. It has also been wonderful seeing how books get published and all the steps that are involved in bringing it to fruition. My submission to Nightwood Editions was my first time submitting to a publishing house and I was amazed that I succeeded.

Why did you call your book Fresh Pack of Smokes?

I used to be a heavy smoker and my stepdad was teasing me one day and coined the term “fresh pack of smokes.” It stuck with me and when I wrote my poems I realized that the phrase would really work as a title to my book. In the drug culture many users are also smokers and cigarettes are quite important. In jail, before the tobacco ban, cigarettes were used as a type of currency. On the street, cigarettes usually cost 50 cents per cigarette and a lot of people sell them on the side. So during my addiction getting a “fresh pack of smokes” was a real treat. Cigarettes go hand in hand with substance use so that is why I used the phrase for my title.

Your poetry is seemingly personal, and abandons traditional forms in favour of the prose poem shape. Were these poems ever in any other forms–shape-wise?

There were a few poems in my book that used the traditional poetic forms but my editor and I agreed to cut them out. We did this because those poems did not fit with the general trajectory of the book. I wrote the poems with the prose shape because I wanted to grab the reader and not let go. The poems are basically one big sentence and it has an urgency that I believe captures the reader. I also wrote these poems the way I thought about them, like stream of consciousness. I would write them down the way I would think them.

Who are some of your favourite poets in Vancouver and beyond?

I am a huge fan of Amber Dawn and Chrystos. The reason I even started to write my book was because I studied Amber Dawn’s Where the Words End and My Body Begins in school and it inspired me to write about my own experiences. She has supported me since the beginning when she agreed to read some of the early poems I wrote. I’ve loved Chrystos since I was a teenager when I read her book Not Vanishing. I was blown away by her writing. She definitely influenced the way I write as well in the way her poems are structured. It is so important to have such a strong Native woman write such visceral poetry.

What are you most excited and/or nervous about this debut tour?

I’m very excited about meeting the poets and writers whom I am going on tour with. All of this is new to me so having other people I can read with really helps. I am nervous about doing the actual reading as public speaking definitely gives me anxiety. I have chosen the poems I am going to recite and I have been doing a lot of practicing reading them out loud. I am really looking forward to this mini tour and I hope it all goes well!