Sam Shelstad’s Cop House drops into the world this fall from Nightwood Editions, and in this exclusive interview, we get some behind-the-scenes dirt on what went into creating this fascinating debut, a collection of short stories. But who is this guy anyway?

Sam Shelstad lives in Toronto, Ontario. His stories have appeared in The New Quarterly, Joyland, Prism International, Carousel, The Puritan, Grain, The Fiddlehead, The Feathertale Review, The Dalhousie Review and The Rusty Toque. He was longlisted for the 2014 CBC Short Story Prize and a

runner up for the 2014 Thomas Morton Memorial Prize. His work was featured in Joyland’s “best of” anthology, Retro 4. An excerpt from his novel, Rain Rain Telephone, was a finalist for the 2015 SLS-DISQUIET Graywolf Prize. Shelstad also contributes to McSweeney’s Internet Tendency.

NGM: When did you start working on the stories that wound up in your debut collection?

SS: The earliest story in the collection is “Blind Man,” which was written about five years ago. It’s the third or fourth short story I ever wrote. Most of the stories from that time in my life are embarrassing messes, but I’m still fond of “Blind Man.” The last one to enter the collection, “Bowman,” came into being a year ago. After writing “Bowman” I felt like I had a book and so I started putting together the stories that became Cop House. I was working on other projects during this time, but it took about five years to complete this book.

NGM: Who are some of your biggest influences?

My favourite short story of all time might be “Gimpel the Fool” by Isaac Bashevis Singer. My dad showed it to me a long time ago and I keep rereading it, over and over again. It’s so dark, so sad and so funny. My heart will always go out to Gimpel. Another favourite is “The Heart of the Park” by Flannery O’Connor, which is also a chapter in her novel Wise Blood. It’s partly the story of this strange kid’s daily routine of obsessively looking at the same thing 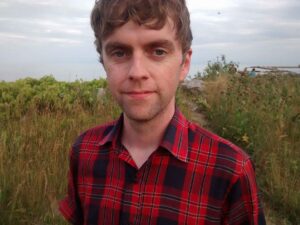 s in the park in the same order, every day. I like stories about manic, obsessive people. I love the endless reimagining of what a story can be and perfect deadpan humor of Lydia Davis. David Foster Wallace’s Oblivion is a definite influence. J.D. Salinger’s Nine Stories too. Anything by Paul Bowles. I probably stole from all of these authors in equal parts in the creation of Cop House.

NGM: Is your personification of arctic wilderness in “New Ice Kingdom,” the first story in your collection, based on any personal interest in these creatures? Did you hear about the iceberg in Antarctica about to snap? Perhaps you could work this into your marketing campaign?

SS: The initial inspiration behind “New Ice Kingdom” came from a photo I stumbled upon, of a baby polar bear riding around on an adult polar bear’s back as it swam in the water. The idea of writing a story about this polar bear’s life came to me while I was staring at the picture. I imagined that the adult bear was the baby’s father, and then I started wondering what would happen if he was estranged from his son, remembering what it was like to ride around the water with him on his back. I decided that the father would be exiled to a territory called New Ice Kingdom and then worked backwards to figure out why he was exiled. Then I came up with the voice of the polar bear and started writing. It was interesting to set something in the animal world because there’s no culture or class or technology, so the elements of the story become simplified. You have to focus on the characters’ relationships and their food source and the weather. It’s like when a mystery writer sets their book in the past so they don’t have to deal with cell phones derailing the plot. When you write a story about a polar bear, you can forget about the internet, racism, landlords and anything else uniquely human, which can be a fun and freeing experiment. 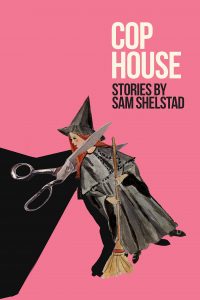 The story “Spirit Pals” also started with me staring at a photo. I came across a picture of a “Beware of Dog” sign that looked like it had a bite out of it, as if the dog had attacked its own sign. I thought about the kind of person that would purposefully doctor their “Beware of Dog” sign in such a way to ward off intruders, and the plot sprang from this character.

NGM: What are you most looking forward to with the release of Cop House?

SS: I’m curious to see what people think of the stories and which ones people are drawn to the most. Some friends and family have read the stories I’ve published in literary magazines, but I rarely hear from strangers about my writing. Mostly I feel like I write stories for my computer—much of what I’ve written is still sitting on my laptop, unseen by other humans, and will likely stay there. It’s a huge honour and a thrill to have a book that will be in stores and libraries and that people I don’t know might read it.

NGM: Finally, what exactly is a Cop House and why did you use it for the title?

SS: In the story “Cop House,” the main character Ruth is surrounded by cruelty and violence, but she’s firmly set in her optimistic outlook. When she was young she was frightened of her sketchy neighbourhood, and her mother would calm her down by telling her they lived down the street from a “cop house.” Her mother meant that a policeman lived down the street and would surely take care of anyone trying to harm her, but young Ruth thought her mom meant that all the neighbourhood cops lived in the cop house together—that they slept in bunk beds and went swimming in the backyard and wore matching pajamas. The thought of this whimsical house of friendly cops continues to set her at ease into adulthood. It’s a mantra she uses to remind herself of the inherent goodness of the world, even though she’s waist-deep in hostility and malice. Where Gimpel the Fool has his faith in God, Ruth has her cop house to keep her sane, and the story of “Cop House” is where Ruth’s relentless optimism is truly tested. I chose this as the title for the book because I think it’s catchy, for one, but also because most of the stories involve characters who are guided by their own light—who, for better or for worse, deal with adversity by following a personal, uniquely flawed system of belief or else use that system of belief to justify their morally questionable behavior. The characters all have their own version of a cop house to lead them through the world.