“On Watch,” Hilary Dean’s winning piece, is part of a project exploring issues of identity and belonging within the larger framework of mental health. Her award-winning documentary film, “So You’re Going Crazy…,” delves into similar territory, and aims to help people dealing with mental illness. Thanks to the wonders of e-mail, we overcame geographical distance and were able to converse back and forth over the course of a few weeks. 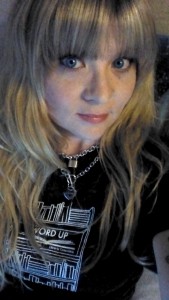 Hilary Dean (whose T-shirt features the Word Up Community Bookstore)

EVENT: Your winning Non-Fiction piece “On Watch” depicts a close-up moment of recovery and all the particularities of that (“the young counselor with all the scarves”; so much that’s described as “nice” and the implication that none of it is nice; power struggles, family secrets, the secret of the recovery itself) and yet also manages to pull back at times and force the reader to confront some of life’s greatest existential questions: Why are we here? Where are we? Who are we?

HD: I don’t know! Things are so weird these days that the simulated world theory is making sense to me because it feels like we’re being played with.

E: Two years ago, in 2014, your piece “Vocational Rehabilitation” was the winner of this very same contest (and went on to be named a Notable Essay in Best American Essays 2015). How does it feel to have another excerpt from the same project win again?

Hilary: It’s exciting for me, I’m very grateful. Especially to have my stories selected by Ayelet Tsabari and Deborah Campbell, two writers I greatly admire.

E: Can you talk a bit about the project these two essays are from, and perhaps the ways in which it has changed since we last spoke to you about it?

HD: Since 2014, I’ve received a new grant from the Toronto Arts Council, which has allowed me to keep writing. I was also shortlisted for the H.G Wells competition in the U.K, and two more excerpts from the novel have been published. “Promises” won the Lascaux Prize in Fiction and “Comfort” will appear in Matrix Magazine’s next issue. In my last interview with EVENT, I said that I was living inside a dark whale of a chapter I was writing and “On Watch” is an excerpt from that place/ time/ whale.

E: You call the project you’re working on a novel, yet two of the chapters have won our Creative Non-Fiction Contest, and other sections have won prizes for fiction. How do you differentiate between non-fiction and fiction in your own work?

HD: When I submit non-fiction, I excerpt pieces from the novel that are from my life. It’s wrong to make something up and say that it happened to you when it didn’t. But I think it’s fine to write from real experience and call it fiction and not confess which parts actually happened to you. Both are lies about what’s true, but the first kind is a betrayal of trust and perceptions. The second kind is okay because everyone has the right to stand outside of themselves without answering to other people. Anyone can choose to be a writer or a musician or an artist instead of being only the person that things happened to.

E: We’d love another peek into your journal, if you are still keeping one?

HD: You guys are so nice for publishing my super-sad stories and my silly things too. Here’s one:

Dreamed that Pizzaville had a “Halloween Special” where the delivery person runs inside your house and pretends to murder you. I told Lee and Schoo the next morning, “If that becomes real, you have to PROMISE not to order it for me.” Schoo swore that he wouldn’t, but Lee said he’s going to order it for me in HIS dream! So mean!

I like bootcamp and barre but pilates just isn’t as good. The instructor is really tough and she yells at me, which I like, but then at the end of the class she doesn’t tell me how good I am for doing it. The other instructors congratulate everyone for getting through it and they tell us that we should be proud of our strength and our good healthy decisions. But if you don’t tell me I’m good and strong Anita, then what am I supposed to do? Know it inside?

E: When you read do you read with any specific intent? What are you reading right now and why?

I’m addicted to reading. The underlying intent is probably escapism and to relieve anxiety. If I’m researching for the novel, I read about cult mind control, false beliefs and dissociative states. I’m into Michael Persinger’s work on religious hallucinations and magnetic fields. I love autobiographical meta-narrative and everything by Maggie Nelson and Julia Sweeney. I’m also really into Elena Ferrante, Zadie Smith, Walter Scott’s Wendy comics, and this recent piece by Veronica Liu.

E: Thanks so much for taking the time to talk with us. Is there any advice you’d give to our readers who might be preparing to enter EVENT’s Non-Fiction Contest in 2017?

HD: I don’t have any wise words but I transcribed this quote from an interview with Junot Diaz and put it over my desk. I find it very inspiring:

When we create, we’re basically sending out a little map, sending it forward into the future. 95% of the maps disappear, vanish, get destroyed. But some of them are going to make it through. And it’s remarkable what they might do. It’s remarkable, who they might affect. Who they might help. I mean, look, we’re humans, man, we have a long history of screwing everything up and of victimizing each other. But we also have a long history of continuity, you know? Of resistance. And of creative survival. And that’s always been helped tremendously by our arts, by our songs, by the cultural stuff that we pass on from the past to the future. And that’s not a bad thing to be a part of. In a world of many vocations, this seems like not a bad one.

Hilary Dean’s winning essay “On Watch” will appear in EVENT 45/3, to be released this winter. Click HERE to subscribe or renew your subscription.

Issue 48/3 is on its way to your mailbox! Have you

We are pleased to announce our 2019 Non-Fiction Co

Did you know that each issue of EVENT contains han

The time has come! Issue 48/3, our Notes on Writin

Read the full interview at eventmagazine.ca or by

On the EVENT Blog: Community Matters at Growing Ro

This land has history. Art by @cmoshin from EVENT

Struggling through a difficult project? We put tog

Did you miss these great illustrations by @cmoshin

Snow is out and rain is in. What’s your favourit

Bringing it back to these beautiful illustrations

From Linda Crosfield in EVENT 48/2.

Our Holiday Deal is still available! Get two subsc

Issues, interviews, and illustrations galore! Than

Happy Holidays from EVENT! We hope you supported y