Michael V. Smith, My Body Is Yours: An Anatomy of Melancholy Masculinity, Arsenal Pulp, 2015 (reviewed from advance reading copy)

Reviewing a pair of memoirs last year, I praised the genre’s flexibility, its granting of ‘tremendous freedom to explore the myriad facets or nuances of lived experience.’ Reading two more recently, I was struck again by the utility of the form. Elastic, capacious and deeply personal, the memoir has proven an excellent vehicle for Canadian authors exploring a wide assortment of culturally significant topics, from suicide (Miriam Toews’s Swing Low) and familial death (Helen Humphreys’s Nocturne) to depression (Trisha Cull’s The Death of Small Creatures), alcoholism (Jowita Bydlowska’s Drunk Mom) and identity (Rae Spoon and Ivan Coyote’s Gender Failure). The form continues to earn its keep with titles by R.M. Vaughan and Michael V. Smith, whose captivating volumes explore insomnia and queer masculinity, respectively.

Elegant, inquisitive, fretful and now and again archly phrased, Vaughan’s roving Bright Eyed: Insomnia and Its Cultures appears to purposely reflect a few of the insomniac’s traits as described by the author: restless, moody (‘When I have gone days into weeks without proper sleep,’ he writes, ‘I eat, drink, and shit a kind of touchy but distracted, caustic but unfocussed rage that is misunderstood as crankiness’), and prone to short-term enthusiasms.

Built atop readings of Eluned Summers-Bremner’s Insomnia: A Cultural History and Jonathan Crary’s 24/7, the 12 brief chapters of Vaughan’s book confidently highlight the lives of ‘night travellers’ such as himself. Moving beyond his own history to ‘a world that increasingly mirrors [his] life-long problem,’ which is to say ‘a culture that normalizes and privileges the lack of sleep,’ he gives readers ample reasons to be concerned about the looming future.

Vaughan begins with a disturbing portrait of himself, age 10, already ‘at war’ with sleep; he was ‘convinced that [his] insomnia was a sign that [he] was cursed.’ He’s stylish but succinct as he covers many arduous years as a ‘night person’ who tried to convince himself of the superiority of his moon-lit routine. Even in his 40s, he says, he ‘took great pride in being one of the party gays who didn’t arrive at the clubs until after midnight.’ Normalizing the condition is a way of coping.

Referring to data that chart just how frequent problems with sleep have become (40 per cent of Canadians and Americans face them, as well as over 60 per cent of Brazilians), Vaughan observes that insomnia culture has grown and fortified itself in the decades since he ‘took some sort of drug every day from the age of 13 to 24. Every day,’ in order to secure sleep (or to be amused during long nights of sleeplessness).

Research and experience lead him to conclude that a capitalism-sanctioned and occupationally encouraged ‘world of wide awake, hyper-connected people’ is dawning; and in his view the insomniac’s qualities—passivity, apathy and distractedness—are the impending par for the course. ‘We are not all turning into zombies,’ he states, ‘we’re turning into hummingbirds—creatures that die if they stop moving.’ His diagnosis is more than a little disturbing. It offers a dystopian picture of all work, all activity, all the time, aided by ‘medications’ that suppress our need for sleep and emergent norms that demonize it. Fifteen years after a sleep clinic session, he writes, ‘here I remain; chronically under-slept, addicted to Clonazepam (which really no longer works, but which is a pure hell to quit), perpetually raccoon eyed and chubby.’ His actual last words—‘Maybe the demons will float away, find viler bodies to overrun. Maybe, one night, I will kick myself free’—do little to convince us that his own insomnia, and eventually worldwide insomnia, are likely to change course. 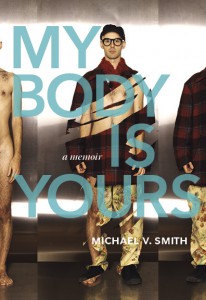 Tonally diverse (analytic, heartfelt, epigrammatic, anecdotal) but always incisive, Smith’s My Body is Yours peers inward while also firmly placing within a broad societal context the 40-something author’s lifelong quest to overcome a ‘debilitating shame’ for his body and create a comfortable and positive ‘relationship to masculinity.’ ‘If we’re paying attention,’ he states, ‘we can see how the shorthands we’ve used to label genders and sexualities are about as articulate as playing charades with your hands tied together, in the dark.’

Interestingly, Smith mentions a ‘shadow’ book, with his alcoholic deceased father at least partially in its crosshairs: ‘The book I wanted to write was an angry finger-wag at the world, telling most men how to behave, showing them how to live by counterexample, and offering a whole lot of advice and judgment about what fuckups they have been.’ Still, while the revised project is peppered with angry finger-wags (at uncritical men, straight as well as gay), the narrative is now suffused with the spirits of revelation and inquiry.

Revelation comes in the form of the proverbial man behind the mask. The savvy, ambitious public face displays the poet, novelist and creator of film-festival shorts who obtained a graduate degree and later worked in a bookstore and, at last, academia. There’s also another guy, a Hyde-ish self, seething and furious and appetite-driven. Beneath the amusing and sometimes crowd-pleasing clownish performer, the ‘femme-bully disguise,’ and the ‘mouthy, assertive smart-ass’ lurk, of course, pain and uncertainty.

Smith’s recollection of what can be politely called ‘amorous pursuits’ melds the quippy and light with the manic and out-of-control. These moments of candour appear on every page: he describes himself before he stopped drinking as ‘a charming mix of aggressive, drunk, and sissy,’ and notes, ‘Everyone had funny drunk stories. I was competitive so mine just happened to be better’; or, summarizing his extraordinary sexual history, he states, ‘I’ve given or taken a dick in either an upper or lower hole with more than a couple thousand men. I think. I stopped counting when I reached around 1,500. It’s all hubris after that.’

His ‘desperate, confused, enraged, and terrified’ teenage years in Ontario were built from a fey demeanor, acute and literally painful acne, a skinny body, and a family life that was anything but nurturing. He was, he writes, ‘a poor excuse for a man by the measures of masculinity in my small town’ and the victim of a debilitating body shame. His ‘acting out’ (to slap a simple label on a complex psychological phenomenon) in Toronto, Vancouver and Kelowna might have aimed at ‘becoming [his] own kind of genderqueer,’ but it often featured sleepless nights (outdoors or behind a computer screen) cruising for sex, finding it, and going back for more.

These often reckless, drug-saturated episodes fill many pages of the memoir, but of particular interest are his reflections about masculinity (both its constructed nature and that mainstream model’s difficult-to-outfox omnipresence) and, not unrelated, his difficult and painful relationship with his father, whose own history was anything but easy and assured.

Like Vaughan, Smith readily poses questions about the way our society works—or fails to—while providing food for thought for anyone interested in the salient material: how (possibly) to find contentment, how (possibly) to better navigate through a world whose forces can be so unbending and oppressive, and (certainly) generating ideas that can equip all of us with means to make our home more habitable.