Carol Shaben, Into the Abyss: How a Deadly Plane Crash Changed the Lives of a Pilot, a Politician, a Criminal and a Cop (Random House Canada, 2012) 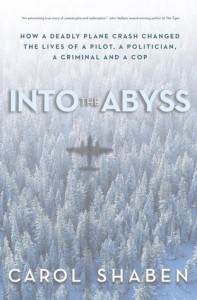 In Survival, her influential study of Canadian literature, Margaret Atwood sees in much of Canadian fiction a struggle against an uncaring hinterland that its hero must conquer. Faced with the otherness ‘ that lies beyond the frontier,’ the Canadian hero engages in the process of ‘ winning over nature and enhancing his own stature.’ While many see Atwood’s treatment of her national literature as past its expiration date, two recent Canadian non-fiction titles, Carol Shaben’s Into the Abyss and Jay Ruzesky’s In Antarctica, take on the trope of the human struggle against nature in earnest.

When Shaben was a 22-year-old journalist living in Jerusalem, a note in a local paper caught her eye: In October, 1984, a small commercial plane carrying nine passengers had crashed in the frozen wilderness of northern Alberta. Among the passengers was Shaben’s own father, Larry. Decades later, Shaben chronicles the crash and its aftermath in Into the Abyss. Though occasionally introducing secondary characters, she focuses primarily on the crash’s four survivors. Early on we meet Eric Vogel, a young pilot, and learn how desperately he tries to please his superiors at Wapiti Aeronautics. Larry Shaben is an Alberta-based politician and one of Wapiti’s political supporters. Scott Deschamps, an RCMP officer trying to keep his marriage afloat, and Paul Archambault, drifter, criminal, teller of jokes and tall tales, round out Shaben’s cast.

Equally at home describing the mechanical failures of Vogel’s Piper Navajo and the intricacies of losing situational awareness in the wake of trauma, Shaben is a versatile and, at times, entertaining guide. Part investigative journalism, part thriller, Into the Abyss comes with a made-for-Hollywood logline: ‘How a Deadly Plane Crash Changed the Lives of a Pilot, a Politician, a Criminal and a Cop.’ The title entices for two reasons: it uses recognizable high-concept archetypes and suggests the possibility of these disparate archetypes in conflict with one another.

However, none of the implied conflicts materializes. Our criminal, Paul, is clearly the most capable of the four, ensuring that the remaining three live long enough for rescue. The largely incapacitated Shaben and Deschamps contribute observations and not much else, while Vogel works the crash over in his mind until he is crippled by guilt. Aside from a few jibes and muted protests focusing on the distribution of cigarettes among the survivors, the four evolve into a peaceful, if awkward, community that falls short of the conflict the book’s premise implies. Moreover, since the actual plane crash and struggle to survive comprise less than half the book, the narrative feels lopsided. In many respects, the aftermath of the crash proves far more compelling than the event itself. Archambault’s redemption as hero, however short lived, and the fall of Vogel, the goodhearted pilot cast as Wapiti’s scapegoat, are the stuff of Greek tragedy.

More than anything, Into the Abyss chronicles institutional failure. Several of Wapiti’s planes had been grounded after the company ‘failed to conduct the mandatory airworthiness inspections.’ Even Wapiti’s most experienced pilots concede that Vogel’s flight may have been ill-advised: ‘Though supremely experienced at flying in difficult conditions and intimately familiar with the area, even [the pilot] couldn’t argue with [that night’s] weather.’ The legal battle making up the middle of the book holds interest because the conflict is clear: Will Wapiti be taken to task for its irresponsibility, or will Vogel bear the burden of the crash on his own?

The trial’s suspense does not last long, giving way to a patchwork of digressions Shaben admirably tries to stitch together. One cannot help but wonder, for example, why we return time and again to Scott’s marriage, in trouble from the book’s opening pages, or how Larry’s life as a Muslim in the wake of September 11 fits into a narrative about a plane crash in rural Alberta. Therein lies the greatest weakness of Into the Abyss: It just does not contain enough material to constitute a book. Whenever the narrative falters, Shaben turns to ephemera and diversions that, however interesting, seem like padding.

Despite its shortcomings, the book does have appeal. Vogel’s journey to redemption, Archambault’s struggle with life as a hero, and the eventual comeuppance of Wapiti offer moments of satisfaction. Shaben’s characters are beautifully explored, and she chronicles an important, oft-overlooked moment in transportation legislation. Into the Abyss establishes its author as an exceptional stylist and a wonderful researcher. One can only hope that her sophomore effort features material robust enough to match her talents. 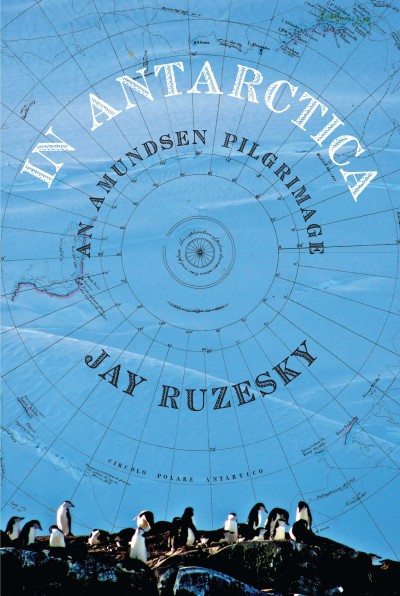 While Shaben’s relationship to her subject quietly underscores Into the Abyss, Jay Ruzesky’s explicitly mines his filial relationship to Roald Amundsen, his Norwegian cousin (twice-removed), the first ex- plorer to successfully make it through the Antarctic and live to tell the tale. In 2011, on the 100th anniversary of Amundsen’s journey, Ruzesky finds himself compelled by a strange intergenerational voodoo of the blood to make his own trip to the South Pole. In terms of narrative, In Antarctica has the bobbing quality of an iceberg, moving in and out of the present. Most of the drama proper belongs to Ruzesky’s biography of Amundsen, while the author’s journey is a more contemplative, meditative quest. The result — a hybrid of biography, memoir, travelogue — is uniquely self-buttressing, with one section patching up the weaknesses of the other.

The biography of Amundsen practically writes itself. In fact, Amundsen himself is responsible for a book-length memoir documenting his own Antarctic adventures. Ruzesky’s eye for isolating what matters in his primary source material gives the Amundsen sections a compelling immediacy. A quick flip to the appendix shows that Ruzesky had an imposing amount of primary source material to parse, but In Antarctica never comes off as plodding or stitched together.

In terms of character, Ruzesky’s Amundsen simultaneously entices and repels. His self-discipline and efficiency contrast those of Robert Falcon Scott, Amundsen’s chief rival who famously botched his attempts to breach Antarctica, and make him something of a hero, an eccentric leader willing to sacrifice anything to reach the ends of the earth. On the other hand, his fanatical pursuit of fame and new terrain bears more than a passing resemblance to the maniacal narcissism of Kurtz, the psychopath at the heart of Joseph Conrad’s Heart of Darkness. While Kurtz cruelly lords over ivory in an Africa of his own making, Amundsen ruthlessly slaughters his overworked dogs. After feeding the meat to his crew, he comments blithely, ‘I would admit that the steaks would have lost nothing by being a little more tender, but one must not expect too much of a dog.’

If Amundsen’s neurotic intensity is almost Kurtz-like, Ruzesky casts himself as a kind of Marlowe — endearingly earnest and ill- prepared — in In Antarctica’s concurrent narrative, set in the present and focusing on Ruzesky’s life on board a research vessel bound for the South Pole. Here Ruzesky impresses most. His polar adventure might lack the glitz of Amundsen’s, but he makes up for that shortcoming with a delicate exploration of his own psychology.

Ruzesky’s side of the narrative works in part because of the affable tone he adopts. Aware that his journey pales in comparison to Amundsen’s, he admits that Amundsen ‘ spent years planning, raising funds, struggling to make his own dreams come true…. I have a line of credit but much less debt, in relative terms, than he did when he set sail from Norway.’ After noting that Amundsen’s chief rival, R.F. Scott, is more famous chiefly because of how thoroughly he failed his race to the Pole, Ruzesky points out that his brother, who accompanies him on the trip, is also named Scott. The Ruzesky brothers charmingly play off one another and the crew, an understandably eccentric group who develop a cohesiveness reminiscent of Shaben’s survivors. 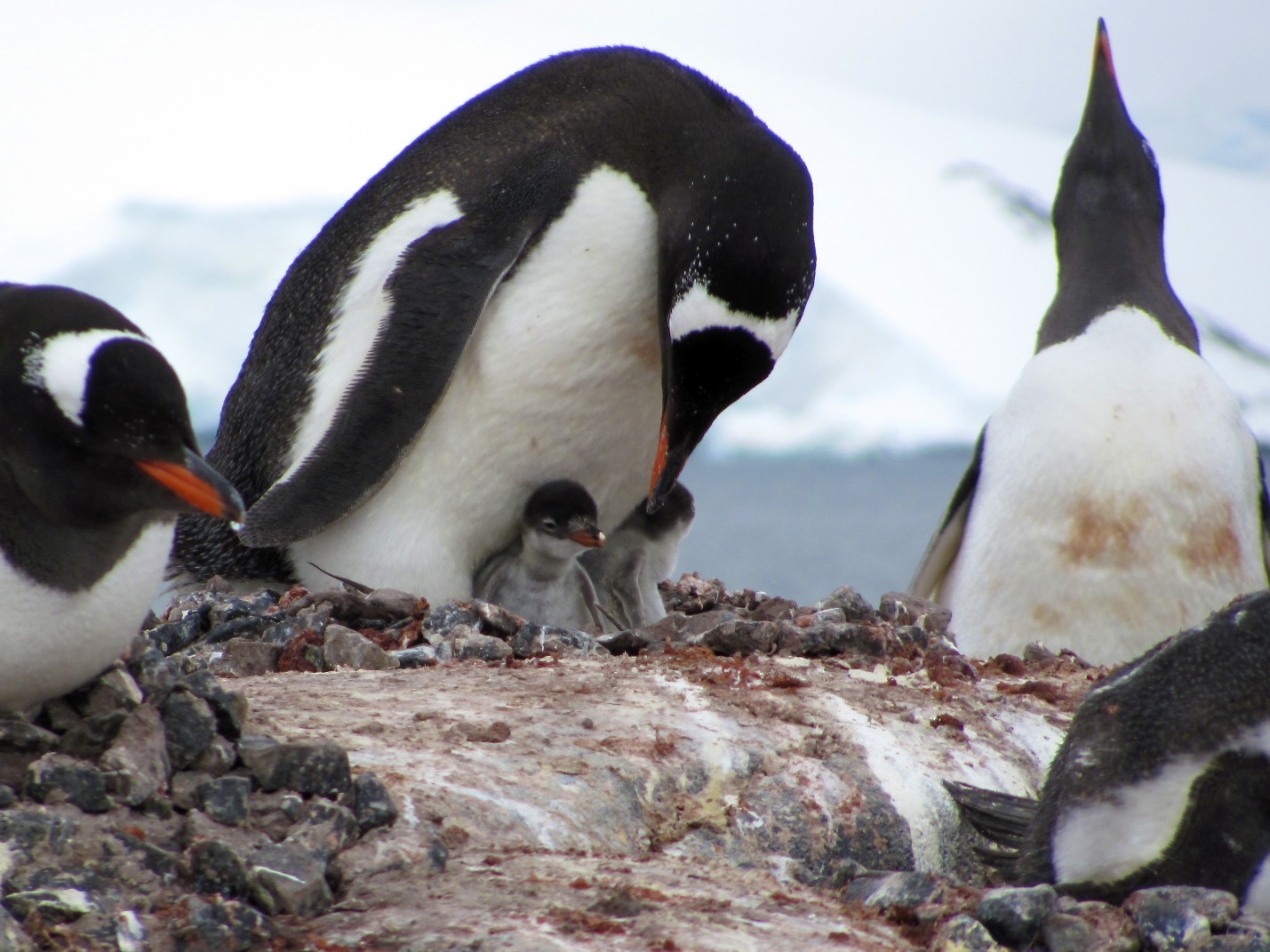 A shot from Ruzesky. Until this point, the EVENT blog suffered a criminal dearth of baby penguins.

Effective travelogues justify their own existence by dramatically transporting their readers to uniquely foreign geographies. On this level, Ruzesky succeeds with aplomb. Some of his most poignant observations transport the rituals of normal life on land to the sublime hinterland that surrounds the ship. In a memorable later chapter, Christmas Day accrues its own particular surrealism when Ruzesky sees what he reckons might be a ghost in the water’s reflection. Small gifts are doled out. Ruzesky packs a dress jacket, ‘a useless extravagance,’ that he dons for the occasion. He notes that ‘Fancy clothes aren’t necessary in Antarctica, but photos of both Amundsen’s and Scott’s men show them in formal dress when they mustered for events.’ Just as Conrad’s Marlowe struggles to stay civilized in his fictional journey into the heart of the Congo, so too does Ruzesky find himself nearly overwhelmed by the Antarctic, a place that literally shifts as much as a kilometre a day, ‘ so even if you reach the Pole, you know you won’t be there for long.’ An impressive group of high quality photographs, both archival and from Ruzesky’s own collection, pepper the text and emphasize the Antarctic’s ineffable vastness.

Ruzesky cannot help but meditate on the spiritual nature of his quest. Evidently, those who came before him had similar inclinations. A Russian church made of Siberian pine has been constructed on a hill above the Bellingshausen research station, and in a statement echoing Judeo-Christian grief at the loss of Eden, Ruzesky observes, ‘Here is the world before we messed it up.’ The crew even performs a kind of baptism, plunging into the freezing Antarctic water.

In the journal’s closing moments, Ruzesky connects his two narrative strands and repeats what we already know about his famous cousin. An aging Amundsen became bitter and poor late in life, and the author cannot help but judge his ancestor for his fanaticism and the cruel slaughter of his dogs. Still, the magic of In Antarctica: An Amundsen Pilgrimage is Ruzesky’s ability to create a family that connects one of history’s most daring and complicated explorers to Ruzesky himself and, in turn, to his readers.