This review originally appeared in EVENT 42/2.

When reviewing an illustrated collection by a poet who also happens to be an incredible visual artist, one is tempted to look to the illustrations in order to make associative connections with the poems. The drawings in Jessica Hiemstra’s second collection, Self-Portrait Without a Bicycle, are storm clouds of manic, swirling, charcoal black: lines wrought out of, or overtop of, a central image—a crow, a canoe, two dahlias, a pregnant belly full of strawberries, a woman down on her shoulders, hands pressed on her raised hips, pedalling toward the sky.

The sections of the book are divided not just by these illustrations, but also by months: October through March. During this period a cat dies, the speaker’s Oma passes, her sister’s daughter dies stillborn, and the speaker discovers her own pregnancy. The poems themselves—free-verse stanzas whose titles are almost always composed of subject and verb, and whose sentences often overlap with the first lines of subsequent sections—dart in and out of these narratives. There are numerous sidebars of scientific curio, discourse on specific artists and musicians, and other debris of the curious psyche. The whole collection has a sketchbook feel. In an earlier essay on her poem ‘Browsing Frog and Toad Together,’ Hiemstra describes the experience of finishing a poem as a state of ‘knowing that the moment thought is trapped by words, something is smithereens.’ The opened-door inclusiveness of these poems would then appear to seek a way out of that trap through hurried swerves in subject.

A few things work against this motion, as in the following passage about a cat:

but she died in combat, fought a raccoon. Dad found her,
disembowelled. She expired purring in his lap
with a bowl of milk, intestines askew, swaddled tightly
in a blanket.

The first line is a platitude of the sort that could easily be removed with a more judicious edit. Verbs and verbals clutter the first three lines. ‘[E]xpired’ seems employed for no reason; we already have some variation of ‘to die’ twice before. The bowl of milk is gratuitous. ‘Swaddled’ already connotes the tightness of ‘tightly.’ Sharpening this sort of passage to the essential details, removing scene-moving lines throughout the book (such as, ‘And then details:’) in favour of quicker jump cuts and, finally, reining in the mid-poem expository passages (‘It was minute/but changed the world’) would all serve to make the energy of her observational mode more palpable.

Hiemstra’s poems are strongest when the narrative stakes are highest. ‘The most beautiful things I’ve seen in October’ is a long rumination on a canoe trip with a father who later abandons the family. Hiemstra paddles out to the edges of civilization, observes a moose through the triangle of her father’s arm, then moves the poem in the direction of an apparently unrelated bear attack. Both diversions are a tender and convincing means of understanding love amid cruel nature. Certain sections of ‘A bowl of strawberries in an empty room’ vividly capture a stillborn child’s funeral. In the first passage the speaker leans over to observe her small, dead niece, her eyes darting from the child’s tuque to the child’s face, her mind recalling a passage from Plutarch. Then ‘a tiny heart—that sparrow, Rachel’s thumb/clutched by a small pink hand…’ The quickness here is what keeps the world afloat, staves off utter despair. 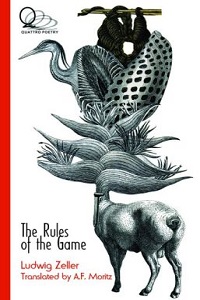 Ludwig Zeller’s The Rules of the Game is an all-too-rare gift in Canadian publishing: a generous selection of poems in translation from a foreign-born, world-class artist with significant but brief ties to Canada. Poet A.F. Moritz has been translating these poems over four decades. In his introduction, he situates Zeller’s career across multiple traditions, including surrealist and German romantic. Moritz provides a detailed account of Zeller’s early life in Chile, his career as a budding collage artist and curator, his frustration over the political climate that led to his self-imposed exile to Toronto in the early seventies, the move to his current home Oaxaca, and the responses to his work both here and abroad—oscillating from neglect to fame as ‘the last surrealist.’ Moritz and Quattro Books deserve thanks for reintroducing us to the poems of someone who merits our attention.

On all fours I crawl along a knife-edge, turn back
And am a lizard, a quaternary animal; I cover myself in furs,
My scales creak: metal tears creasing each pane in the doorless
Hall of mirrors where someone is burning the days, root and branch.

Multiple textures, anthropomorphism, a mirror reflecting back the image of the self in situ, human transience in the face of the elements—reading Zeller often feels like being immersed in an impulsive physical act, an ontology that never quite finds its form. Removing oneself from this sort of chaotic immersion is a difficult (and perhaps inherently dissatisfying) experience. Zeller’s poems will often end with a baptismal wash of rain or blood, with a dreamer opening his or her eyes, with a renunciation of some intended desire, or with a whiff of perfume or smoke.

Later in the book a clearer split appears between poems of a scissoring force and poems of a wise, shrugging tenderness. (Moritz describes what he perceives as Zeller’s ‘third phase’ in some detail toward the end of his introduction.) ‘A Bunch of Carnations’ stands out as a kind of reprieve from the maelstrom—a clarity made more convincing in the context of the psychic violence endured throughout the book:

I can’t say exactly why I wrote these lines
About the flowers of letters, the calligrams, which follow me
Down my long life and keep lighting the signs that love
And friendship do exist, that I believe. But here they are.
Maybe you’ll enjoy them—maybe you need them, like me.

I do, and am grateful for having been introduced to this poet. 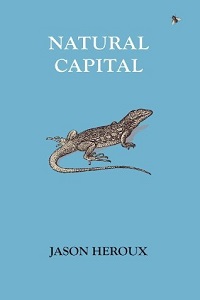 Jason Heroux’s skill as an image-maker recalls Tomas Tranströmer. In reviewing Heroux’s Natural Capital, I recall this quote from Tranströmer about what he perceives as ‘the fundamental situation of poetry’: ‘The lesson of official life goes rumbling on. We send inspired notes to one another.’ Heroux seems incapable of writing an uninspired poem. Almost every poem in this book contains some sort of mind-bending metaphor, as in these lines:

Nothing is sadder than the smudged sun wiping its face
with the sky’s rag, or a number divided by a lesser number,
or your quiet voice walking barefoot through death’s sand.

Heroux provides gleeful, inventive scenarios throughout: shoes that renounce their being worn, a speaker waiting excitedly at a bus stop for the day he is going to be born, another speaker who keeps stones as pets when his birds fly away, then treats the birds like stones when they return. In an ideal world, Heroux’s poems would be doled out monthly, one at a time. They would be slotted into the mailbox, or handed to us by some peculiar stranger on the sidewalk.

Reading poem after poem, side by side, one loses some of the surprise and excitement, as certain tricks become repetitive. This repetition can come in the form of images. ‘Notes Found Written on a Wall-Sized Napkin’ ends with the gorgeous lines, ‘When we die we’ll stop/like combs caught in the luxurious knots/of long tangled hair.’ Yet not four pages later, ‘Long Weekend’ finishes with the eerily similar ‘Even when we finally end/we’ll continue like a road with no one on it.’ Both images portray human life as an end that is not really an end. Repeated images start to argue with one another: Do you prefer ‘A homeless wind/[pushing] a small/grey cloud like/a wobbly shopping cart/through the darkening sky?’ or clouds that ‘drift overhead/like eighty-year-old ballerinas crossing the street’? Both are perverse and exceptional. Is it silly to desire that they appear books apart rather than pages? Maybe.

Adjectives like ‘small’ and ‘gentle’ can be overused to the point of preciousness. Joy, puddles, sunshine, receipts and other bits of paper also make enough appearances to threaten to dilute each other’s presence. But then Heroux will capture some subtle, universally relatable condition in the barest language:

A crushed can, two rats, and I
all applied for the job.
One of the rats got it.
Tired world, sleep well.

As a book reviewer, I just want to get out of his way and allow him to continue to unself-consciously do whatever it is he needs to do in order to give us the world in this manner.