This review first appeared in EVENT 42/2

As an avid reader of mysteries—often the dark and thrilling kind—I sometimes experience a burbling of unease: What is this fascination with murder, mayhem and the darkness of the human soul that so draws the mystery fan? Beyond considering quasi-Aristotelian explanations to do with the potential value of catharsis, I really haven’t come up with any profound answers. But I do think that, murder and mayhem aside, mysteries are, in some ways, the quintessential narrative. After all, regardless of genre, narrative is driven by the desire for revelation—we are propelled by our wish not only to discover what happens but also to understand how we end up where we do, and to have all the pieces fall into place. The mystery novel explicitly packages these narrative desires. 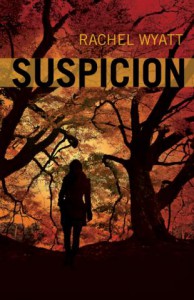 Rachel Wyatt’s Suspicion is not a conventional mystery. While it offers some polite Canadian mayhem, it features no murder, and most of the mystery concerns those within the narrative, not the reader, who for the most part (with the exception of a couple of final, satisfying surprises) is more in-the-know than the characters. But the novel’s title is at the heart of its central theme and ultimately points to the psychological cornerstone of the genre: Mysteries pull us into the experience of suspicion with all of its angsty, paranoid permutations and allow us to emerge with a sense of clarity and order somewhat restored. Wyatt’s novel does not offer this catharsis as much to the reader as to the characters themselves: We travel with them as they descend into the depths of suspicion and the personal and communal havoc it wreaks.

Set in Ghills Lake, a fictional British Columbian town significantly located ‘on the edge of the Interior,’ the novel begins with the disappearance of Candace Wilson. Her husband is embroiled in a public relations fiasco around a new development he is building on the town’s treasured lakefront. Suspicions arise out of such mundane and recognizable conflict. In fact, readers know that Candace has fallen—or possibly was pushed—into a sinkhole near the construction site, where for several days she languishes, sucking pebbles and contemplating in an increasingly dream-like, fragmented fashion the nature of her life and loves. She had begun this process just before she plummeted: With an unexpected free day at her disposal, she wandered down to the lakeside, sat on a park bench, ‘got a pen and a scrap of paper from her bag and began to make a list. At the top she wrote LIFE.’ She has recently ended an affair—itself the stuff of suspicion, though ironically known by many—and she wants a new start, including a simple, more comfortable foundation in the form of a new couch.

Nothing about this sinkhole is overly subtle; as a symbol for the novel’s existential explorations, it is fairly obvious but nonetheless effective. While Candace literally descends into a cold, dark place, those around her do so metaphorically as they confront the mystery of her disappearance until ‘the air, the whole atmosphere in the town was full of words and thoughts and suspicion.’ Because of its multiple viewpoints, the novel allows us to sink into this atmosphere with each of the key characters. We shift from one perspective to another, moving from the disoriented and increasingly frantic speculations of Jack, Candace’s husband; to those of her more staid, reflective father Marcus; her jealous sister Erica; and her mild, artist brother-in-law Simon, whose paintings—filled as they are with red-tinged images of violence—prompt more than one character to wonder if Simon is as gentle-hearted as he appears. And periodically we read the online chat of Verlyn/Marguerite, a wheelchair-bound woman who seems to know something of Candace’s disappearance, but is trapped in a bitter void of her own. So the suspicions flare and tangle. Suspicion, Wyatt shows us, is born of our inability to truly know the other, of things both spoken and unspoken, known and remembered, and unknown or forgotten, and it fosters and thrives on misunderstanding and cruelty. Yet, as both Candace and Jack realize, while we are inevitably each alone, our fumbling connections to one another are key to survival. Without the sustaining, even if sometimes tenuous, bonds we form, we risk our own disappearance. Jack recognizes this when he observes that his wife’s ‘absence was his absence. Neither of them was here. She had taken his life with her, wherever she was.’ This is the glimmer of grace set against the darkness of suspicion and disconnection, as Candace poignantly realizes. Languishing below ground, she finds solace in anticipating coffee, a shower and ‘Kindness. There would be kindness.’

The novel is rich with images that cast gentle light on its themes: Candace and her sister Erica share the memory of a teddy bear dismembered by their mother, a haunting emblem of their dysfunctional childhood, while their widowed father negotiates his memories of ‘SHE’ by rebelliously gluing his collection of pub coasters into patterns on his living-room wall. And we are always aware of the stalled construction site with its half-finished foundations, homes that are not yet homes, representative not only of the community’s fracturing but also of each character’s struggle to somehow make sense of the ‘LIFE’ list. From the insidious to the humorous, the tragic to the mundane, Suspicion is a compelling investigation into the weird mixed bag of ordinary human life. 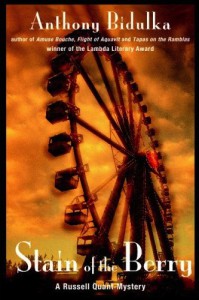 A rerelease of the fourth novel in Anthony Bidulka’s Russell Quant series, Stain of the Berry is a contemporary rendition of the hard-boiled private-eye novel, with a quirky first-person point of view akin to that of Sue Grafton’s Kinsey Milhone or Sara Peretsky’s V.I. Warshawski. Russell Quant is not as hard-boiled as either Milhone or Warshawski, however; he’s a rather endearing, sensitive, witty and somewhat self-deprecating former cop turned PI, whose self-introduction perfectly encapsulates his tone:

My cases have run the gamut from The Case of the Stolen Perogy Recipe to murder—with emphasis on the perogy side of the scale. And lately, business had been bad. My resume of recent cases was looking pretty sparse and my bank account even more so. I had reached a point where I’d begun to think I’d never work again and would have to sell the family jewels—which consist of a green-tinged, silver ID bracelet from my first high school boyfriend (well, I pretended he was my boyfriend) and a pair of cufflinks (one broken) that had belonged to my late father…

Set in Saskatoon (hence the case of the perogies), the novel is replete with prairie atmosphere, includes forays to Vancouver’s West End and the Canadian Arctic, and is populated by a diverse, often eccentric but believable cast of characters. While this is a more traditional mystery than Suspicion, it is not entirely clear whether there has been a murder. A woman is dead, apparently by suicide, and her family asks Russell to investigate her death—to discover, at least, why she might have killed herself, if indeed she did. As he begins to look into her final days, Russell stumbles onto the trail of the ‘Boogeyman’—an elusive figure who seems to have haunted and tormented numerous members of an LGBT choir known as the ‘Pink Gophers.’ It turns out that more than one Pink Gopher has died in mysterious circumstances, so Russell is thrown into a web of suspicion, deceit and violence as he attempts to locate and interview the remaining Gophers, all of whom fear the Boogeyman. It sounds silly, and it has its silly moments, but the plot works on a serious enough investigative level to make it a worthy mystery ride. And as with all successful mysteries, enough turns, misdirections and false leads keep us guessing and engaged.

Alongside the mystery Russell’s story unfolds—as is common in this sort of series, he navigates a mystery of his own, to do with the disappearance of a close friend, his dead father and a mysterious (but handsome and charismatic) stranger who almost literally sweeps poor enamoured Russell off his feet. In his private life Russell is single but hopeful, and in the meantime, he is kept warm at night by the loyal presence of Barbra and Brutus, his beloved ‘mutts.’

As in Wyatt’s novel, a key theme centres not only on the destructive forces of suspicion and fear but also on the redemptive capacity of human connections, of simple friendship and love. Part of the appeal of both Russell’s character and the novel is the evocation of human vulnerability and longing—the desire for and need of connection that sustains, and the ways in which the social world so often fractures and damages this potential. This exploration is particularly provocative when Bidulka explores the ramifications of othering within a community that is itself so often defined as other. He gives us a full-spectrum portrayal of a group that is still frequently typecast—LGBT characters in the novel are both victims and perpetrators, good guys and villains (that is, complexly human)—while implicitly exploring the ramifications of homophobia within the queer community itself. As the plot unfolds and the characters develop, we are shown that authenticity and agency are necessary to a healthy sense of self, regardless of sexual identity, and that perversity is a consequence of self-loathing and the thwarting of healthy desire. Through Russell, Bidulka evokes empathy for those who are thus thwarted, sketching an almost cautionary moral about the ways prejudice, hatred and cruelty become the impetus for vengeance and retribution. It may be that the real boogeymen are the cultural fears and prejudices that continue to stain the lives of those who live and love outside the sanctioned norm.

The novel’s moral framework is not didactic in its delivery: The rather serious themes involving prejudice, fear, retribution and the possibilities of redemption emerge through the often campy good humour of Russell’s voice as he shares his quirky adventures. While a light-ish mystery, seriously good fun as opposed to dark or thrilling (despite a few rather thrilling moments), Stain of the Berry is not without thoughtful nuance, and I look forward to delving further into the investigative romps of Russell Quant.