In The Forbidden Purple City, (Goose Lane Editions, 2019) debut author Philip Huynh dives headfirst into the Vietnamese diaspora. In these beautifully crafted stories, crystalline in their clarity and immersive in their intensity, he creates a universe inhabited by the deprivations of war, the reinvention of self in a new and unfamiliar settings, and the tensions between old-world parents and new-world children. Rooted in history and tradition yet startlingly contemporary in their approach, Huynh‘s stories are sensuously evocative, plunging us into worlds so all-encompassing that we can smell the scent of orange blossoms and hear the rumble of bass lines from suburban car stereos. What follows is an interview with the author about his inspiration, short fiction as a genre, finding one’s voice for a story and more.

Why is this book called The Forbidden Purple City?

Philip Huynh: Oh, for so many reasons, but I’ll tell you a couple. T 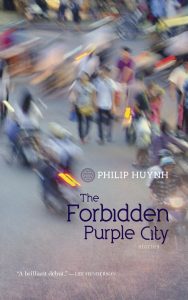 he Forbidden Purple City was the Vietnamese emperors’ home and inner sanctum for generations. It was likely the most exquisite piece of real estate in the country, and yet I don’t believe a single picture has been found of the palace interiors. No one really knows what it looked like. It is, ultimately, a place situated only in the imagination. The actual locale has been made over by UNESCO and other modern bureaucrats to suit their pre-conceptions of the past, whether or not those pre-conceptions are founded in any reality. For me, the Forbidden Purple City is an analogy of any immigrant’s lost homeland – one that is constantly remade by memory and imagination because of its absence. But I also see the Forbidden Purple City in the places that the immigrants eventually arrive at – these places that are made home also by virtue of the imagination, dream destinations embellished by fantasy no matter how unwelcoming the realities are. For the immigrants in my stories, the Forbidden Purple City represents not only the gilded memories of a Vietnam they came from, but the fantasy of a place of refuge like Vancouver.

Authors are asked often if their books are inspired by true events. Can you tell us if there were specific circumstances which inspired each of your stories in The Forbidden Purple City?

PH: Of course, my own biography may have inspired the settings and, at least superficially, some of the scenarios in my fiction. I grew up in East Vancouver, and heard rumours of the sorts of “under-the-table” goings-ons that are depicted in a few of my stories. I also went to a private school in Winnipeg on a bursary and knew kids there who were bullied, which is the subject matter of “The Tale of Jude.” I’ve practiced law in New York City and was evacuated out of my apartment on 9/11, an experience I alluded to in “Turkey Day.”

The seed of my stories, though, are the relationships between characters, and each story explores a set of human dynamics that are for the most part very different from those in my own life. For example, in “The Investment on Dumfries Street,” I wanted to explore a father and son who lived together in extremely close quarters. They have only each other in this world, and the father used the son as his confident, yet at the end of it all he remains to the son a complete mystery. I myself come from a large household and have three siblings. Another example is “Gulliver’s Wife,” where I wanted to explore a misunderstood love triangle though I’ve never been involved in such a thing (at least that I can recall!).

There are a couple of stories, though, which I can trace to an instigating moment. I remember visiting the imperial tombs of Hue, and either hearing the dan bau or another Vietnamese instrument on the radio or in my head as I arrived at the site. That was the beginning of “The Forbidden Purple City.” I also remember visiting the abalone divers on Jeju Island (my in-laws live in Korea), and wondering who as an outsider would ever be able to join such a world. That thought became “The Abalone Diver.”

Have you ever wanted to take one of these short stories and turn it into something longer? Which one would you choose to do so if you could?

PH: I think the answer to this is none and all. None because I had written each piece as a self-contained story rather than as a chapter. I also wrote them over the course of many years and had to develop a particular sensibility or mindset to enter the world of each one, and it would be difficult to re-enter them at this point. Yet I do wonder sometimes how my characters have fared beyond the final note that was struck.

One is the narrator in “Toad Poem.” In the story he has just arrived in Hoi An, a place he lived in as a young man before escaping the war to Canada. The story ends with him still in mid-journey, driving off to his parents’ village, with a bit of his retirement savings to spare. I do wonder how his trip back to Vietnam turned out. 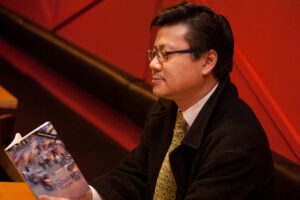 The Tale of Kieu is mentioned in a couple of the stories. What does it mean to you?

PH: The Tale of Kieu is Vietnam’s single most important piece of literature, an epic poem written in the nineteenth century about a woman who unwittingly sells herself into prostitution in order to save her family. There are those who say that the title character stands in for Vietnam itself – a soulful and benevolent land passed roughly from one conqueror to the next.

So it is difficult to lay claim to an interest in Vietnamese culture without reckoning, in some way, with this text. Jude, in my story “The Tale of Jude,” even wields the poem as some sort of filter to determine her friend’s authenticity as Vietnamese.

Though it is the country’s most popular poem, with beautiful imagery and a cinematic storyline, it contains depths of Confucian and Buddhist thought, and allusions to Chinese myth and history, that are not readily appreciable (at least to me). A character in “The Forbidden City” sings lines from it like it is the latest pop tune, yet the lines themselves speak to suffering and karmic retribution. The depth of this epic is what makes it enduring.

The narrative voices differ from old man to middle-aged woman. Was there an intended audience for this book?

PH: I don’t have a clear vision of who my intended reader is, other than someone with an open-minded literary sensibility. If you are reading this, then you’re likely the one that I am writing for! I wonder if not trying to see too clearly who my audience is has given me some courage to depict lives quite different from my own. Certainly the through-line with most of my characters is their Vietnamese background, which I share. I do believe that although my background is the prism through which I see the world, my stories hopefully touch upon themes of more universal concern. In the end, I’d prefer that my stories share an emotional rather than demographic resonance with readers.

One of the characters wants to write a poem, a toad poem, in commemoration of his parents. Are these types of poems common?

PH: Although there is a well-known folk tale in Vietnam called “Toad Poetry,” the idea of commemorating one’s parents with such a poem is a complete invention of the narrator’s.

The folk tale is retold (in modified form) in my short story. It is about some fools at an inn who cobble together a bunch of verses about a toad jumping into a hole. That’s literally the whole thing. The poem is patently asinine, yet the fools act so impressed by their own perceived genius that they suddenly fear the heavens will strike them down in jealousy. There is a wink and nod in this tale about artists whose creations don’t quite live up to their overweening ambitions. I think that in Vietnam, writing a “toad poem” actually means you are writing something really sub-par.

Our narrator knows the significance of the folk story, and describes his own attempt to immortalize his parents in verse as writing a “toad poem.” I think he describes it this way not because he is insincere about his desire to honour his parents, but rather because he tacitly recognizes that he is not up to such a great task. He suspects that he is just another fool at the inn.

How much research did you need to do for the stories in this book, and how much did you know from being taught the information growing up?

PH: The stories are generally set in North America (in Vancouver, Winnipeg, and New York) and Asia (Hue, Hoi An, Jeju Island). I was born in Vancouver and have lived in North America all my life, growing up in East Vancouver (the setting of several stories), going to a private school in Winnipeg (“The Tale of Jude”), and practicing law in New York City (“Turkey Day”). I’ve only visited the settings in Asia, which might explain why those stories are told from an outsider’s perspective.

For example, “The Forbidden Purple City” is told from the viewpoint of a Vietnamese man who left Hue for Vancouver decades earlier. The Hue in the story is a city partly remembered, partly fabricated, and partly pieced together from what the man could find on the internet. Though the man is Vietnamese, he shares my outsider’s gaze upon his homeland.

Wherever these stories are set, all of them required quite a bit of research, not only to capture the geographic setting but, in a broader sense, to capture worlds that I was not otherwise familiar with, such as the destruction of the Hue palaces during the wars, the various approaches to historical restoration, Vietnamese traditional music, etc. Even the stories set in North America required research – whether it had to do with grow-ops and grow-rips, the right subways to take to get around Manhattan, or changing a spark plug in the middle of a Winnipeg winter.

Philip Huynh was born in Vancouver to parents who had fled Vietnam during the civil war. His stories have been published in the Malahat Review, the New Quarterly, Event, and the Journey Prize Anthology and cited in The Best American Stories. He is the winner of the Open Season Award from the Malahat Review, a Glenna Luschei Prairie Schooner Award, and the Asian Canadian Writers’ Workshop Emerging Writers Award. A practicing lawyer, he lives in Richmond, BC. The Forbidden Purple City is his first book.

"A blare of sea horns and the thick stink of burnt

Penn Kemp is a performer, playwright and celebrate

Holly Allerellie is a Toronto-based illustrator an

Nicholas Bradley is a poet, literary critic and sc

Did you know a one-year subscription to EVENT is o

Tom Wayman's selected essays, If You're Not Free a

Finding the perfect gift for the writer in your li

We are holding our popular annual fundraiser book

"Sometimes, to be kind, you drown a memory. Lacque

Andrew French is a writer from North Vancouver. Hi

Jhordan Layne is a PhD candidate at Queen's Univer

Leah Callen is a Regina poet whose work has appear

We will be accepting Canadian poetry submissions f