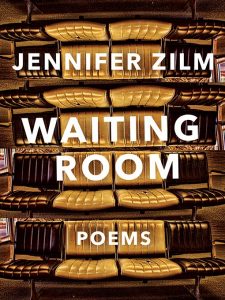 Vancouver-based Jennifer Zilm received a B.A. and an M.A. in Religious Studies from the University of British Columbia and was a doctoral fellow at McMaster University, where her (unfinished) dissertation focused on the liturgical and poetic texts in the Dead Sea Scrolls. A graduate of Simon Fraser University’s Writer’s Studio and the Humber College School for Writers, Zilm’s writing has been published in numerous journals, including EVENT, PRISM International, Prairie Fire, Grain, CV2, The Antigonish Review, Vallum and Women in Judaism and Poetry. Zilm is the author of two chapbooks: The whole and broken yellows (2013) and October Notebook (2015). Zilm has been a finalist for many contests, including The Malahat Review’s Far Horizons Award and CV2’s 2-Day Poem Contest. A draft of Waiting Room, her debut book of poetry (BookThug, 2016), was shortlisted for the 2014 Robert Kroetsch Award for Innovative Poetry. Learn more at www.jenniferzilm.com.

NGM: Can you tell me how erasure came into your collection, as in the technique?

JZ: There is something to me that is divinatory about erasure. How do I make meaning from the words available in a given text? What do I want to say and how can I use the words at hand to say it? My mentor at SFU’s Writer’s Studio was Jen Currin and she introduced me to the technique using Srikanth Reddy’s Voyager. Chelene Knight, who was in the Studio with me, did a really interesting erasure of Strunk and White’s Elements of Style that was inspiring. The piece in Waiting Room called ‘Riff on Canto Six’ was written when I was working at the front desk of an SRO hotel on Hastings Street. I was writing in my notebook, borrowing heavily from Dorothy Sayers’ translation of Dante’s Purgatorio and then realized halfway through that I should just do an erasure and see what came out. I was trying to capture the overwhelming chaos of the weekly binners street market, which used to occur every Sunday. The second half of the piece, which ends with the words ‘softest, turning,’ seem to me to be sort of the turning point or volta of the book. I also was in this strange situation where I had 150 pages of an unwritten dissertation. Often when you’re in the rarefied world of academia, outsiders will ask you what your dissertation is about and it’s impossible to summarize and condense, even when you’re trying to make it sound as non-specialized as possible. Then people in your field will ask the same question and you feel that it is not specialized enough. I felt like when this question was posed to me I didn’t even know the answer. So there is a longer piece in the book that is an erasure of parts of my unfinished dissertation, I tried to just follow sonic logic. So if anyone asks what the dissertation was about I can just direct them to the poem. Perhaps this satisfies no one either.

My sister told me a story: One time she was hospitalized and reading a novel. Another patient wanted to read with her but didn’t have her own book so had to choose from the ward’s small collection. The nurse came around and asked, ‘Well, what are you two reading?’ My sister said, ‘I’m reading…and Joann is reading THE DICTIONARY because it CONTAINS ALL THE BOOKS.’ Thinking about it like that, all we ever do is rearrange and erase words when we write poetry.

NGM: Is your erasure of your dissertation, which appears in Waiting Room, a compromise/confluence of trying to please everyone and no one as it relates to explaining your thesis? Does this question make sense?

JZ: Maybe. I also like the idea of reading old texts in order to discover what they ‘really mean’ or using them as divinatory tools to interpret the present means. Many of the Dead Sea Scrolls are line-by-line explications of biblical books, explaining how those ancient texts actually reflected what was going on in the present day (the first and second centuries BCE).. And of course this sort of biblical interpretation is practiced today (think books like The Bible Code or the biblical reading practices of the Branch Davidians or another millenarian-type sect). But this is done with other texts too. When I was writing the erasure I was also in a really strong writing program at SFU’s Writer’s Studio and the poetry cohort—all women; it began to seem as though the dissertation I had abandoned was really about the book I was going to write instead, and about my experience with these women. I particularly think this with respect to the line: ‘the offering of tongue unsurpassable/Use this verse as evidence, become evident.’

That poem is a cento, so every line is taken from a poem by another poet. I used sort of a chance procedure when writing it where I flipped through one of my notebooks (I have a dedicated reading notebook) and randomly placed my fingers on lines that had struck me from books of poetry I had been reading. So the line ‘Don’t give up the ghost. What we mean is’ is from Patricia Young’s ‘Heartsick’ and the line ‘attend’ is from Phyllis Webb (from her poem ‘Attend’ in Hanging Fire). The lines fit together (some I accidentally misread and some I changed for tense coherence). In library searches we think of keywords and if I was to pick keywords for waiting room they would be ‘listen/listening’; ‘attend/attention’; ‘wait/waiting.’ Paying attention and attending seem related to me. And a poem is a way of paying attention.

NGM: Can you tell me the backstory about ‘Daughter Cells’?

JZ: ‘Daughter Cells’ is a poem ‘about’ my sister. I put about in quotation marks because my sister delighted in saying ‘I love that poem because it’s about me,’ to which I responded (because there is still the need to put my baby sister in her place), ‘Poems are never about anything… poems are only ever about themselves.’ This is a pretty maddening, grandiose statement but I like it and it reminds of a quote I read from Marina Tseveateva: ‘There cannot be too much of lyric because the lyric itself is too much…a lyric poem is a created and instantly destroyed world.’

The idea that I could write about family members and get away with it came to me from Matea Kulic, who was in the poetry cohort with me at SFU’s Writer’s Studio. She is very gifted at bringing her family into her work and I was inspired by an inventive poem she wrote ‘about’ her sister. I had always shied away from writing ‘about’ my family.

Some of the lines of the poem I wrote while listening to Jan Zwicky read at Green College in 2013. Green College is on the UBC campus and is surrounded by fabulous coniferous trees and UBC is about as far west as you can get in this country before you hit the ocean. Eventually it became a poem ‘about’ my sister’s actual move across the country from Vancouver to Bracebridge in the Muskoka region (in B.C. we call Ontario ‘back East’ as though Scarborough is as exotic as Shanghai). Bracebridge is a tourist destination in the fall when people come to watch the leaves of deciduous trees change colour. In my post-thesis mode I was stunned by all the quick research I could do and how all these vocabularies were available to me. In a Wikipedia article about trees I learned that baby teeth are ‘deciduous’ teeth and that the separation of two daughter cells is called cytokinesis. Also it is my one poem with overt references to trees: I made a joke to Jay MillAr that I included because there is a law that you have to mention trees at least once in a Canadian collection of poetry, to which Jay responded dryly, ‘Well, that’s why I published it.’ My sister and I were born in a small town in Northern British Columbia but spent our childhood in Greater Vancouver with summer sojourns up north with our father and stepmother. Perhaps anyone who is the daughter of an angler knows that it can be a lonely experience at times. I remember watching our father wade into the Copper River as my sister and I waited on the bank. A lot of rivers in B.C. are pretty terrifying and my sister was blown away that you could actually swim in the Muskoka River without being pulled into the undercurrent.

NGM: In an interview you said you read only poetry for a year whilst writing Waiting Room. What were some of those books?

JZ: This is a slight fib. I read one novel and some books about poetry like Pinsky’s The Sound of Poetry and James Pollock’s You Are Here. Some collections were Noah Eli Gordon’s The Source (an epigram from the book opens Waiting Room); Anne Carson (Grief Lessons; Autobiography of Red; An Oresteia; Glass, Irony and God; If Not, Winter);  C.D. Wright (Rising, Falling, Hovering and One With Others); Ted Berrigan’s Sonnets, Frank O’Hara’s Lunch Poems; Jan Zwicky’s Forge; Phyllis Web’s Hanging Fire. I actually have a list on Goodreads under the heading 2013, which you can see here.

NGM: Is your book a manifesto on academia and anxiety?

JZ: Maybe. I like to think of it more of a how-to guide. It’s about doctors; who heals us and how we learn things; etc.

JZ: BookThug is wonderful. At the Toronto launch I kept saying stupid things to Jay and Hazel like, ‘Thanks for being like our parents even though you’re not even that much older than us!’ It’s the best cult ever.

Former Toronto author Nathaniel G. Moore is working on completing ‘The Original Catullus Trilogy,’ which consists of a novel and two poetry collections. He lives in Halfmoon Bay, BC.