Review: Sean Virgo’s Dibidalen and Barry Webster’s The Lava in My Bones

This review first appeared in EVENT 42/2

Barry Webster, The Lava in My Bones, Arsenal Pulp Press, 2012

Truth can be stranger than fiction, and fiction which dares to be strange often captures truths missed by more conventional narrative. In these two very different books, one a collection of linked stories, the other a novel, two Canadian writers draw on contrasting traditions to create fictions that stand outside the literary mainstream. 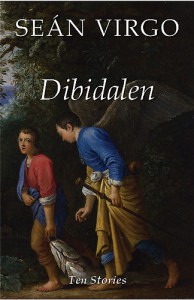 Sean Virgo is no stranger to experimentation. His lush 1987 novel Selakhi entranced and confounded reviewers in equal measure, and his stories and essays have continued to explore the limits of language in collision with nature, myth and mortality. Published by loyal, small B.C. press Thistledown, the linked collection Dibidalen eschews current trends toward minimalism and irony and instead takes as its theme nothing less than the persistence of narrative throughout human history, and the unceasing, transpersonal strangeness of consciousness itself.

The book begins with ‘Before Ago,’ a tale told in the pared-down phrases of a storyteller and laid out with as much white space as a free-verse poem. Its echoing, fairy tale-like narrative speaks of a boy who is sent off with a stranger to endure a series of challenges, only to discover that the source of the stranger’s songs is suffering itself: ‘The sun was coming up, and with the shadows came the cry of the Cat. It came from the boy’s own mouth.’

It is rare in this era of descriptive detail and tightly controlled literary voice to encounter in contemporary short fiction a language so unadorned and direct. Also rare is narrative which refuses to psychologize. Character is tangential here. In the stories that follow, Virgo traces a series of tales that elaborate on the trope of solitary seekers, whose curiosity and hunger carry them outside societal norms, tales that retain the generic, mysterious quality of myth or dream even as they grow more recognizable as contemporary fiction. Whether the seeker is a scapegoat, soldier, dreamer or priest, the journey brings them into contact with another world, which bristles with wisdom as well as danger. As they proceed, the stories also evolve from simple myth to more complex fairy tale, ghost story and ultimately postmodern, magic-realist narrative, each tale recasting what came before until a dizzying depth appears. This depth is not historical so much as temporal, and suggests the impossibility of understanding any given narrative, lost as its roots may be in a preliterate era, if not a preliterate segment of the human brain.

According to the Aymara people of the Andes, the future lies behind us, not ahead, and reading Dibidalen, I felt as if I were indeed reading backward, re-encountering with each story the resonance of what had come before. And by gesturing back to the roots of storytelling, Virgo’s fictions also point ahead to a place where story can once again re-engage with soul. In the words of a character in the collection’s penultimate story ‘The Likeness,’ ‘If we don’t work for the angels and the ancestors, there’s no point really.’

In keeping with this vernacular impulse, Virgo’s style is humble, easy and natural—‘There was a man found eggs in a field. One, two and three, the colour of stones in a pool’—and even as fable gives way to more developed story, his sentences retain a supple, oral quality, a spoken-ness that invites the reader to relax and simply listen, despite the increasing density of what is heard. As a reader I found it refreshing not to have to mentally congratulate Virgo on being clever (although the stories are steeped in intelligence) and to focus instead on the intensity of his images. In ‘Gramarye,’ an elderly, speechless woman stares into the enchanted mirror that reveals her child self, sipping the magical posset which will eventually kill her. The world beyond the mirror, through the doorway, or on the other side of the painter’s canvas is mysterious and terrible, these stories suggest, yet there will always be those who are driven to go there and bring back news of ourselves from the other side.

Not surprisingly, this news is sometimes difficult to summarize. ‘Dibidalen,’ the final story and the longest, is the most ambitious. Non-linear, as the dreaming mind is, and powerfully associative, it connects the tale of a hidden, ancient valley where diminutive, mouse-like people speak a forgotten tongue, with the lives of two travelers, one who settles down and one who still roams. Shifting, imagistic and inconclusive, it contains moments of more conventional narrative, moments that do not fully cohere. Yet my expectation that the story reach conventional closure is also at odds with Virgo’s apparent intent: to reveal the inadequacy of our current, shared notions of reality in a world so much stranger than character-based fiction allows. Will our stories survive us? The final image resonates: a mouse mother ecstatically nursing her children even as the scythe approaches through the grass. 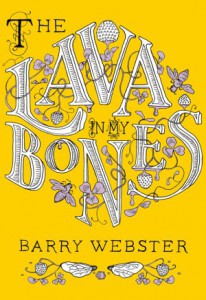 Barry Webster is also no stranger to experimentation. His first collection, The Sound of All Flesh, containing an award-winning story that debuted in EVENT, established his reputation as a writer unafraid to push his ideas to the extreme—and to crack us up doing so. Webster has now leapt into long-form fiction with The Lava in My Bones, a lush, baroque and brave investigation of human sexuality and sexual identity, which draws on surrealist fiction as well as fairy tale to create a world in which metaphor becomes literal and characters live out their inner lives through physical hyperbole, like heroic clowns.

Webster begins by introducing us to Sam, a Canadian geologist imprisoned for his imaginative excesses, who arrives in Switzerland to deliver a paper at a climate-change conference only to fall in love with Franz, a handsome, wealthy artist, who is so moved by his attraction to Sam that he eats the rock Sam holds. Thus begins Sam’s intense encounter with Franz, whose rock-eating leads to renewed painterly inspiration and ultimately to his temporary rejection of Sam, who meanwhile has begun to hear the fire at the centre of the Earth.

Sam is not the only character for whom nature becomes personal. His sister, Sue, bullied and socially excluded back in the small town of Cartwright, Newfoundland, where the siblings grew up, begins to exude honey from her pores, a secretion that increases with puberty and becomes life-threatening when her boyfriend almost dies sampling its delights.

What follows is a wild, shape-shifting narrative in which Sue becomes locked in a protective, honey-proof dress, and Sam escapes from a psychiatric hospital in Toronto and runs back to Newfoundland while simultaneously transforming into a wolf, after which the two siblings, accompanied unknowingly by their mother, end up on a cruise across the Atlantic, chased by swarms of bees. In other words, if you plan to read this novel (which you should), make sure your mental seatbelt is on because Webster sure takes some crazy swerves.

He is also funny. His humour is earthy and ribald, ranging from the siblings’ cross-dressed, yet religiously devout, mother racing around the cruise ship wielding samples of the Virgin Mary’s urine, to Sam’s deliberate goading of prurient psychiatrists: ‘The rocks remind me of bosoms…. Yes. Great, big lactating tits.’ The Lava in My Bones is a compelling read, propelled by virtuosic writing and surreal insight. While Virgo foregrounds soul, Webster foregrounds the body, specifically human sexuality and its connection to the vagaries of the natural world: ‘Sam felt the expansiveness of his own desires…a wonderful wilderness he could get lost in and explore for the rest of his life.’ For Webster’s utopia is one in which disguises, genders and costumes can be switched at will and endless combinations of desire are possible, such that the alacrity with which characters change species, switch genders and orientations resembles a pansexual vaudeville act, albeit one that is moving as well as entertaining.

The novel’s energy does flag in places: Webster’s aesthetic of literalness and excess works best in small, intense chunks, and over the long haul risks squandering its power through repetition and a lack of nuance. The Mr. Potato Head analogy, for example, comes around once too often, repeatedly assaulting the reader with the author’s theme of gender as performance.

Nevertheless, this is fiction that engages the mind, libido and funny bone, and with slightly less telegraphing of its intentions could leave even more room for the heart also to kick in. What touched me most about The Lava in My Bones was the hope these characters discover through their trials, and their faith in the honesty of the body and desire: ‘As his arms and legs flail in the fast-moving currents, he is confident that his body will save him, for it is matter, part of a universe that endures.’ As, we hope, is the human imagination, mysterious and fabulously weird.