This review first appeared in EVENT 42/2. 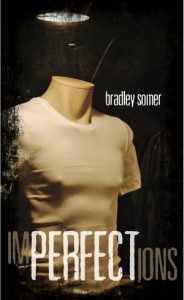 It is hard to imagine a more bizarre opening scenario: Richard Trench, the first-person narrator of Bradley Somer’s Imperfections, is an armless, legless torso in the trunk of a car. How on earth did he get there? What will happen to him? It takes over 200 pages to find out. Trench wonders if there was a turning point, something he could have done differently to avoid this fate. What follows is a seemingly innocuous conversation in a department store with a man who recognizes Trench from an undergarment ad that Trench did more than a decade previously—which is how the reader first learns that Trench was a model, even a supermodel. In fact, a mannequin in the store was actually cast from Trench’s body, though with some improvements and modifications: one of the book’s main themes. This conversation will reappear some 225 pages later, but its significance is not clear until several pages after that, nicely completing the story’s arc.

After that opening, the novel continues with Trench’s life story, beginning at birth (yes, there’s some willing suspension of disbelief at an infant’s articulate awareness). He is a somewhat dysfunctional kid in a somewhat dysfunctional family, which really is the norm except, perhaps, for his tendency to light fires. He has most of the usual adolescent experiences, including—and the full significance of this is not revealed until the end of the book—attending a freak show at a carnival. His big break comes when a fashion scout recognizes in him the potential to become a model.

What follows is largely a disquisition on imperfection and perfection—or to be more precise, the attempt to correct imperfection and create perfection through artificial means. In one of the novel’s most telling (and chilling) scenes, Trench accompanies another model to see a display of a century of breast augmentation. Her name is Stella Supernova—a clear signal to the reader that this is not a novel of literal realism. The displays are horrific, of course, but there’s a paradox: Stella herself has had a double mastectomy, and without the augmentation that produced her seemingly perfect breasts, she says, she would have died.

At times the novel is quite funny; it juxtaposes perfection and freakishness (ironically, the carnival freaks have been made freakish artificially); it explores what it is to live and not to have really lived; and it examines the ideas of predestination and fate. The paradoxes multiply: In one sense, events seem to occur utterly by chance—by fluke, even. But within the context of the novel, the threads seem interwoven. Real life can be like that. If this novel is satirical, as some of the blurbs and other reviews have suggested, the satire strikes me as scalpel edged.imper 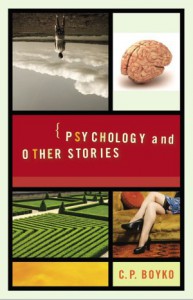 C.P. Boyko’s Psychology and Other Stories is genuinely and obviously satirical, at least in parts. It is also full of trickery, starting with the title: No story in this collection is called ‘Psychology,’ though psychology plays a part in all of the stories.

The first, ‘Reaction-Formation,’ begins as a satire of psychoanalysis. Archie, the main character, is barely postpubescent, and his psychoanalyst is determined to prove that Archie is repressing his latent homosexuality. Even when Archie makes up the most innocuous-sounding dreams, his therapist twists them into meaning what he wants them to mean. Absurd as this first part of the story might be, it introduces a key theme running through the book: interpretation—not simply of dreams, but of humans and their interactions and, most importantly, of texts. The story then shifts gears completely, becoming a satire on boys private schools. Parcliffe Academy, supposedly modelled on British public schools, has been established by someone who obviously had no knowledge of them whatsoever (the boys play a game they call cricket, which is closer to baseball than anything else, and whose rules are far from clear). Archie becomes friends with the most charismatic boy, and spends most of the rest of the story trying to figure out whether he is homosexual or not. Along the way he writes hundreds and hundreds of pages of a book, the excerpts from which sound much like The Lord of the Rings. He reads Walt Whitman, wondering if Whitman was homosexual or not; the story ends with his reading Lytton Strachey, breathlessly turning pages to see if a homoerotic encounter actually occurs.

The second story, ‘Eat the Rich and Shit the Poor,’ features a main character about as creepy as anything this side of Charles Bukowski. A compulsive liar—and thief, and cheat and more—he picks up two runaway girls who have missed their bus. Much of the story involves setting up the reader’s expectations as to what will happen, then defeating those expectations. The ending is a shock, but on reflection, it seems just right.

‘Paddling an Iceberg’ satirizes the self-help movement. Jim Bird is a competent, if undistinguished, scholar disgusted with self-help literature, so he decides to lampoon it. To his surprise, his book becomes a huge best-seller, and he is off on a successful new career. Bird’s premise, based largely on his academic reading of Nietzsche, is that you cannot change yourself, so don’t bother trying. Margo, an intelligent woman who has changed herself (at least somewhat) in the past, attends Bird’s sessions, and gradually realizes that they are mostly balderdash. At the end, though, the first-person narrator intrudes and apostrophizes at some length with regard to what he thinks about it all. The tone of sincerity in the apostrophe slightly jars with the satire; this could be more trickery, of course, or it could be an author who wants to make absolutely sure the reader gets the point.

‘Signal to Noise’ recounts the mental deterioration of a former captain of industry—his committal to an asylum and his inability to recognize it as such, the events that led to it, his family’s responses to it, and many flashbacks (as befit someone in this stage of dementia) dealing with his behaviour toward his daughter. The story provides insight into a degenerating mind—something of a modern day King Lear, but without the nobility.

An investigation of Sigmund Freud’s experiences with cocaine is the focus of ‘The Inner Life,’ though it takes several pages to learn who is doing the investigation. Devon combs through Freud’s published works, several volumes of letters, and boxes and boxes of confusing, contradictory material full of gaps. When did Freud start using cocaine? How much did he use? Why? When did he stop? Why? All these questions, it seems, are unanswerable, and then it turns out that the story is really about Devon and his depression. In many ways, this is an anatomy of depression—and again, the ending strikes just the right note.

The last story, ‘The Blood-Brain Barrier,’ consists of court transcripts of the examination and cross-examination of a psychologist, Daniel Strickland, a witness for the defence in the trial of a man who beat another man to death in a restaurant. These transcripts, however, are interwoven with narrative sections—wife-swapping, interviews with the defendant and his lawyer, domestic disturbances, car theft. The reader does eventually learn what triggered the attack, but not the outcome of the trial. Throwing the reader yet another curve, the story ends with Strickland visiting his mother.

The trickery is not over yet, though. The ‘Notes on Sources’ (which mostly read like nothing but endnotes) finishes with a final, if not completely unexpected, twist. If you read the book, read this last section to the very end. I’ll say no more.